Everything You Need To Know About The New Puffco Peak Pro 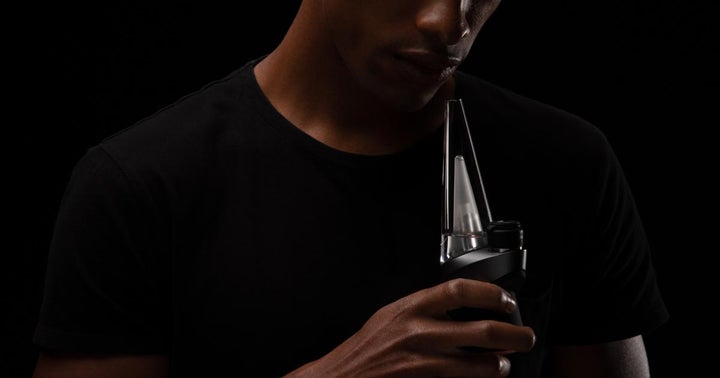 It's been two years since Puffco revolutionized extract consumption with the original Peak, an electronic dab rig whose chic design and simple operating system elevated dabbing from the basement of public perception to coffee tables across the country.

For those of us in the weed world, Puffco dropping the new Peak Pro is the equivalent of Apple dropping a new iPhone, complete with months of insider buzz, waiting lists, and a virtual event hosted by a floating CEO on a black background.

Unlike Steve Jobs, however, Puffco CEO Roger Volodarsky isn't selling a symbol of status to the mainstream. He's selling a status symbol to counter-culture, an altogether more difficult sell due to cannabis culture's inherent aversion to, well, being sold to.

In many ways, Puffco has done to analog dab rigs what Apple did to flip phones — created a hot, modern, and way more fun version of an essential gadget, accomplishing the same job but doing it much better. Aside from the birth of the vape pen, no device has had as much impact on the shaping of cannabis culture as the Peak.

By elevating the standards of product design, the Peak made one of the cleanest methods of getting high accessible to people who would never have been interested in it before. Though I identify as a super stoner, dabbing seemed impossible to navigate prior to the Peak.

Now, with its impossibly cool design and operating system that required little more than a push of a button, the Peak has opened my world to the benefits of extracts and concentrates, forever elevating my weed game.

While I've always viewed the Peak as a close to perfect product, the Peak Pro is that much better. Let's discuss.

What is the Peak Pro?

The Peak Pro is an electronic dabbing device that makes consuming concentrates as easy as pushing a button. As the first update to the original Peak, the Peak Pro further perfects an already stellar product by making subtle enhancements to both the design and technology that make this device such a standout.

What's new about the Peak Pro?

The changes Puffco made on the Peak Pro constitute everything you would want in an update like smoother hits, Bluetooth interface, and wireless charging, without changing the things that make this device so beloved in the first place. Let's break it down.

While not a visible change, the real-time temperature control feature is one of the most palpable upgrades in terms of the smoking experience, providing noticeably smoother hits consistently. Due to a new kind of sensor in the atomizer, the temperature is kept perfectly even, regardless of how hard you hit the device, or how much oil you put in it. I've noticed that the oil does not burn onto the bottom of the chamber as it used to in the original Peak.

Overall, the experience of hitting this device is markedly better than the prior version, and to me constitutes the single greatest improvement in the device.

While a bit of a pain to install, the Peak app is pretty cool. Compatible with both iOS and Android, the app allows the user total customization of the Peak Pro experience, as well as letting them know exactly what's going on with their device in real-time in terms of bowl temperature, battery charge, and so on. The new Peak Pro also comes with wireless charging, for an additional fee of $120. Honestly, it seems a little steep to me, considering the device is already pricey at $400, putting your total with the charging dock and shipping, etc well over $500. The dock is heavy, sexy, and beautifully designed, but it's definitely not a must-have addition.

Another big improvement, especially for the headiest tokers among us, is the much larger oil chamber. It was important not to overload the prior version, as it could cause the device to overheat and/or burn the oil, but the new heating sensor allows this massive new chamber to handle any amount of oil you throw at it, accommodating everyone in your sesh.

Puffco did a fantastic job of improving the aesthetic of the already beautiful Peak with its subtle, chic design updates. The glass is longer, thinner, and more elegant. Sweeping angles and curves in the base make it feel much better to hold. The oculus carb cap is perfect for taking cool dab vids, and the control over the LED lights is the definition of a crowd-pleaser.

What can you vape with the Peak Pro?

The Peak Pro is only compatible with extracts and concentrates.

How do you use the Peak Pro?

Here is what comes with your Peak Pro: To assemble and use your Peak Pro, you'll want to follow the straightforward instructions included with the device. Turning the Peak Pro on and getting it to the right heat setting is a breeze, but which setting you choose is where the nuance comes in.

The color of the light on the Peak Pro indicates the temperature setting, and those different settings are:

Use the highest heat setting if you have a particularly hard concentrate like diamonds, or if you're just looking to get as high as humanly possible. The higher the temperature of a dab, the more vapor it produces, and the stronger the high.

Red is my personal favorite heat setting, because it gets you extremely stoned, produces a lot of vapor, but preserves the terpene profile so you still get the full flavor of the extract.

Another favorite setting, especially for softer extracts like badders, green is great because it produces high-quality flavor, as well as enough vapor to make it feel like you've accomplished something.

The lowest of the low, use this setting if you are a novice user afraid of getting too stoned, or if you're trying to really experience the flavor of an extract. Low vapor production.

The Peak Pro is sleek, stylish, and works incredibly well, especially given all the recent updates. There is no comparable device on the market in terms of style and quality. Yes, it's expensive, but in this case, it's worth it.