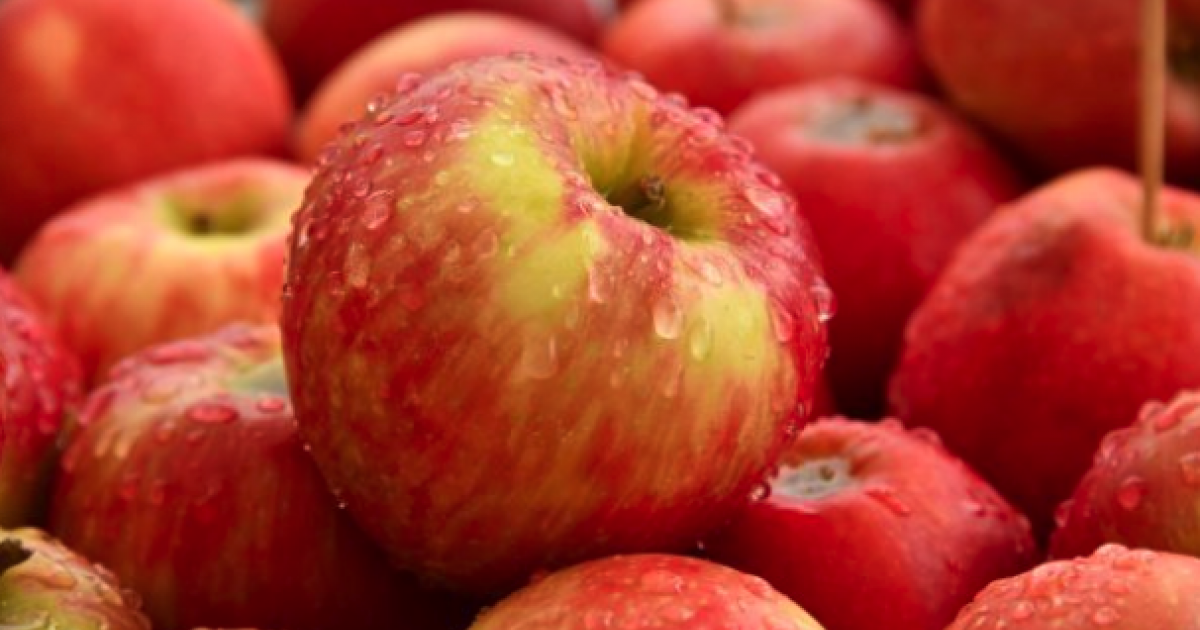 There are so many ways to smoke weed, and a whole world of variety to explore beyond the humble joint or bong. And if you think you’ve done it all, chances are there’s something in this list that will surprise you (corn husk blunt, anyone?). We’ve scoured the interwebs, and our personal experiences, for all the weird, wonderful and effective ways you can smoke weed.

Apples tend to be a staple in grocery stores across the country – so why not turn one into a pipe? You can use either a whole apple or slices, although the whole apple is the easiest method. Using a pen, carve out a hole halfway down the core of the apple, then another into the side so that the two holes meet in the center of the fruit. Place your dried marijuana flower on the top of the apple and inhale through the hole in the side. While the apple doesn’t affect the taste of the weed, it is a great way to avoid inhaling burning rolling papers.

A blunt is like a joint, only bigger. Rolled using a few extra standard rolling papers, or else blunt papers which are bigger and sturdier, blunts are a great way to pack in a bigger amount of bud for your smoking pleasure.

Bongs, also called water pipes, are large pipes that feature a water chamber designed to cool down the smoke before it hits your lungs. Bongs are said to produce a more buttery, smooth smoking experience that helps highlight the natural terpene profile. Usually made out of glass, bongs aren’t the most portable smoking accessory but can be an attractive decoration on your coffee table.

A bowl is the part of a pipe that contains marijuana, hash or other combustible materials. Typically located at the end of pipes, and coming as a separate bowl-shaped structure for water pipes like bongs, the bowl is an integral part of the week smoking process. Some bowls come fitted with mesh filters at the bottom to prevent burning plant material from traveling up the pipe and into the lung.

A bubbler is a pipe similar to a bong, only smaller. Often made of glass and featuring a water chamber, bubblers deliver the same benefits of a bong by producing cooled smoke, enabling a better apreciation of the subtle aromas and flavors of weed smoke. Unlike bongs, bubblers tend to be more portable, given their smaller size. However they tend to be delicate, so handle with care.

Also known as a “Wisdom”, “Chillum” or “steam” chalice, this pipe is used by Rastafarians as part of a spiritual practice. This water pipe can be made out of a variety of materials, often with a coconut forming the bowl, a ceramic bowl for the marijuana, and a ceramic grate. A length of bamboo creates the stem. While a chalice is similar to a bong, it actually functions more like a vaporizer, since bud is heated but not combusted, resulting in vapor instead of smoke.

With their paper-like texture, corn husks can be a great option for rolling a joint or blunt. Corn husks are available mostly in the fall during harvest season. While they are thicker than the typical rolling papers available in stores, they can be a great alternative for those seeking a totally organic smoke. For the best results, select corn husks that have been grown organically.

Dabbing involves a concentrated form of cannabis, known as dabbing wax, which is derived using a solvent such as butane or propane. Like any concentrate, dabbing wax is higly potent, generally containing between 50% and 95% THC. A range of methods and equipment can be used to dab, such as a dabbing rig which looks similar to a bong. The process involves heating dabbing wax with a torch until it produces vapor which is then inhaled.

More commonly known as a vape pen, e-cigarettes are sort of like reusable joints. They function by heating up a marijuana product, often an oil concentrate containing cannabinoids, to a point where the cannabinoids are released into vapor which is then inhaled. Vape pens are generally more discrete than other forms of smoking weed, are thought to produce fewer carcinogens than regular cigarettes, and can offer a more potent and flavour-filled experience.

Sometimes, rolling a joint from papers can be tricky. This is where empty cigarettes can come in handy. By emptying the tobacco out of a cigarette, marijuana can be added instead, or a combination of tobacco leaves and weed. Using an empty cigarette can also absolve you of the need to roll your own filter, since many cigarettes come with their own already built in.

In some headshops, you can purchase gas masks that come with a bong attached, with the pipe leading into the mouth. The idea is to pack and smoke the bong as you normally would, but the smoke remains in the gas mask as opposed to wafting away. Essentially, it is like a hot box for your face. While this might sound great, some speculate whether investing in a gas mask is really worth it, since the smoke you exhale will largely be inert, since most of the cannabinoids will have already been absorbed into your lungs at the first hit. But a gas mask is definitely a fun accessory to bring to a party!

Hookas are traditionally used to smoke shisha, or flavored tobacco. Yet hookahs work very well for marijuana, and function in a similar way to bongs. Smoke is pulled through a water chamber before flowing into pipes, of which there can be many on one hookah. Marijuana is packed into a bowl on top of the water chamber, then the bowl is covered over with aluminum foil and heated with hookah coals which sit on top of the foil.

Hot knives involve a cannabis concentrate, usually hash, which is placed onto a heated metal surface to produce a vapor which is then inhaled. Butter knives are commonly used, heated on a stove or using a torch. There are many techniques when it comes to using hot knives; one method is to cut a plastic bottle in half and place the hot knife and hash beneath the bottle, then inhaling through the mouth of the bottle. This helps to ensure that your mouth or face doesn’t get too close to the knife, which can cause burns.

In North America and other places, joints are the quintessential way to smoke marijuana. Dried bud which has been ground is placed into the crease of a rolling paper, and a filter is fitted into the end. An adhesive strip on the side of the rolling paper allows the joint to be sealed and safely smoked. A common mistake is to overfill joints or roll them too tightly – there needs to be sufficient airflow between buds in order to facilitate combustion. Light up and enjoy!

A one-hitter is a pipe designed to hold enough marijiana for about one hit. Coming in a range of styles, colors and materials, from wood to glass, one-hitter pipes are portable, discrete and a great way to get that quick hit from weed without having to save half-smoked joints (gross!). A one-hitter dugout is a one-hitter pipe that comes in a discrete box, often shaped like a flask, designed for discrete pot enjoyment.

It’s surprisingly easy to make pipes out of a variety of household objects  -even trash! A soda can pipe is both simple to make and a great way to get a second use out of your discarded cans. Making an indent into the can with your thumbs so that the can takes on a slightly boat-shaped appearance, create a series of holes – maybe ten or so – using a sharp narrow object such as a sewing pin. This is the bowl where you will place your dried but. Next, along the side of the can, make another bigger hole using a screwdriver – this is the inhalation point. All you need now is a lighter, and you’ve got yourself a brand-new (well, sort of) pipe at your disposal.

The major distinguishing feature of a steamroller pipe is the size of the carb hole. Because this hole is much larger than other pipes, it delivers a much larger hit of smoke. Steamrollers aren’t necessarily for beginners, or those who are sensitive to smoke. Steamrollers can be harsh, yet they allow the user to inhale a much larger dose of cannabinoids. And because of the short pipe distance, very little smoke gets wasted – which winds up being a cost-saving measure too.

Thai sticks are not only attractive to look at but pack a serious cannabis punch – thanks in part to the curing process required. This method of smoking weed has been around for centuries, and takes a little dedication but yields an impressive result, especiually thanks to the curing process which increases the potency of marijuana. Typically, dried marijuana buds are placed onto a toothpick-sized stick which is coated in hash oil. Then the whole stick is wrapped in fresh marijuana fan leaves and drenched in more hash oil. The stick is then cured for a period of week or even months.

Tinfoil is a versatile material that is malleable yet can retain a sturdy shape – making it good impromptu pipe material. This tutorial shows you step-by-step instructions for how to make your very own tinfoil pipe. Keep in mind that this pipe shouldn’t be used more than once, since the chemicals on the surface of tinfoil will be released each time it is heated up. So think of a tinfoil pipe as a one-time emergency option.

Pipes are made out of a variety of materials, the most common being glass – and if you’ve ever been to a head shop, it is glass pipes that will likely dominate shelves. However, wooden pipes do exist, and they come with a major advantage: they are much more durable than glass or stone pipes, so you can take them pretty much with you anywhere you go. It’s important to keep wooden pipes as clean as possible. Because wood is porous, it will absorb odors and can gum up easily with resin. Ensuring your pipe is clean will deliver better-tasting smoke.

When it comes to smoking weed, it’s hard to grow bored, given the plethora of options and methods to try out. Whether you’re looking for a quick fix, a new experience or just feel like getting crafty, there is a way to smoke weed that suits every occasion.

The Cannabis Green Rush: What Is It? Is It Over?