Nothing Silly About Psilly From Mushrooms And Its Medicinal Properties 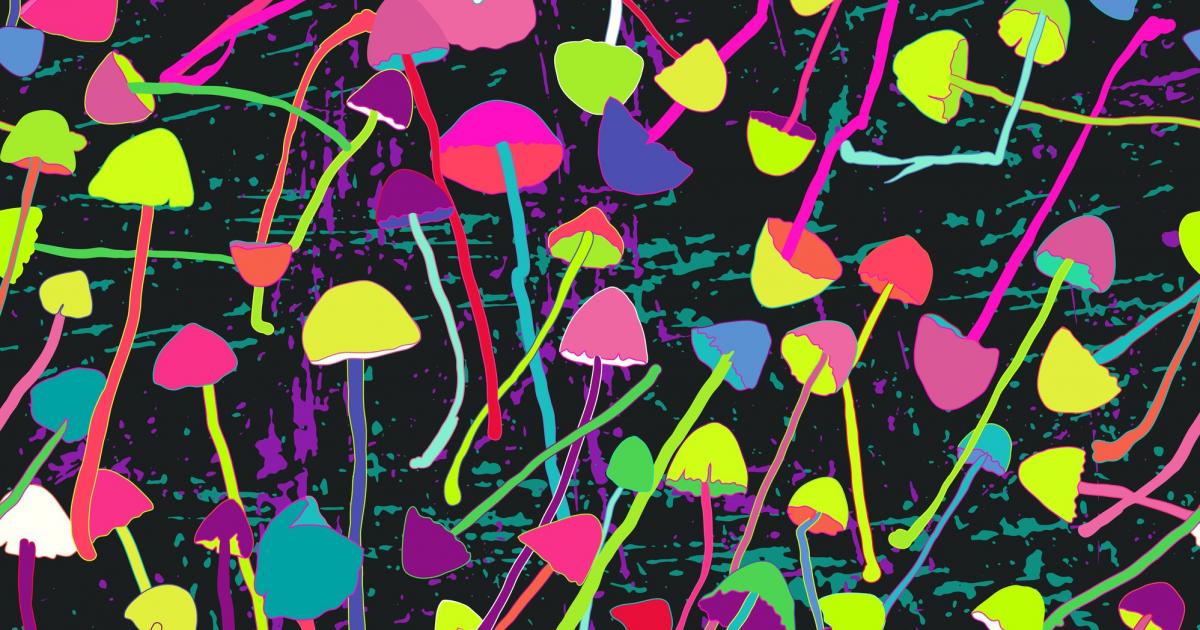 Like cannabis, psychedelic mushrooms have undiscovered medicinal potential. Together, they may have even more.

If you’ve ever suffered from a major depressive episode, you know how pernicious the disease is—how it sucks the color from the world, how it severs your relationships from the people and the things you once loved, how it makes even the simplest of tasks into Herculean efforts.

Over 16 million adults in the U.S. suffering from at least one major depressive episode per year. In recent years, the rates of depression have increased precipitously, especially among teens and millennials.

Up to one-third of those having treatment-resistant depression symptoms. Researchers are searching for new, resilient ways to treat the disease.

Today’s current crop of antidepressants can be very effective, but it can take time to find the right mix of drugs and the side effects can be distressing. Getting off antidepressants can be just as hard as getting on antidepressants. Depression, and related mental illnesses like anxiety and bipolar disorder, are complex disorders and illnesses that can be caused in part by underlying conditions, genetic predisposition, traumatic and stressful events, and environment.

One promising avenue seems to come straight out of the psychedelic 60s: magic mushrooms; or, as they’re referred to in more clinical contexts, the related psychedelic compounds psilocybin and psilocin. The Aztecs of Mexico referred to the mushroom as teonanácatl, or “God’s flesh,” for its sacred powers. The promise of psychedelics as a treatment for depression—and a whole host of other diseases and disorders—has gained traction lately among researchers, politicians, and activists.

While psychedelics like psilocybin mushrooms are Schedule I drugs according to the U.S. Government—meaning there’s a high potential for abuse–there’s an effort to change that. Researchers conducting trials into the drugs suggest that it should be reclassified as a Schedule IV drug, which would leave psilocybin in the hands of doctors and away from recreational users. The reclassification, however, would open up a whole world of possibilities for new medicinal research and applications.

Currently, psilocybin has been the focus of several research studies into its efficacy as a medical treatment. Highlights include:

One company is paving the way in advancing psilocybin research. Biotech holding company, Orthogonal Thinker, invests in companies engaged in cannabis, plant sciences, and regulated psychoactive compounds. The term orthogonal thinking was defined in an article by McKinsey & Company as a method of thinking “which draws on ideas from many spheres, can spur innovation and unexpected solutions.”

With a recent $2.5 million dollar investment, Orthogonal Thinker plans to further develop the company’s signature product Psilly, a plant-based prodrug of psilocin. EI.ventures, an Orthogonal Thinker’s subsidiary, holds the intellectual property rights for Psilly, which the company aims to bring to market in water-soluble pouches.

“This latest financing will allow us to further build upon our expertise in nutritional alkaloids, extraction methodology and developing foods that are clean label and we look forward to deploying our knowledge and products throughout the world,” said David Nikzad, Founder of Orthogonal. Some of those products may be based on combinations of cannabis and psilocybin. 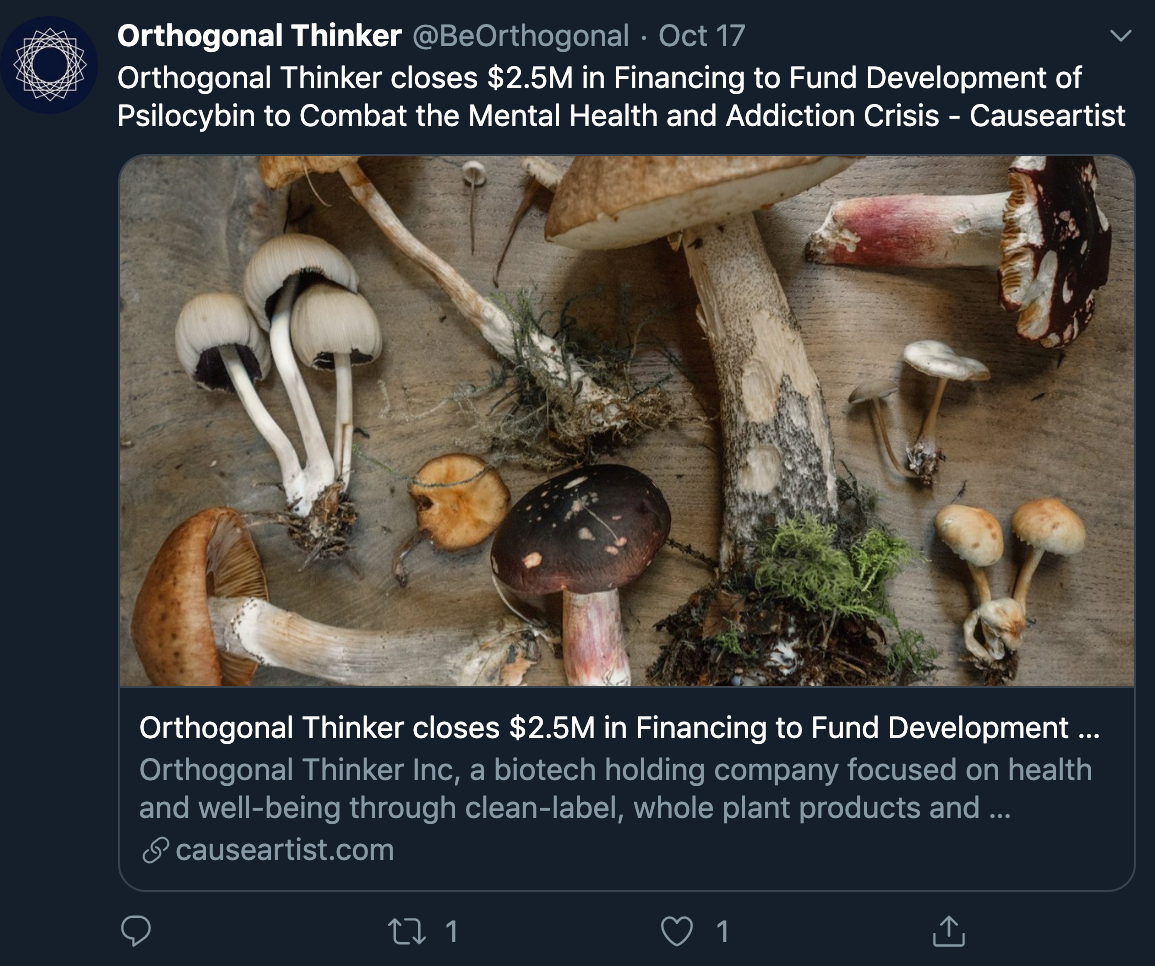 I spoke with Nikzad who explained his product is created with multiple nutritional alkaloids that have psychoactive compounds, like things like nutmeg and frankincense. “And we've been able to create a product that can be given out as low as like half a milligram that would allow you to go into like a one-hour therapy session and after, be able to still work and conduct your life,” Nikzad told me. “It's very clean, it metabolizes really well through the liver, it's a phenomenal product.”

After all, penicillin originates in mushrooms, the benefits of which have been the subject of research for thousands of years. “You can use psilly for anything, including alcoholism, and intimacy issues,” Nikzad continued. “It really opens up the neural pathways and allows you to what we call peel the onion.”

In one such onion peel, a small Johns Hopkins University study of just 15 long-term smokers found 80% had quit smoking six months after taking psilocybin. Double the rate of any over-the-counter smoking cessation product.

Greater access to medicinal fungi will allow the United States to conduct the type of research Israeli scientists have been doing for decades. Dr. Solomon Wasser, Professor Emeritus at the Department of Evolutionary and Environmental Biology at the University of Haifa has amassed huge libraries containing ingredients from mushrooms gathered over the years.

Those types of libraries may soon be filled with studies on the effectiveness of formulations that combine Psilly and tetrahydrocannabinol (THC) from the marijuana plant. Nikzad explained, “Specific alkaloids from specific plant can be used to create customized formulations.”

Both psilocybin mushrooms and cannabis work via an “Entourage Effect,” where the active ingredients contained in each, when combined, produce the unique effect. With mushrooms, multiple psilocybin derivatives can be combined to produce substantially different effects.

Nikzad imagines customized medicine isn’t too far in the future. “We envision in the next 10 years with deep learning,” he predicted, “we’ll be able to customize medicine for humans where you will go into a Whole Foods or you'll go into a dispensary and have an elixir created for you right on the spot.”

With concentrated research and development on the study of producing an entourage effect between the two species, more effects and applications can be discovered. And states and cities where both have been decriminalized offer greater access to the ingredients do conduct this kind of research. If you’re looking for the next “rush” to invest in, it just may be green with hints of off-white.