August Has Been A Bumpy Ride For The Stock Market Lately

It’s very difficult to say which direction the stock market will head in any given month. However, if recent history is any indication, investors should buckle their seat belts in the month of August.

As CNBC’s Carl Quintanilla pointed out on Twitter, the S&P 500 has moved between 2 and 6.3 percent in each of the last seven Augusts. 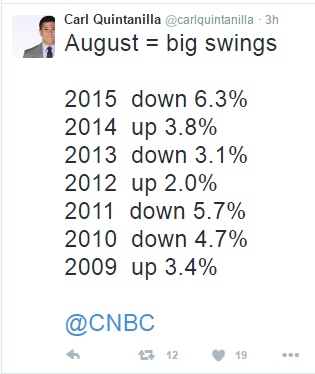 August 2015 was the market’s biggest move when it fell 6.3 percent on fears that China’s economy was cooling.

Since the beginning of August 2009, the SPDR S&P 500 ETF Trust (NYSE: SPY) is up 115.6 percent, yet the market has delivered negative returns during the month of August in four of the past seven years.

Despite the market’s tendency for large downswings in August, Quintanilla followed up with an encouraging tweet.

Since 2009, the S&P 500 has averaged a 1.5 percent decline in August. However, as Quintanilla pointed out, it delivered a 2 percent August gain during the 2012 election year.

So far this year the SPY is up 6.2 percent. The SPY gained 3.3 percent in July, but has kicked off the month of August down 0.27 percent Monday.

If you’re reading this on October 28, you’ll be happy to know that today is statistically the best trading day of the year. The S&P 500 has posted the largest gain on October 28 dating back to 1950. read more

4 Reasons The Stock Market Rally Could Resume In 2021

The S&P 500 got off to a shaky start to 2021 on Monday. Enrique Abeyta, author of the Empire Elite Trader newsletter, believes there are at least four reasons why investors should shrug off Monday’s sell-off and look for the 2020 stock market rally to resume in 2021. read more