For several years there has been a general agreement in the blockchain space that proof of work (PoW) isn’t the future of consensus models. Not only is it incredibly energy-intensive, but it’s simply inefficient with no ability to introduce scalability.

Instead, proof of stake (PoS) and its multiple offshoots implemented by projects such as EOS and Algorand appear to be the consensus method for most modern platforms. This despite the fact that proof of stake is now over eight years old.

For anyone unfamiliar with proof of stake, it’s a consensus method in blockchains whereby the nodes on the network have to make a kind of down payment, called a stake, for the right to validate blocks. Unlike proof of work, which requires that validators contribute a given amount of computing power, proof of stake replaces that “skin in the game” with network tokens.

The overall idea with proof of stake is that a validator with enough staked tokens will be sufficiently incentivized to act in the interests of the network.

So how has proof of stake been adopted and iterated over the years?

Peercoin - The Birth of Proof of Stake

Nxt and Blackcoin - The Early Adopters

It wasn’t long before the concept of proof of stake caught on. Nxt was the first to implement a pure proof of stake platform, that still runs today under the management of Jelurida, which also operates the Ardor blockchain. Nxt was launched by anonymous software developer BCNext at the end of 2013.

Nxt was swiftly followed by Blackcoin, which also chose to implement its own proof of stake blockchain following Peercoin’s proposal. Blackcoin went live in early 2014.

As tends to happen in the blockchain sphere, different projects put their spin on the original version of proof of stake pioneered by King and Nadal. One of the best-known is Daniel Larimer’s delegated proof of stake, implemented in his two major projects, Steem and EOS, the latter of which launched to much fanfare in mid-2018.

Unlike the original proof of stake where stakers are block validators, delegated proof of stake limits the number of people involved in producing blocks. Instead, token holders elect block producers with their tokens conferring voting rights.

Algorand emerged in 2017 and launched its mainnet in 2019. Somewhat confusingly, Algorand claims to have launched the first “pure proof of stake” blockchain. Naturally, those still involved with Nxt who worked on its development (namely Jelurida co-founder Lior Yaffe) take exception to this. Algorand’s claim also appears to have resulted in a confused discussion on Reddit.

To clarify, Algorand appears to have created its own definition of pure proof of stake, enabling the project to lay claim to being the first. A press release explains that Algorand’s pure proof of stake creates a “more egalitarian” version of the PoS protocol that successfully solves the scalability trilemma. 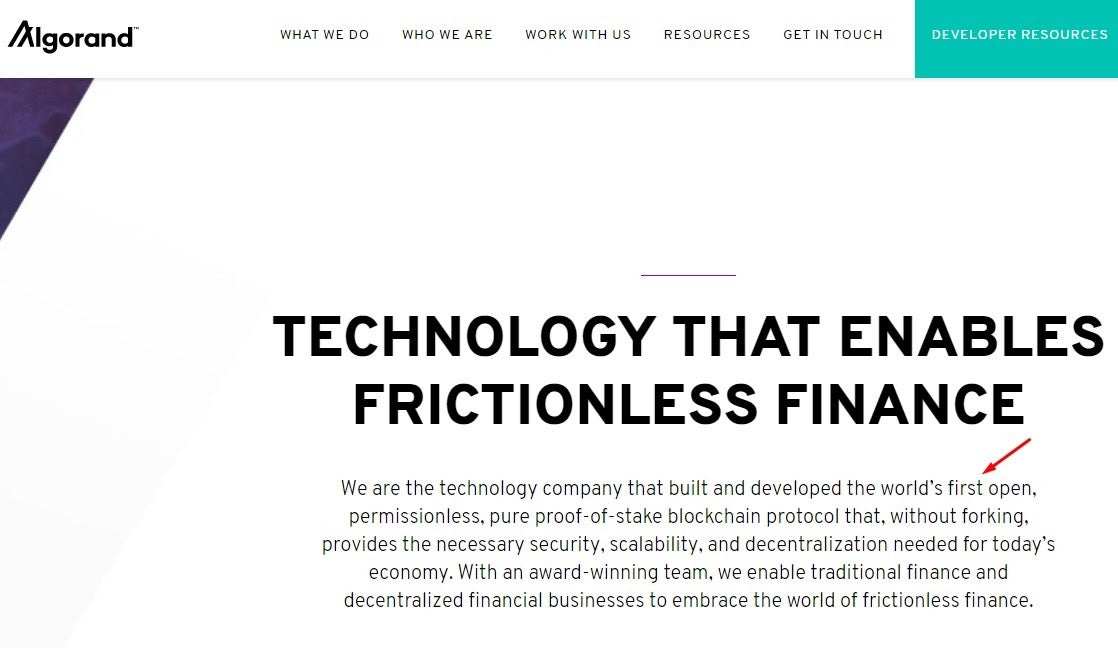 Leaving aside the fact that every new blockchain makes similar claims these days, it seems evident from Algorand’s explanation that the word “pure” doesn’t relate to any vision that King and Nadal had when they first described proof of stake. Instead, Algorand seeks to redefine the term proof of stake as a means of validating its claim to being the first “pure” proof of stake blockchain.

To put in simply, in any generally understood sense, Nxt was the first pure proof of stake blockchain.

Despite now having been around for eight years, nobody has yet managed to come up with a better consensus model than proof of stake. Therefore, projects that are now in the implementation phase are still opting for proof of stake as the consensus method of choice. These include Ethereum’s long-anticipated Serenity (ETH 2.0) upgrade, which will see the platform move to the first phase of its proof of stake consensus later this year.

Since 2012, Nxt, Algorand and other projects like them have recognized the value that proof of stake can bring to their platforms. While several have attempted to improve upon it, or even redefine it, King and Nadal’s proof of stake concept has plenty of time to run yet.

Visit Benzinga's Crypto Homepage - 1,000,000+ depend on Benzinga Crypto every month