Will Weed Vending Machines Ever Catch On? 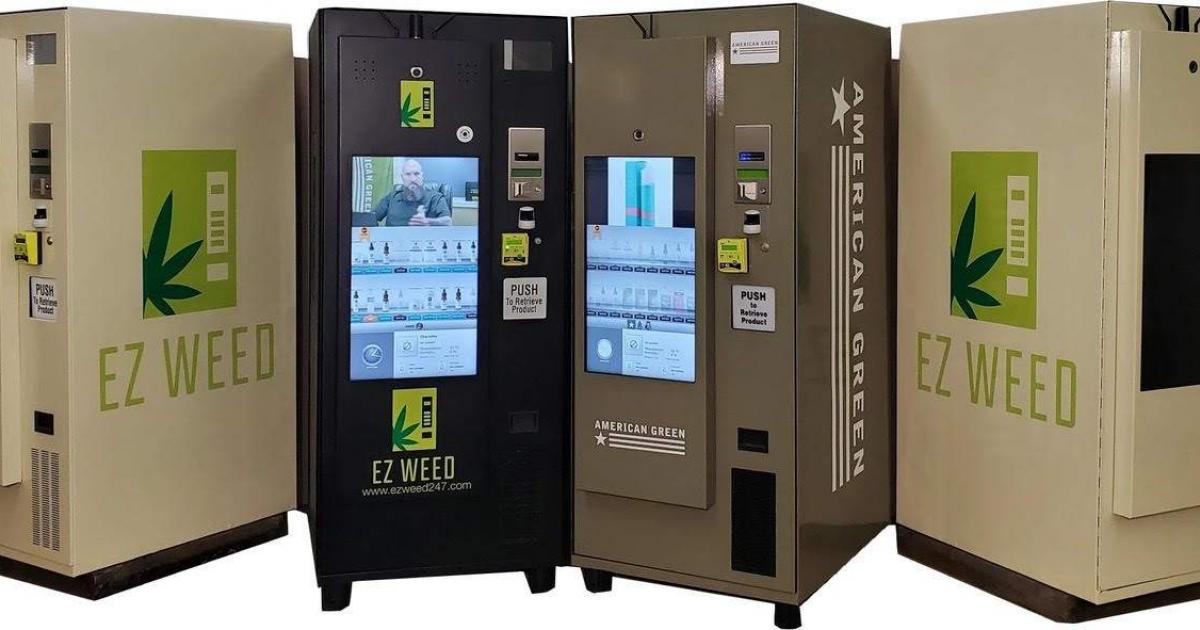 A few years back, EZ Weed was making the rounds with state legislators and local politicians, hoping to sell them on cannabis vending machines in dispensaries. Among its benefits, the company touted the fingerprint-reading technology the machines use to authenticate users. According to director of operations Richard Dow, “Three different lawmakers asked us, ‘What if someone cuts off someone else’s finger and uses that?”

Instead, EZ Weed opted for a technology that reads the veins pulsing under the fingertip. Everyone’s blood vessels are unique, just as fingerprints are, and the technology, according to Dow, is foolproof. Best of all for swaying paranoid legislators, “There has to be blood running through the finger for it to work,” he said. That is, the finger has to be attached to a living person.

It might seem redundant for a dispensary to house a vending machine filled with products that are also on the shelves. But in some cases, they could save dispensary owners’ money and customers’ time. But so far, they haven’t worked as intended.

In most states, the problem is technological: it’s not easy to make a machine that can do all the things budtenders do: Verifying customers’ identities, tracking inventory for government reporting and entering transactions into point-of-sale systems.

The barriers facing vending machine businesses are such that, after a few rollouts between about 2012 and 2015, most dispensaries decided to do without them. They didn’t live up to their promise of eliminating wait times, or freeing up employees to work with customers seeking advice and assistance. The business hit bottom in 2017, when the Securities and Exchange Commission charged MedBox, which Bloomberg Businessweek had earlier dubbed “the Walmart of weed,” with faking sales figures in order to mislead investors. (MedBox, which changed its name to Notis Global, agreed to settle.)

The problem was that “everybody rushed to market, and none of them were ready,” said Dow. As soon as the boxes, generally about the size of a refrigerator, showed up in dispensaries, the problems revealed themselves: authenticating IDs took as much work as it did at the counter; the machines’ software didn’t talk to the store’s inventory system, the state’s track-and-trace system or both. Plus, the devices were often glitchy, taking up the staff time they were meant to save.

Customer authentication was “the biggest stumbling block by far,” said Dow. Fingerprint sign-in was kludgy. EZ Weed considered facial recognition or retina scanning, but “nobody wants their face or eyes scanned,” he said.

EZ Weed worked with  American Green to devise a solution. That company makes the machines and sells them to EZ Weed, which then makes deals with dispensary owners to place them in stores, and provides maintenance. American Green has itself been in the business since the first wave. In 2014 and 2015, it marketed the ZaZZZ, which was the first vending machine used by a REC dispensary, Herbal Elements in Avon, Colo. Neither the ZaZZZ nor Herbal Elements still exist.

One problem with the ZaZZZ was that, like some other machines at the time, it authenticated customers by having them swipe their drivers license and, if necessary, their MED card. “Fake IDs are fake IDs,” said Lindel Creed, a vice president at American Green. A sales clerk, he noted, at least has a chance of spotting a fake. But with a machine, he said, anybody can scan any ID card, such as their older brother’s. That’s what sent American Green and EZ Weed looking for alternatives.

Nearly every decision a dispensary owner makes takes into account whether it might mean regulatory trouble.,Up to now, at least, the machines simply posed too much of a risk, and not nearly enough benefit.

Regulators look askance at anything that might allow customers to go over whatever purchase limits are imposed in a given state. (In California, for example, the limit on flower is one ounce per day). They’re also wary of anything that might muck up a the software they use to “track-and-trace” licensed product.

EZ Weed claims it has solved the big problems. Time will tell: the company is just starting to roll out the machines in test markets. The company, backed ex-NFLer Lamar Houston, now a venture capitalist, says “some of the top dispensaries in the U.S.” will house the machines. The company hasn’t yet revealed them.

The machines look pretty cool. About the size of a fridge, they sport a screen that shows the product inside. In the case of flower, customers see the actual buds, not just the package they’re in. Generally, vending machines contain the most popular products, and those that people buy regularly, such as the biggest-selling pre-rolls, edibles, and vapes.

EZ Weed launched in January, “just in time for Covid,” Dow said. The machines, he noted, eliminate the need for human contact, at least after the first transaction. Once a customer is verified, they don’t need to show ID again: Just touch the vein-sensor and choose the product.

The machines even take credit cards, thanks to EZ Weed’s relationship with a company that acts as a buffer between weed businesses and the cannabis-shy bankers (an increasingly popular solution). According to Dow, transactions take three to five minutes, while some customers who buy at the counter can wait 15 to 45 minutes.

EZ Weed also created software so that the machines are, according to Dow, “plug and play,” and can work immediately with most store point-of-sale systems and state tracing systems. The ultimate test of the technology, he said, came in Arizona, which created its own track-and-trace system. “If it can work with government software, it can work with anything,” he said.

None of this has been tested at scale yet.

Matthew Frost, CEO of anna, which makes a vending machine of the same name, agreed that government regulation is the biggest challenge for pot vending machines.  He emphasizes the importance of build relationships with regulators and politicians. “Tech isn’t what regulators want to see,” he said. “The idea is that we don’t want to reach into anybody’s refrigerator without asking,” he said. In other words, it’s a bad idea to just plop the machines into dispensaries and hope they’ll work, and that regulators will be OK with them. Like EZ Weed, anna is just starting to roll out its machines in test markets.

It seems clear that the widespread adoption of vending machines will require functional tech and comfortable lawmakers. (The need for social distancing could help with the latter.) The long-term aim, Frost said, is to “normalize” cannabis in the minds of both the public and political leaders, so that it’s treated just like any other adult-aimed retail industry.

Creed, of American Green, agreed. Lawmakers need to be assured, he said, that “we’re not looking to put a vending machine on every corner and sell weed out of it.”

This article was originally published on WeedWeek, and appears here with permission. After a year of delays, the city of Los Angeles is set to begin accepting applications for multiple types of cannabis licenses. Some see the development as a promising sign for a process that has been marred by frustration and litigation. read more