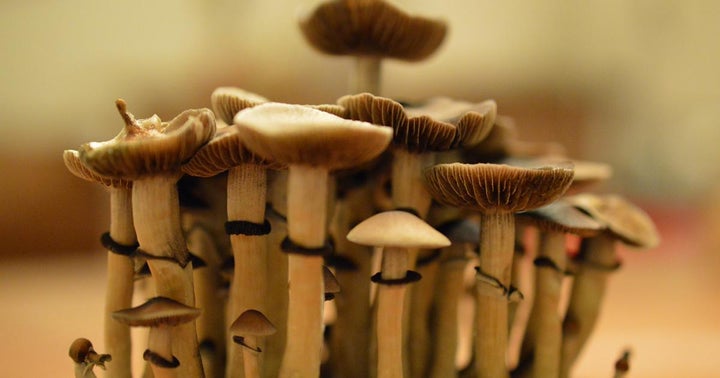 With the decriminalization of psilocybin, it's hard not to wonder whether magic mushrooms will follow the path of cannabis.

Imagine the sinking feeling that would barrel down your gut at the sight of DEA agents waiting at your door as you leave for work in the morning. Count the things they seized from your apartment: a notebook, an iPhone, a computer tower, a few graphic t-shirts, 906 live psilocybin mushrooms, and just over 20 ounces of dried shrooms. Late for your job in the legal cannabis industry, you begin to wonder what’s so bad about selling some homegrown medicine? After all, the city had just decriminalized psilocybin (the main psychoactive compound in magic mushrooms), and it’s only a matter of time before it’s sold in storefront shroomeries just like cannabis.

That is how Kole Milner spent one September morning, just five months after citizens voted in May of 2019 to decriminalize the possession of psilocybin mushrooms in his hometown of Denver. The agents never arrested Milner, though he knew exactly what he was doing: By his own admission he’d been selling psilocybin mushrooms, on a publicly accessible Venmo account—long before the Denver Psilocybin Initiative had them deemed the lowest level crime he could commit in the city. He had even told reporters at the Denver Post, NPR, VICE, and Westword what was growing mushrooms in his closet, while wearing a shirt branded with his own one-of-a-kind logo for a company called Happy Fox Edibles.

Even so, Milner still hasn’t been charged with a crime, despite having led law enforcement right into his living room. The investigation is still ongoing according to Jeff Dorschner, a spokesman for the US Attorney’s Office for the District of Colorado. This leaves open the possibility that Milner could face criminal charges, but his non-arrest in a city that now considers the possession of magic mushrooms to be a minor offense leaves us wondering when—if ever—psilocybin will be legal enough to sell.

“I believe it will be a long time until we see psilocybin dispensaries,” says Kevin Matthews, the architect of the ballot initiative that decriminalized psilocybin in Denver County last spring. “Anything is possible, but we have a tremendous amount of public education and data-collection to do before we can start having a serious dialogue about retail psilocybin.”

A synthetic version of psilocybin has already been granted “breakthrough therapy” status by the FDA to accelerate its route to market as a prescription medication for use in assisted-psychotherapy for depression. The nonprofit organization Usona and the for-profit company Compass Pathways are behind this drug development. Meanwhile, scientists at institutions like Johns Hopkins or New York University are also researching psilocybin for addiction, mysticism, anorexia, and various other applications.

The pharmaceutical model, with all its exclusivity, encourages people like Milner to continue growing mushrooms at home in order to avoid high price tags and to circumvent the need for a prescription, especially without a qualifying diagnosis. It may even push those who don’t qualify for the FDA-approved treatment to seek out people like Milner as caregivers to facilitate access to the psilocybin they need.

The pharmaceutical model, with all its exclusivity, encourages people like Milner to continue growing mushrooms at home in order to avoid high price tags and to circumvent the need for a prescription, especially without a qualifying diagnosis.

“That was the pretext under which California’s medical marijuana system was operating, people were characterizing themselves [to the courts] as caregivers,” says Noah Potter, an attorney and founder of the New Amsterdam Psychedelic Law blog. When the courts ruled in favor of the patients seeking that care, California set a new standard for medicine and put cannabis on the path to legalization. “A patient could use that defense and a caregiver could use that defense,” Potter explains, though he admits it’s a long shot for psilocybin.

In Canada, which has had a similar success story for medical cannabis, legalization activist Dana Larsen is doing exactly that: offering a highly publicized caregiving service in the form of his microdose psilocybin dispensary, in the hopes that the courts will recognize it as medicine the same way they did for cannabis.

But even Larsen, who’s spoken openly to many of the same media outlets as Milner, is weary of bringing his business model to the US. He thinks that a mail-order system like the one he publicly advertises is, “very risky in the United States.” That’s because the US Postal Inspection Service, a special law enforcement arm of the USPS, routinely searches US mail for potential trafficking—not to mention that a business that promises to deliver across state lines is also sending an open invitation to the DEA to enforce the federal law.

On the other hand, storefront locations are limited to sales only within a single jurisdiction, like Denver County, and would be coloring within the lines of what the DEA might tolerate—the same way cannabis dispensaries have franchised across the state (where cannabis is legal under local law) with relatively little interference from federal agents.

“You don’t see on the news every day that the DEA has gone in and taken down a [state-legal cannabis] dispensary, but you will see that where people are operating in the black market,” says Randy Ladd, a spokesman for the DEA’s Denver Field Division, referring to businesses that might use their state or local license to cover for other criminal activity or go beyond what the regulations allow. Ladd emphasizes that the DEA usually targets large-scale operations and claims that agents usually find other substances in the cannabis dispensaries they raid. “When we do go after dispensaries, it’s because they are operating in the black market and are using their local and state licenses as a cover to violate the law.”

Finding that happy medium between what the police will tolerate and what will force them to come knocking on your door is part of the complex work that Kevin Matthews is currently doing.

Since the passage of his decrim initiative, there have only been two city-level arrests and the individuals involved were minors who aren’t covered by the new rules. “Law enforcement is not concerned about psilocybin, unless the arrest data starts to change,” says Matthews, pointing out that mushrooms aren’t often connected to organized crime, violent offenses, or any other law enforcement priorities that would force the police to crack down on the substance. “City officials have been open-minded,” he says.

In working with local lawmakers and police, Matthews is aiming to craft a system that everyone can be comfortable with—which means that, realistically, shroom dispensaries will be but a distant dream. Of course, it’s also worth asking whether shroom shops that follow the example set by cannabis are a dream worth having at all.

“If we’re keeping inclusivity and equity in mind, then the current licensing model for cannabis is not a good model for psilocybin,” says Matthews. It’s a model that leaves people like Kole Milner out of the equation because homegrows aren’t likely to be licensed to sell, and regulations are often intended to eliminate the underground market.

Still, anything is marketable, Potter tells DoubleBlind, pointing out that water has been branded and packaged for mass consumption. But before we go ahead and bottle up another part of nature, perhaps we ought to ask if it’s a good idea, and whether entheogens like psilocybin are even meant to have a retail option.

“Everything we’re doing now is modeled off the market for some other substance and psychedelics don’t necessarily match up one-to-one with other substances,” says Potter. “You don’t go to a bar and take a shot of whiskey and then wait an hour for it to take effect. It also takes a big chunk out of your day, in that you’re going to have a five-hour trip.”

In many cases, the legal cannabis industry has used alcohol and tobacco as their model for a legal market. In turn, it’s tempting for the coming psychedelic industry to use cannabis as theirs, but this approach might be just as flawed as the Controlled Substances Act which places fundamentally different substances in the same category, making the false assumption that a drug is a drug is a Schedule I drug.

In many cases, the legal cannabis industry has used alcohol and tobacco as their model for a legal market. In turn, it’s tempting for the coming psychedelic industry to use cannabis as theirs, but this approach might be just as flawed as the Controlled Substances Act which places fundamentally different substances in the same category.

If the psychedelic community plans to mirror what the cannabis industry has done, substances like psilocybin will have to become a consumer product. They’ll have to do what marijuana did when it became the more marketable, mainstream, even sterilized, version of itself: cannabis. Venture capitalists will swoop in to water down the culture that’s evolved amidst the freedom of an unregulated black market and to adopt new branding for centuries old practices. A retail model might reject the curandero in favor of an over-the-counter salesman, who clashes with the segment of the population that doesn’t want psychedelic culture to change, but to be accepted as it currently is. Many would prefer to have the same freedom the black market has provided, rather than a rebranding of their lifestyle—and it shows in the fact that California’s underground cannabis market has outsold the tightly regulated market three times over, even after legalization has taken effect.

A retail model might reject the curandero in favor of an over-the-counter salesman, who clashes with the segment of the population that doesn’t want psychedelic culture to change, but to be accepted as it currently is.

Selling cannabis or psilocybin as though it’s alcohol or tobacco goes a long way to making it legal, but it also creates a competing market where one already exists and will continue to exist, in spite of the law.

“People will continue to grow and sell as they have been before we had decriminalization,” says Matthews. “What’s important is that the general public has more direction and access to information to be well-informed about responsible personal use.”

Creating a retail model for psilocybin might require us to ignore the fact that there is already a resilient market for mushrooms. We know that existing market works because Milner was, allegedly, making $2,000 a month out of his apartment even before psilocybin was decriminalized. We know it works because there is an entire underground community that understands the importance of set and setting. A community which would function just as well within the law as it has without it. If the DEA ever wants to stop raiding closets they found on social media, Kole Milner may not be the enemy, but rather the model for legalization.

Miro Tomoski is a Canadian journalist reporting on politics and drug policy. His highway journalism covers American presidential campaigns as well as legalization efforts across the U.S. and Canada. Follow him on the road, on Instagram and on Twitter.