Financial jargons are always tough to decipher and make sense of, sometimes catching even seasoned investors off guard. However, it always pays to get into the thick of things, just to be sure of what you are doing and how you can make the most out of a situation.

One of the most-often thrown around discussion when it comes to finance is the difference between gross and net.

The gross versus net debate is all pervasive, finding its way into the life of even ordinary citizens, who have a source of regular income in the form of wages and salaries.

Gross literally refers to the total, whole, entire, complete or full, while net refers to what remains after deductions such as charges or expenses.Financially, the meaning of gross and net varies depending on whether it is related to a business or a wage earner.

Explaining with Apple Inc. (NASDAQ:AAPL)’s recent financial results, gross profit or gross margin for the June quarter is $17.49 billion, which is the amount got by deducting the cost of sales ($27.92 billion) from the net sales ($45.41 billion). 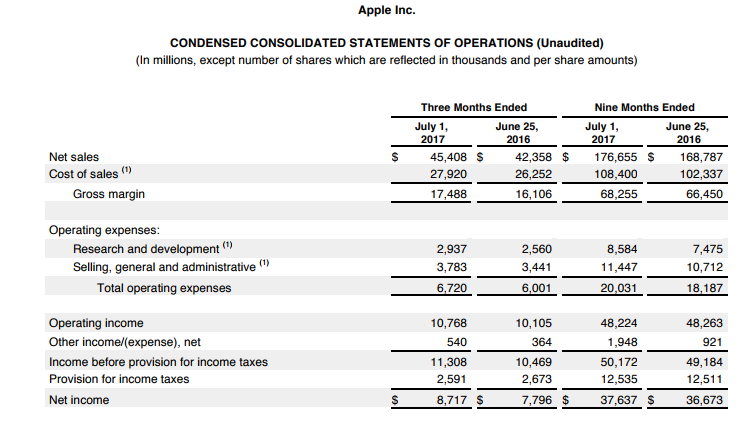 Meanwhile, net income of $8.72 billion is arrived at by deducting operating expenses ($6.72 billion) and provision for income taxes ($2.59 billion) from the gross income ($17.49 billion).For a wage earner or a salaried professional, gross income is the wages or salary paid to him by an employer before any deduction. However, net income is what he gets after all mandatory and voluntary deductions are made.

We do have the gross and net concepts coming into the picture at the macro level. Gross Domestic Product, widely referred to by the acronym GDP, is the sum total of all goods and services produced in a country in a specific period, while NDP, or Net Domestic Product, is GDP, less depreciation of all capital goods in the economy.

Meanwhile, analysts and accountants calculate two derivative numbers out of the gross and net profits, which are profitability measures or ratios used to measure the financial strength of a firm.

The latter is preferred to the former, as it gives a clearer picture of the overall expenses of a company, which will come in handy when the company is seeking to rein in costs due to inability to increase profits by shoring up the top line.

Below, we'll example what gross income and net income looks like for individuals, companies, and investors.

For an individual, a clear picture of the net income, which is the money coming into your personal household, and the items that bring in variance between the gross income and net income is a sine-qua-non for assessing his/her financial might.

Some of the deductions to calculate the net pay include federal and state taxes, social security taxes and pre-tax benefits such as health insurance premiums, commuting costs etc.

Meanwhile, mortgage companies take into account the gross income of an individual when assessing his/her ability to pay off the mortgage. Since most deductions, except for taxes, are voluntary payments, lenders proceed on the rationale that borrowers can stop these payments if they are constrained to make mortgage payments.

For a company, gross profit is the most uncomplicated way of calculating the viability of a business and its revenue potential.  Meanwhile, net income gives an overall picture about the financial health of a firm.

Usually net profit margin is assessed from two perspectives, by comparing with the past period and with competitors.Consistently clocking low gross margin percentage, relative to competition and its past performance, might wave a red flag for a company, signalling to it that it has to do some serious rethinking of how it conduct its business.

An investor might have to consider the two profit measures in unison to see if the profit performance is of good quality. Sometimes, if the gross profit remains static but there is an increase in net profit, then it could mean the company either managed to record some income unrelated to its core business, which is often categorized as ‘other income’, or has cut down on its operating expenses.

Conversely, if the company is growing gross profit but is unable to boost the net profit, it may be experiencing inflation in operating expenses, or losing at least book money on depreciation or amortization or real money on taxation. It could also suggest that the company might be incurring expenses unrelated to its main business, classified as ‘negative other income.’

Thus, a gross versus net debate always ends in the verdict that both have their own merits and demerits. The best course to follow is to consider both, and if there is a variance in either the magnitude or direction, analyze the reasons for the same

Q
Is net before or after taxes?
A

Net refers to the amount left over after deductions, which includes tax deductions.