Chart Of The Day: The Fed's Latest Conundrum

While the financial press is making much of the Federal Reserve’s “dilemma” over whether, and when, to raise interest rates this year, it still seems pretty clear that "dilemma" may be too strong a word.

Many have argued that the unemployment rate has fallen so much that wage inflation should begin to be an issue, as the shrinking pool of available workers gives current, and prospective, employees the power to demand higher pay (wage inflation).

Not coincidentally, economists argue that once that happens, broad measures of inflation begin to move higher, requiring the Fed to raise rates, cool the economy and, thus, keep inflation in its mandated box.

But, as the chart shows, the most commonly referenced unemployment rate (U-6) has fallen toward recent lows, broader measures of unemployment, and underemployment (U-12) remain considerably higher than normal, representing excess slack, and thus, little inflationary pressures in the labor market.

Add to that an inflation rate, seen at the bottom of the chart, that remains well below the Fed’s 2 percent target, and it’s hard to argue for a preemptive strike against inflation.

The Fed says it will be “patient” in deciding when to raise rates.

As often stated, “patience is a virtue." 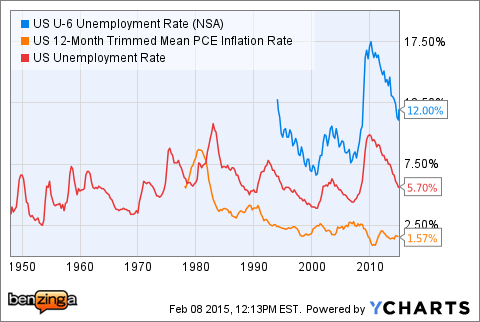 CVS Health Corporation (NYSE: CVS) shares have once again run into resistance at the $76.50 level and may be about to move lower. read more

This Fisker Stock Technical Level Is Key For A Bullish Turn

Fisker Inc. (NYSE: FSR) is trading higher Tuesday after BofA Securities initiated coverage on the stock with a Buy rating $31 price target. Below is a technial an read more

Successful trading is hard. Robinhood traders are learning a tough lesson as many of their favorite stocks break down. read more