“Patient” is the key word there because it could take a while for Mexican stocks to find their groove. Year-to-date, EWW is up 4.1 percent. On its own, that does not sound bad, there are five other major single-country ETFs devoted to Latin American economies, and EWW is a dud relative to all of them this year.

EWW's returns would have be multiplied by more than 16 times for the Mexico ETF to keep pace with its Brazil and Peru counterparts. Equivalents tracking stocks in Argentina, Chile and Colombia are also easily topping EWW. Not to mention the MSCI Emerging Markets Index, which is offering nearly quadruple the returns of the Mexico ETF.

Some market observers believe part of the reason Mexican stocks are lagging is attributable to the vitriol aimed at the country by Republican presidential nominee Donald Trump. With politics at play, S&P last week lowered its outlook on Mexico's sovereign credit rating to negative from stable.

“Trump has said he would make Mexico pay for a wall to prevent illegal immigration. He also promises to slap tariffs on Mexican goods, threatening the North American Free Trade Agreement and U.S.-Mexico relations,” according to Barron's.

Knowing that Democratic nominee Hillary Clinton is leading Trump in essentially every reputable poll apparently is not enough for investors to take the perceived risk on Mexican stocks. Not with the possibility of Trump pulling the upset.

Still, investors have added more than $116 million to EWW this year, or about $16 million than has flowed into the equivalent Chile ETF. However, flows to the rival Brazil are more than five times greater than EWW's year-to-date inflows.

Although Mexico is a major commodities producer, EWW's direct exposure to commodities is not as high as other Latin America ETFs. Sure, the materials sector is 14 percent of EWW's lineup, but the Mexico ETF is more defensively positioned with a combined weight of 39 percent to defensive consumer staples and telecom names, leading to an earnings multiple that is often higher than traditional emerging markets benchmarks.

“Mexico’s central bank has raised interest rates three times since late 2015 to shore up the peso, which has fallen more than 6 percent against the U.S. dollar this year,” according to Barron's. 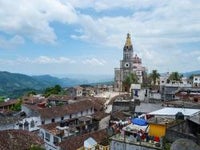 Some Mexico ETFs Have Endured Trump...Sort Of