Coffee prices and coffee retailers appear to have an inverse correlation, and a strong one at that, according to Bloomberg.

Therefore, continuing with this line of logic, if coffee prices rise, Starbucks, Green Mountain and other peers in the space are likely to see their numbers hit.

Looking Into The Commodity’s Dregs

Broadly speaking, there are two things investors need to be aware of when considering coffee and its related retailers:

As the largest producer and exporter of coffee, Brazil’s weather in particular drives coffee’s prices. Over the past year, substantial rains in Brazil have benefited the commodity’s crop prospects and therefore lowered prices. According to Bloomberg, “After surging as much as 11 percent to 2015’s high in mid-January, rains in Brazil improved crop prospects and prices are now the lowest since February 20154. That followed the country’s most-severe drought in decades, which damaged crops in early 2014.”

Regarding the different types of coffee, the two predominating species are Robusta (coffea canephora) and Arabica (coffea Arabica). “The former is a sturdy tree with a high yield of beans with high acidity and bitterness and low aroma,” explained FRED (the Federal Reserve Bank of St. Louis), “The latter is a shrub less resistant to disease with a lower yield of beans with lower acidity and bitterness and strong aroma.” Why this matters to investors is that the price of coffee beans is different based on the species. “This can be confirmed by looking at their market prices […] except for 2 of the past 430 months, the price of Arabica has always been above the price of robust. Second, the gap between the two prices seems to be widening since 1986.” 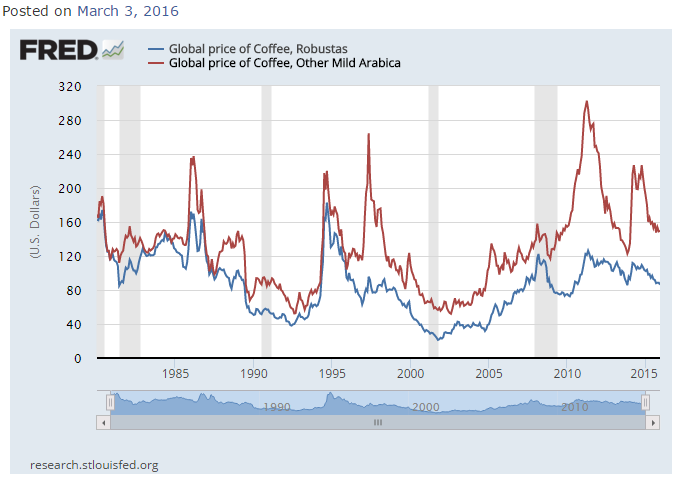 What It All Means

According to Nigam Arora of MarketWatch, “From a technical perspective, lately coffee prices have been moving in a downward sloping channel […] Historically when a commodity is very oversold and moves in a downward-sloping channel, it is more likely to break to the upside than the downside.”

Over the past 10 years, Starbucks is up a whooping 230 percent, and Keurig Green Mountain is up an even more impressive 2,965 percent.

Over the past year, Starbucks is up 26 percent and Keurig Green Mountain is down 28 percent.

If the commodity stays low, Starbucks and coffee-retail peers are likely to continue enjoying robust numbers; if, however, coffee reverses, Starbucks may be in for some disappointment.

JAB completed its acquisition of Keurig this week, and the stock no longer trades.

Reads For The Weed-Kend: Innovative Business Verticals In The Marijuana Industry

How The Keurig Deal Put Coffee Stocks On The Front Burner