For more than 70 years now, Baker Hughes Incorporated (NYSE: BHI) has been publishing rotary rig counts for the United States and Canada every week. On top of this, the company has also issued a monthly international rig count for the last 40 years.

The oilfield services supplier assured the rig counts are “an important business barometer for the drilling industry and its suppliers. When drilling rigs are active they consume products and services produced by the oil service industry. The active rig count acts as a leading indicator of demand for products used in drilling, completing, producing and processing hydrocarbons.”

On Friday, the company released its latest rig count. As of February 5, the United States had 571 active oil and gas rigs, down from 619 last Friday. This figure implies a substantial decline from the 1,456 rigs registered a year ago, and marks the seventh consecutive week with a declining count.

On the other hand, Canada saw an increase in the number of active rigs, from 231 last week to 242 this week. A year ago, the count ascended to 381.

A more detailed look at Baker Hughes’ report reveals that the fall in U.S. active rigs was driven by large declines in both oil and gas rigs. Active oil rigs fell from 498 last week to 467 this week. Meanwhile, the gas rigs count plummeted by 14 percent to 104. This marks the lowest level in 29 years – see chart below. 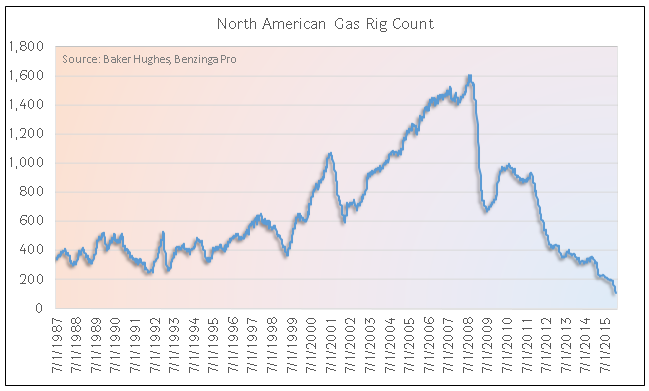 Also noticeably, the percentage of rigs that produce gas over the total number of active rigs is close to a 30-year low as well. 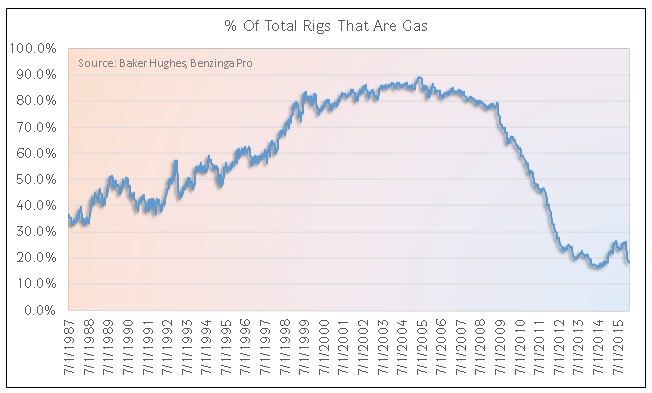 Unlike what was seen in the United States, the count of both oil and gas rigs surged in Canada this week. Active oil rigs rose from 126 to 131, while the active gas rigs escalated from 105 to 111.

Shares of Baker Hughes were more volatile, but almost flat.

Disclosure: Javier Hasse holds no positions in any of the securities mentioned above. 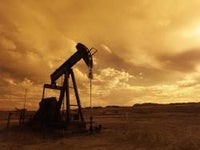 The shares of several oil companies are trading higher Tuesday as oil prices gain amid freezing weather and rolling blackouts in Texas, which has shut refineries and wells in the state and curbed supply. read more 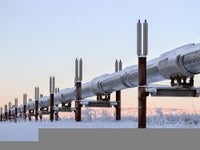 An unexpected surge in crude oil imports in July has pushed up U.S. commercial crude stocks this week. The high import volumes are unlikely to be sustained, according to Capital Economics. read more 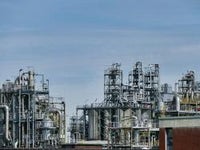 APA Corporation (NASDAQ:APA) today announced it has reached an agreement in principle with Egypt's Ministry of Petroleum and Mineral Resources (MOP) and the Egyptian General Petroleum Corporation (EGPC) in support of read more