As 2015 comes to a close, we take a look back at the biggest earnings surprises of the year.

It’s no secret that over the past couple of years Amazon has had a spending problem related to poor investments, such as the Amazon Fire Phone. It was misses such as this that led to four straight quarters of EPS declines from Q2 2014 – Q1 2015. After starting out 2015 on a down note, with first quarter EPS coming in at -$0.12, 11 cents lighter than the Estimize consensus, the company had a surprising recovery in the second and third quarters. Earnings per share exceeded expectations by 27 cents in Q2 and then 21 cents in Q3, all the while posting double-digit revenue improvements as well. 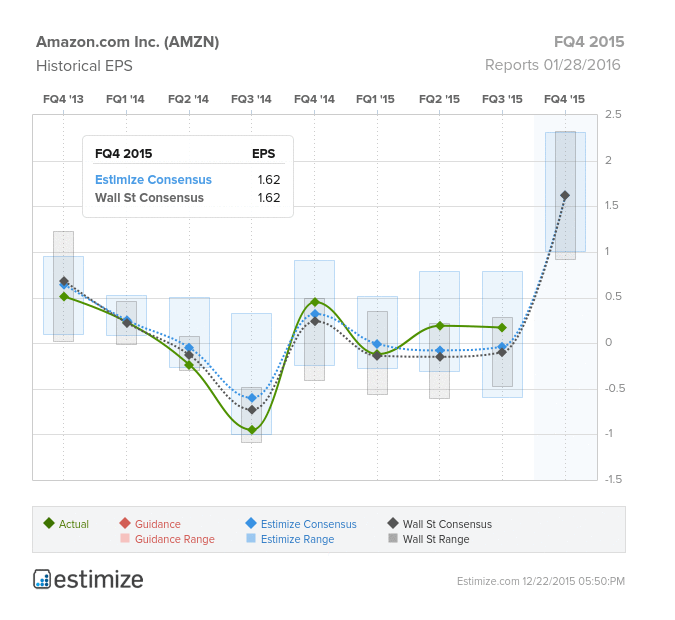 This year seemed to mark an inflection point for Amazon as the unquestionable leader in the ecommerce space, almost solely responsible for the downfall of big box giant, Walmart. On October 14 Walmart blamed its lower 2015 guidance on wage hikes, but anyone paying attention to this story knew the retailer was raising the white flag in its losing Amazon battle. Retailers are doing their best to price match, but can’t keep up with Amazon’s Prime offering. Prime customers are incentivized to use their service to get great deals, free 2-day shipping, streaming videos and even online cloud storage. Amazon’s Prime Day sale held in July topped expectations and drove record revenues during a normally slow period. The company raked in 34.4M orders, an 18% increase from Black Friday 2014, and a 266% increase in worldwide orders. 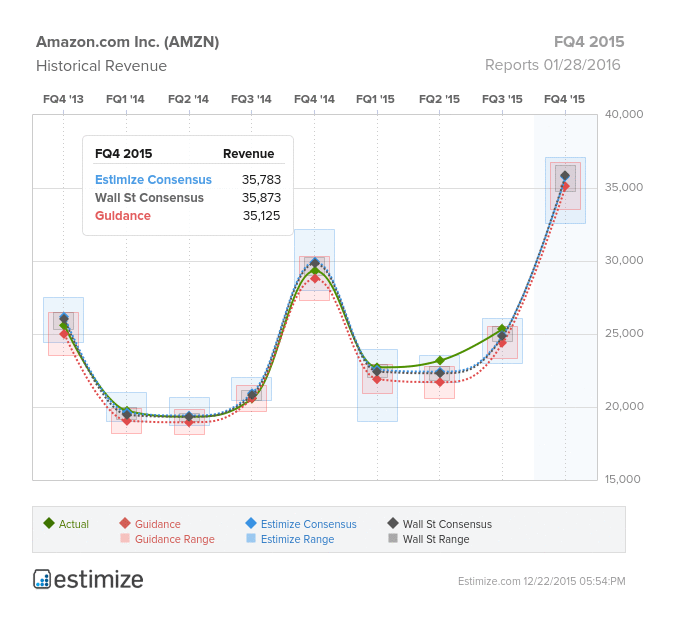 2016: All these factors have helped lift the stock by more than 100% in 2015, and a strong holiday season is expected to carry Amazon into the new year. Analysts currently expect triple-digit profit growth in the first three quarters of 2016, with Q4 dropping to the high double-digits. 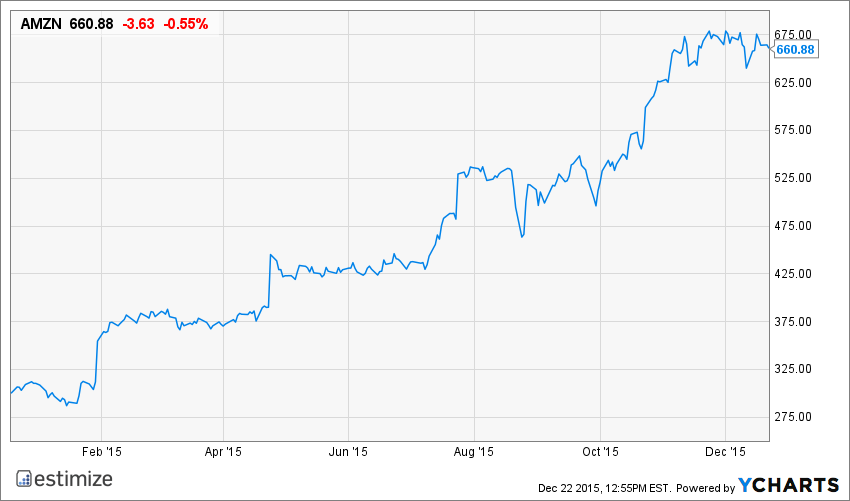 Since IPOing in June 2014, GoPro has been putting up triple-digit earnings growth (even 1300% in Q3 2014!) and high double-digit top-line growth every single quarter. Even as critics wonder whether they will ever be able to evolve into more than just a camera company, GoPro has made serious attempts to enter the worlds of content, virtual reality, and security, all while still producing wildly popular action cameras. 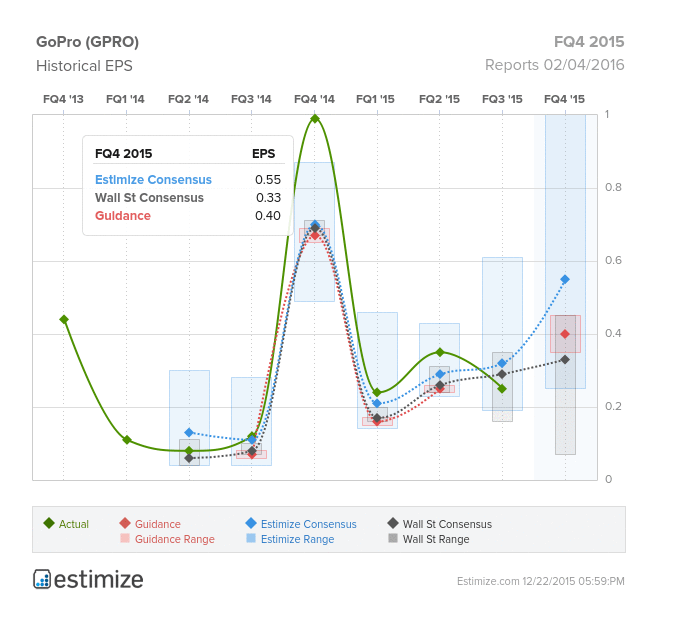 While successful new product launches led to impressive profit and revenue beats in the first half of the year, a third quarter disappointment seemed to come out of nowhere. On October 28, GoPro announced EPS of $0.25, missing the Estimize consensus by 7 cents (yet still growing 108%). Even more concerning were revenues which missed estimates by $43M or 10%. The disappointment led the stock to plummet 15% after the report, with the company blaming inadequate marketing of their Hero4 camera, which remained a headache throughout the year. Since that report, the Estimize consensus for Q4 EPS has fallen to $0.55 from $0.94. Revenues too have dropped significantly to $587M from $735M.  Despite the downward revisions, the company remains confident in its position as it moves through the holiday season. 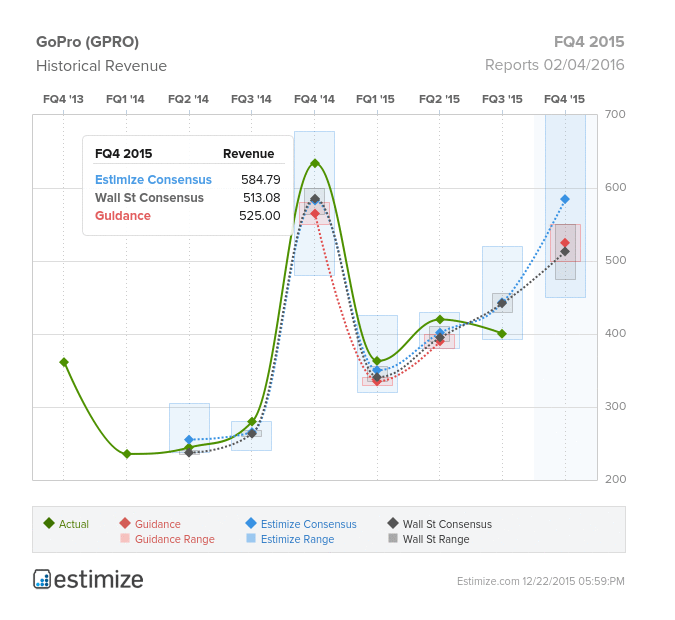 2016: Given the current uncertainty around this name, expectations for 2016 are rather muted, with analysts only expecting flat profit growth for most of the year, with the possibility of a positive breakout in Q4. 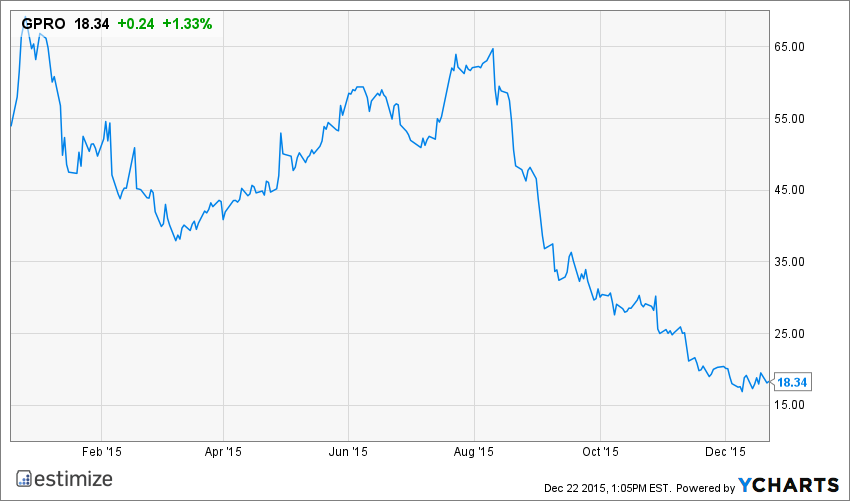 LinkedIn is often inappropriately lumped into the social media category, and while its platform is  social in nature, its business model differs greatly from other companies in the space. Unlike such peers as Facebook and Twitter, LinkedIn gets a much smaller portion of its total revenue from advertising, and instead charges users of premium services a fee. This was the year many had hoped LinkedIn would break out of that social media classification and show how much more sturdy it’s revenue model really is, but the company started the year on a sour note. 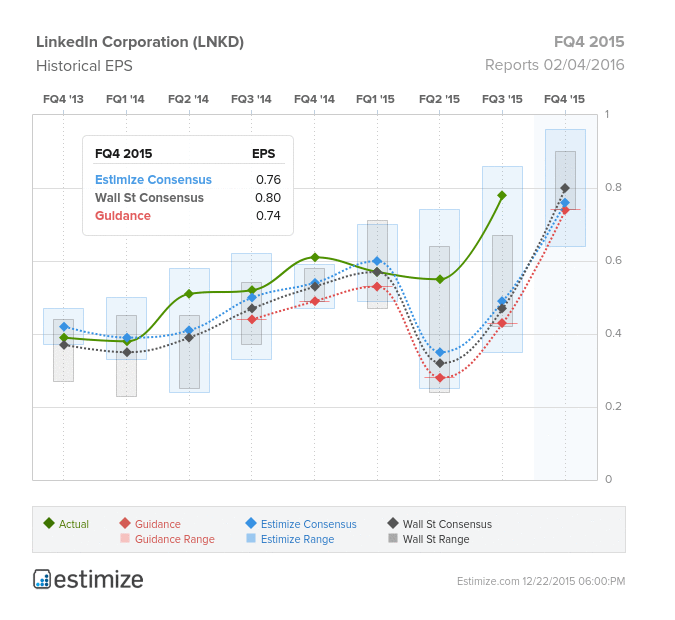 LinkedIn entered Q1 with it’s highest expectations yet, with an Estimize EPS consensus of $0.60, which would have been a YoY increase of 58%. Instead, the company fell short of estimates by 3 cents, its biggest miss since Q4 2013, with revenues missing by $11M. Contrast that with the next two quarters during which the company absolutely blew expectations out of the water. In Q2 LinkedIn recorded a beat of 20 cents and in Q3 that grew to 29 cents. 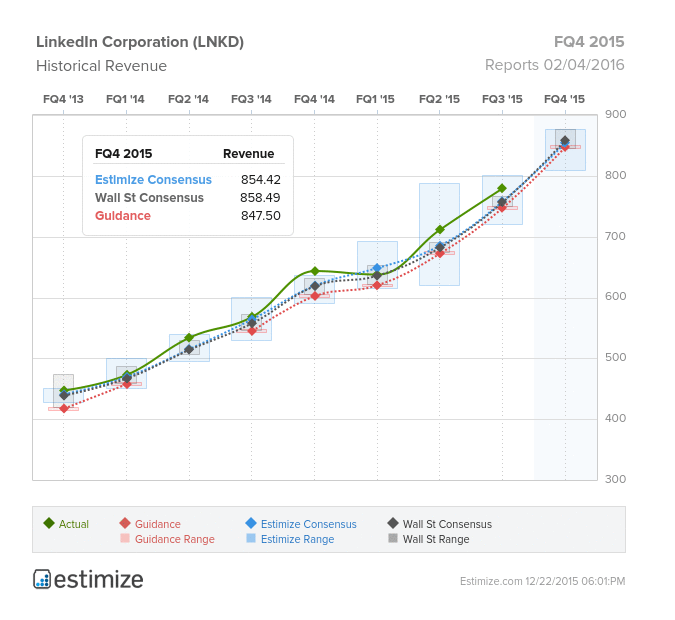 LinkedIn attributes its recent strength to success in its Talent Solutions, Market Solutions, and subscription revenue. Most users are domestic, which means there is still huge untapped growth potential internationally. Since the Q3 report, estimates for the fourth quarter have crept up 10 cents, and while revenues are a little more muted, they have increased by $5M. The company still has more to prove to investors, with the stock about flat for the year. 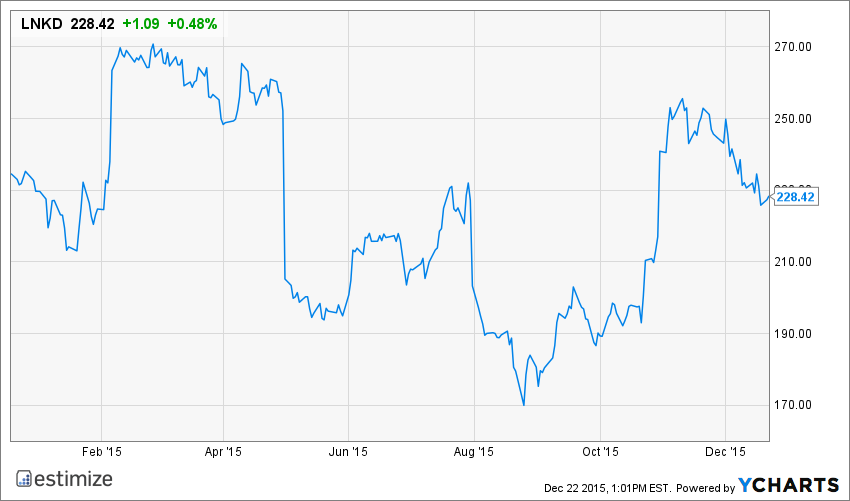 2016: Current 2016 expectations suggest that LinkedIn will continue the momentum it has seen in the second half of 2015, further breaking out of the social media mold.

What a year for Chipotle. An impressive run from 2014 trickled into the first quarter of 2015 as Chipotle’s cult status hit a fever pitch. However, the fast casual restaurant’s first big hiccup came early in the year. On January 13, Chipotle suspended sales of its carnitas after discovering a main pork supplier did not adhere to its animal-welfare standards. The lack of carnitas meant more beef sales which came at a higher cost that even an increase in menu prices couldn’t offset. While the restaurant chain received support from loyal customers that appreciated the company’s strict standards, traffic and sales began to suffer as a result in the second and third quarters. As of their latest report in October, carnitas were only restored to about 90% of restaurants. 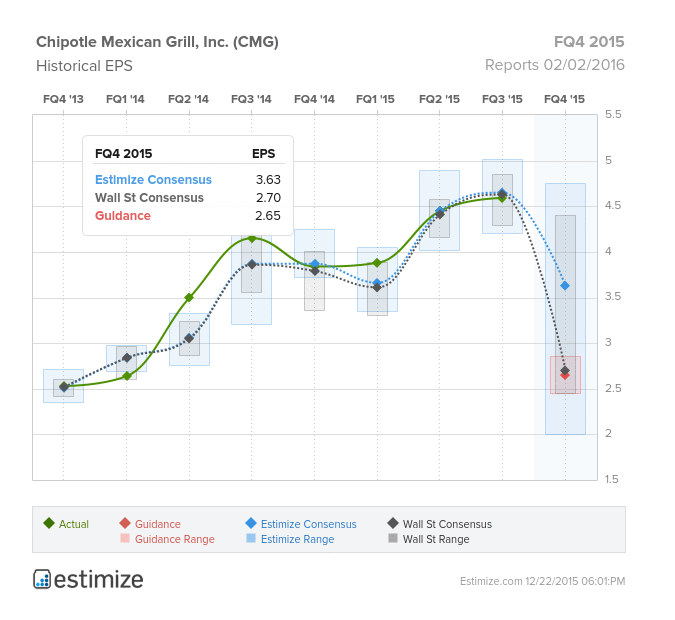 Next up, an increase in minimum wages in San Francisco which affected 84 Chipotle restaurants in the Bay area made a 7% to 10% hike in menu prices necessary for those locations. 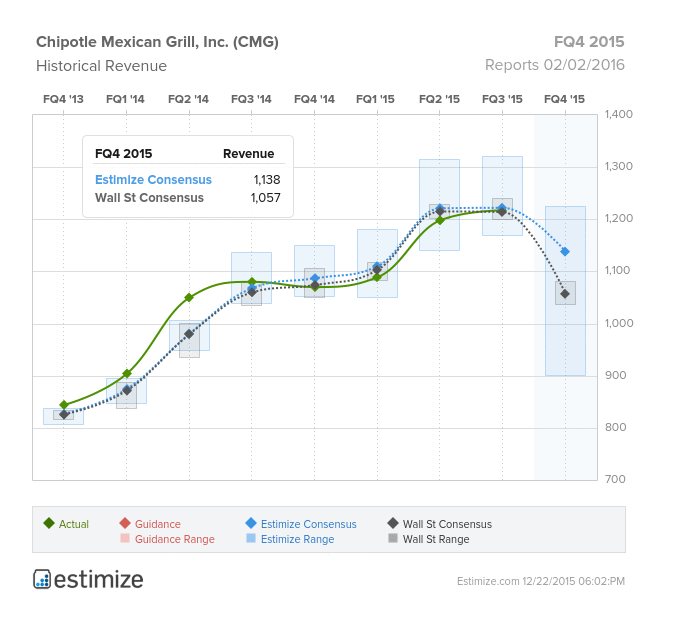 But recent E.coli and norovirus outbreaks might be the worst hit yet for Chipotle. In October it was discovered that an E.coli outbreak had affected around 155k products sold at Costco, Starbucks, Chipotle and others, and sickened over 50 Chipotle customers in 9 states. Weeks later a norovirus outbreak in Boston was responsible for affecting 130 people, mainly college students. The company has a stringent plan in place to avoid any future outbreaks, one that CEO Steve Ells said was “so above industry norms that we are going to be the safest place to eat.” But even since those comments were made, more E.coli outbreaks have been uncovered. 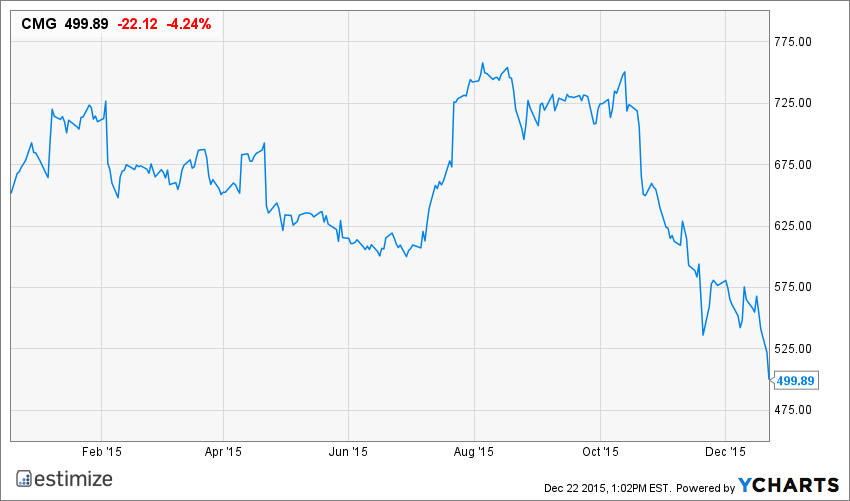 2016: Investors are hoping for a turnaround after seeing the stock tumble 33% since the outbreaks were revealed. It’s clear from the 2016 revisions activity around this name that analysts believe reverberations from this latest health issue will be felt throughout the year. Thus far, Q1 EPS expectations have been pulled down by 24% and Q2 estimates have fallen 13%.

Keep checking back at estimize.com to see what 2016 holds for these and other volatile companies!