The new week is starting right where the old one left off: Cloudy, with a chance of more rate concerns.

Before talking rates, let’s talk Boeing Co BA, which suffered another blow this weekend on news that some of its 777 jets will be grounded after that engine explosion a few days ago. BA is a Dow Jones Industrial Average ($DJI) component, so it wouldn’t be surprising to see the $DJI continue to be pressured maybe more than the other major indices.

The 10-year yield jumped again Monday, recently trading above 1.37%. Back at the start of January, it was around 0.9%. This fast rise could weigh on growth stocks, for reasons we’ll discuss below. It also appears to be weighing down the overall market, with major indices off pretty sharply ahead of the open.

The S&P 500 Index (SPX) isn’t that far from all-time highs, but got a small haircut last week as yields rose and inflation fears flickered. Those inflation concerns aren’t necessarily that relevant in the short term, but this could turn really quickly.

We saw some pretty decent-sized swings last week in rates. While you don’t want to get too carried away—it’s not like the 10-year is creeping above 2%—the velocity of the yield rally has been pretty amazing, and it may be convincing some people to take a breather in stocks.

Historically, a 1.37% 10-year yield is still in the basement. For instance, it was above 5% as recently as 2007 and above 3% in late 2018. Still, this year’s rapid rise might ultimately sap the ability of high-flying growth stocks to continue piling up great earnings results if the cost of borrowing starts to rise. This helps explain why the so-called “mega-caps” like the FAANGs—along with Microsoft Corporation MSFT, and Tesla Inc TSLA—have seen their shares kind of march in place or even turn lower over the last week or two.

One thing fueling the yield rebound is this week’s main event in Washington, where the House of Representatives is expected to debate and then possibly vote on a $1.9 trillion fiscal stimulus. We’ve rallied and rallied and rallied on anticipation of another round of fiscal aid, but as we get closer, people are starting to question what percentage of gross domestic product (GDP) we’re willing to go into debt for. That’s starting to weigh, as is talk of inflation.

Retail sales for January rose 5%, apparently getting some zip from last December’s stimulus, and this next fiscal package is probably going to be much larger. That, along with rising fuel prices due partly to last week’s storms, plays into the inflation fear.

So does the Fed’s continued dovish stance, though one media outlet last week raised the possibility of a “taper tantrum” if the Fed starts hinting at any kind of slowdown in its heavy bond-buying. Stocks could be vulnerable, with indices trading at historically-high levels above their 200-day moving averages. The SPX enters this week on a four-day losing streak.

And speaking of the Fed, the other lever they control—the Fed funds rate—has been sitting at the 0–0.25% target range since the early days of the pandemic, with little sign that it’s headed anywhere anytime soon. But the futures market is starting to show signs of life. As of this morning, CME Group’s FedWatch tool is pricing in an 8% chance of a rate hike by June. While that’s not a material likelihood, it’s what we often see as rate sentiment begins to change. A few weeks ago, the futures markets were pricing in a zero-percent likelihood of any rate moves in 2021.

Earnings Season: It Ain’t Over Til ...

Earnings season is basically finished but for the shouting, as the saying goes. However, we still have some key company results to wade through this week. The list may be shorter, but a few key reports could shed light on some important sectors.

For instance, NVIDIA Corporation NVDA is expected after the close Wednesday and could provide insight into the closely watched semiconductor industry. NVDA appears to be off to a solid start in 2021 with plenty of strength in its gaming and data center business—two segments that make up 88% of its total revenue. And with a major acquisition possibly in the works, a slew of product launches, and a surprise surge in NVDA’s data center growth, analysts generally have a bullish tone heading into earnings.

Then we have Home Depot Inc HD and Lowe’s Companies Inc LOW on tap Tuesday and Wednesday, respectively. If 2020 was the year it felt like everyone was moving to larger homes for more space where they could hunker down with their families, then 2021 might be the year when those same home buyers look around at the four surrounding walls and start thinking about what they don’t like and how to change it. If that’s the case, HD and LOW are perfectly positioned thanks to all they’ve been doing.

Other high profile reports expected this week include Macy’s Inc M, Foot Locker, Inc. FL, Moderna Inc MRNA, Toll Brothers Inc TOL, and Stericycle Inc SRCL. We’ll talk more about some of these and what to watch as the week continues.

Turning away from earnings, there’s plenty of data on tap this week, too. Today, investors got the latest leading indicators report from the Conference Board. Tomorrow brings consumer confidence data, and new home sale numbers are on tap for Wednesday.

Bitcoin continues to climb, hitting new highs above $52,000. At the end of the day, rates are still historically low and there’s a lot of money floating around looking for a home. 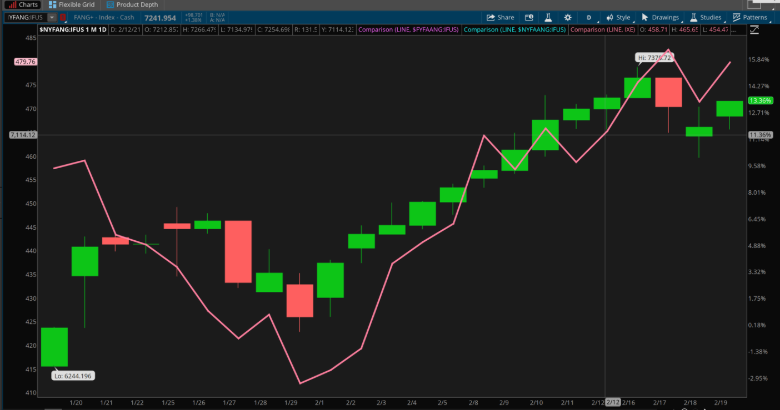 CHART OF THE DAY: OLD ECONOMY OUTPOWERS NEW. The so-called “FAANG” stocks ($NYFANG:IFUS—candlestick) had been out ahead of the surging Energy sector (IXE—purple line) most of this year until last week. That’s when the icy weather in Texas gave Energy another boost while inflation fears clipped Tech.  Data sources: NYSE, S&P Dow Jones Indices. Chart source: The thinkorswim® platform. For illustrative purposes only. Past performance does not guarantee future results.

Participation Trophies not Handed Out: With earnings season more than 80% done, 79% of S&P 500 companies have reported actual EPS above estimates, which is above the five-year average of 74%, according to research firm FactSet. So far, companies are reporting earnings growth of 3.2%, compared to an estimated year-over-year decline in earnings of -9.3% back on Dec. 31.

However (and there’s always a “however,” isn’t there?), the companies delivering positive earnings surprises aren’t getting rewarded by investors this earnings season. Instead, companies who’ve surprised to the upside have seen a decline in price of -0.1% on average two days before the earnings release through two days after the earnings release, FactSet said. If that trend lasts through the rest of earnings season, it will be the first time in a year and only the fourth time in the last five years where that’s happened.

What’s going on here? Not a lack of positive guidance. To date, 63% (53 of 84) of the companies that have issued EPS guidance for Q1 have delivered positive outlooks, according to FactSet. Hard to give a fish-eye to that, so maybe it’s just that many investors feel earnings are finally catching up a little with prices, and don’t feel like handing out more medals until Q1 earnings start rolling in and people see more proof.

A Day in the Sun: Earnings season is rapidly coming to a close, but that doesn’t mean we won’t see corporate news flashes. That’s because with earnings winding down, the “investor day” season is ramping up. Some of the companies with investor days scheduled in the next few weeks include Exxon Mobil Corporation XOM, Chevron Corporation CVX, Mattel Inc MAT, Hasbro, Inc. HAS, and Twitter Inc TWTR. While a typical earnings day includes a lot of color around the previous quarter, investor days can often move stocks when companies discuss the future. For instance, earlier this month, PayPal Holdings Inc PYPL shares surged after analysts attending investor day apparently liked what they heard about future trends from PYPL executives. Some analysts raised their target prices after the meeting.

Investor days also tend to draw lots of attention from the media, which could be good or bad, depending on how the news gets framed. So when you’re thinking about possible market moves affecting any companies you own, don’t forget to check the calendar and see if any of them have events scheduled. Listen in, too, if you have time (investor days tend to be all-day events), and maybe you can glean some interesting nuggets.

You May Now Move About the Cabin: A week ago, cooped up people around the country flocked to airports despite government warnings against travel, hoping to take advantage of a long weekend to go somewhere warm. In Florida, for instance, anecdotal evidence suggests that tourism is ticking up, with long lines at restaurants, heavy traffic around various beaches, and crowded airports. The President’s Day weekend of Feb. 12-15 saw passenger air traffic totals reach the highest levels since the Christmas and New Year’s holidays, with over one million people passing through Transportation Safety Administration (TSA) checkpoints on Feb. 11 and 12, and just under one million on Feb. 15. Those totals were still just half of year-ago levels, and travel quickly fell after the holiday. By the middle of last week, TSA traffic reached only about one-third of year-ago levels, but then jumped back above one million on a couple of days this last weekend, though it remained less than half of 2020.

Analysts say tourist travel is likely to be the first type of travel to make a comeback once people get more comfortable traveling. Business traffic, meanwhile, is more of a wild card. That means airlines like Southwest Airlines Co LUV, which cater more to sun-seekers and skiers in the winter, might do better than airlines like Delta Air Lines, Inc. DAL that try to lure business travelers. Both LUV and DAL shares, however, are up about the same 9% over the last month.

Photo by Markus Winkler on Unsplash