Salarius Pharmaceuticals Inc. SLRX shares are trading higher on above average today amid a statement released by the company that it will expand its phase 1/2 clinical trial of Seclidemstat in patients with Ewing Sarcoma and Ewing-Related Sarcomas. Per the company’s website “the lead compound Seclidemstat represents a potential paradigm shift in the treatment of cancer initially targeting Ewing sarcoma, a devastating pediatric, adolescent and young adult bone cancer where no targeted therapies are currently available.”

The five minute chart shows that the stock is forming a pennant on higher volume. Volume as high as we saw in the stock this morning often suggests that the stock will move strongly one direction or the other. The float on Salarius is 16.28 million and average volume is 2.5 million. 15 minutes after market open the stock had already traded over eight million in volume. This early volume suggests that the stock could trade three to five times its float. When this happens, stocks are often volatile.

Another key technical level market technicians are watching is the premarket high of $3.38.

The daily chart shows a large run in early February, from $1.40 to $3.50, before the stock cooled off for the following week and a half. In the preceding two days to today, there was a large gap lower, followed by a large gap up, this is often thought to be a bullish candle pattern technicians refer to as the “abandoned baby pattern.” 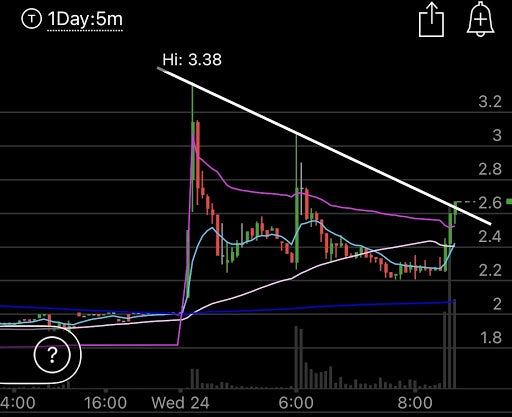 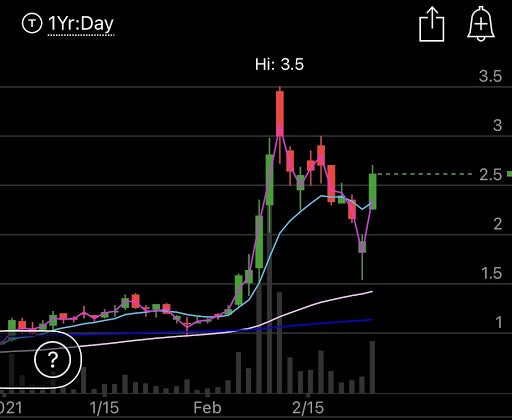