Once Facebook spearheaded the social media movement at the beginning of the century, companies like Snapchat (SNAP) quickly sprouted up to fill the value voids left by the behemoth.

Snap is an American camera and social media company founded in 2011 by Evan Spiegel and Bobby Murphy. Snap is based in Santa Monica, California and has three products that drive revenue: Snapchat, Spectacles and Bitmoji.

The social media company made its debut on the New York Stock Exchange in March 2017. Since its initial public offering at $17, the company’s market capitalization has risen to $90B, or around $60 per share.

Snapchat at a glance

Although most people forget the company’s original name “Picaboo,” Snapchat created a user experience through “Snaps,” which consist of either photos or short videos. Unique to Snapchat, the videos, photos, and messages disappear after being viewed. The company provided value to users who wanted a way to have more casual and simplified interactions than applications like Facebook, Instagram, or various messenger apps.

Snapchat has gone through some interesting changes and events over the years:

If you had invested at the IPO price of $17, your investment would have quickly shot up as high as $29.44.

Since its initial public offering at $17, the company’s market capitalization has risen to $90B, or around $60 per share. 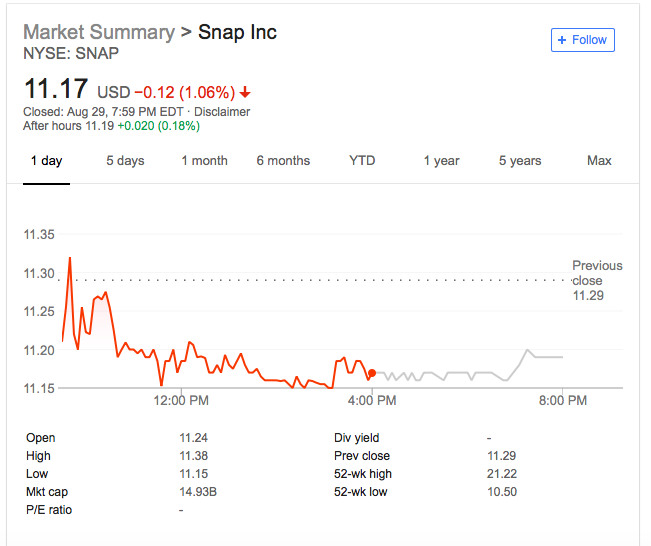 How to purchase SNAP

Most major brokerage firms that trade securities will provide you with the ability to purchase Snapchat’s stock. Some basic ideas on how to acquire the stock:

As is often the case with newly listed companies, Snapchat still remains a risky investment in the eyes of most analysts. The company currently grows at an exceptional rate, but has yet to temper its costs with growth.

Snapchat’s price reflects what investors expect of the company. In order to justify the current share price, many individuals expect Snapchat to turn a profit at some point.

What you have to decide for yourself is if that’s true and when its value increase will be realized.