Jenny Ta On How Dogecoin Could Reach $1-Trillion Market Cap 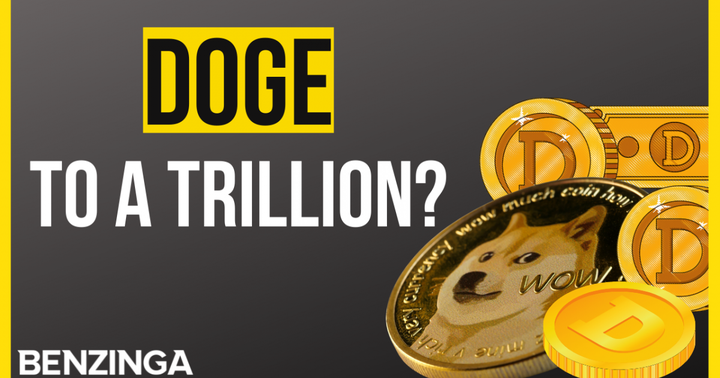 Jenny Ta, the founder and CEO of CoinLinked.com, shared her thoughts about the future price of Dogecoin (CRYPTO: DOGE) Friday on Benzinga's YouTube show "Power Hour."

The popularity of Dogecoin has soared recently, as the cryptocurrency that started as a joke is no longer just chasing its tail. The meme-based cryptocurrency received public support from numerous celebrities in 2021 and is picking up traction as a method of payment at retailers.

Related Link: Much Wow Gamestonk! How You Can Use Dogecoin At GameStop, Other Retailers

The price of the popular cryptocurrency traded from about 1 cent on Jan. 1 to almost 75 cents on May 8 when Tesla Inc (NASDAQ:TSLA) CEO Elon Musk hosted "Saturday Night Live."

From a percentage perspective, the run of Dogecoin over that time was a tough uphill battle, Ta told Benzinga, adding that it should be much easier for the cryptocurrency to move from 75 cents to $1.

$1 per Dogecoin is imminent, she said, adding that she believes Dogecoin will eventually reach a market cap of $1 trillion, valuing the cryptocurrency around $7 or $8 per coin.

Ta noted that she is thankful for "the cryptocurrency godfather" Bitcoin (CRYPTO: BTC), as she said that without Bitcoin, Dogecoin would have never come along.

At last check Friday, Dogecoin was trading down 11.87% over a 24-hour period at a market cap of around $46 billion.

‘Shark Tank’ star and renowned investor Kevin O’Leary has likened investing in Dogecoin (CRYPTO: DOGE) to gambling and said the meme cryptocurrency may be considered just an “entertainment” as it has no inherent value. read more

How Elon Musk Reacted To Suggestion That AMC Should Accept Dogecoin

Dogecoin (CRYPTO: DOGE) co-founder Billy Markus shared what he called the “ultimate shitcoin” on Twitter on Wednesday. What Happened: Markus posted a link from Gizmodo that featured a proprietary cryptocurrency called “Ggool”, which means “honey” in Korea from where it originated. read more

A Louisville coffee shop is rebranding as Dogebean, a play on Dogecoin (CRYPTO: DOGE), and will accept payments in the meme cryptocurrency, according to a report by WLKY Channel 32. read more