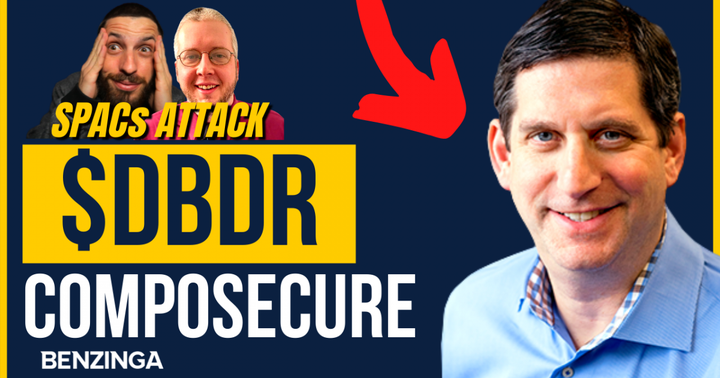 CompoSecure is a provider of financial payment cards, as well as cryptocurrency storage and security solutions. Jon Wilk, CEO of CompoSecure, appeared on Benzinga's YouTube show "SPACs Attack" for an exclusive interview Tuesday.

About CompoSecure: CompoSecure has been around for 20 years, Wilk told Benzinga.

The company partners with financial institutions and fintech companies across the globe, he said, adding that CompoSecure helps its partner businesses drive spending and acquire new customers.

CompoSecure's Metal Card Product: CompoSecure will deliver over 22 million metal cards to the market this year, which will drive over $280 million in revenue for the company, Wilk said.

The company has notable clients such as JPMorgan, American Express and Capital One, the CEO said.

There are 13 billion payment cards in circulation and 4 to 5 billion are issued every year, Wilk said. The company has only captured about 0.5% of its total addressable market, he said, adding that the company is in the early innings of its growth story.

CompoSecure's Crypto Storage Solution: The company has leveraged its 20-year history in payments and security to build a three-factor authentication product called Arculus, the CEO said.

When customers purchase crypto, they typically hold the cryptocurrency in a hot wallet, he said. CompoSecure offers a cold storage solution that gives the customer control of their private keys, Wilk said.

More than 70 million customers are using hot wallets to store crypto, he said, adding that the market is projected to grow to 230 million.

The ease-of-use of the Arculus product will allow the company to target the entire market of individuals using hot wallets to store crypto, Wilk said.

Wilk On Gaming, Gambling: The company plans to get into the gaming segment, Wilk said.

Gaming companies struggle with fraud within their in-game transactions and also want to add crypto capabilities to their platforms, he said.

CompoSecure offers the ability to lock down the payment ecosystems and add cryptocurrency to payment systems, according to the company's CEO.

In addition, the CompoSecure CEO told Benzinga the company is exploring the opportunity to introduce its three-factor authentication system to the online gambling industry.

The ability to tell the company's forward-looking story through the SPAC transaction, as opposed to the traditional IPO route, was important, he said.

The two companies announced a definitive merger agreement on April 19. The deal is set to close in the third quarter. Upon closing, the combined company will be listed on the Nasdaq as CompoSecure, Inc. The ticker symbol for the combined company has yet to be disclosed.