Could Hasbro Stock Get A Boost From NFTs, Wizards of the Coast Growth?

A leading toy company with over 1,500 brands is exploring ways to launch non-fungible tokens as a possible way to monetize content.

What Happened: Hasbro, Inc. (NASDAQ:HAS) reported first-quarter earnings this week. Along with highlighting the growth of its consumer brands and digital content, the company confirmed it is exploring NFT options.

“NFTs are a real opportunity for us,” Hasbro CEO Brian Goldner said. “We have so many brands that really operate on multiple demographic levels; whether it’s Transformers, whether it’s Magic and the D&D brand, and brands like G.I. Joe.”

Magic: The Gathering could be tokenized as digital cards and traded digitally and used in online matches, Crypto Briefing said.

“We have our arms around this and see multiple opportunities on the NFT side. We are actively developing our opportunities here and we do see it as substantial,” Goldner said.

Related Link: Is Funko The next Big NFT Winner?

Why It’s Important: Sales and interest in NFTs have been hot in 2021 with many companies exploring ways to capitalize on the trend.

Hasbro recently changed the way it recognizes revenue and operating profit by business segment. In the first quarter, the company reported its Wizards of the Coast and digital gaming segment had revenue of $242.2 million, up 15% year-over-year.

The growth for the digital gaming segment was ahead of the 14% growth for consumer products and also came in ahead of the entertainment segment that saw a year-over-year decline of 32%.

Magic: The Gathering Arena, a mobile version of the popular card game, had a strong quarter with revenue up 24% year-over-year and reportedly exceeding company expectations. The average weekly playing time on the app was around nine hours.

Physical cards in the Magic series also performed well in the quarter with the Kaldheim deck released in February, resulting in it being the best-selling winter set ever for the company.

Benzinga’s Take: While Hasbro is known as a toy company, its Wizards of the Coast and digital gaming segment could be undervalued with strong margins and the largest percentage of profits for the company. Growth for the Magic series and the entry of NFTs by Hasbro could create upside for the stock. 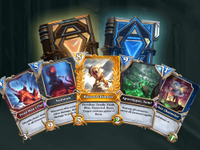 The Week Ahead: Earnings, FDA Actions, And Industry Conferences To Watch