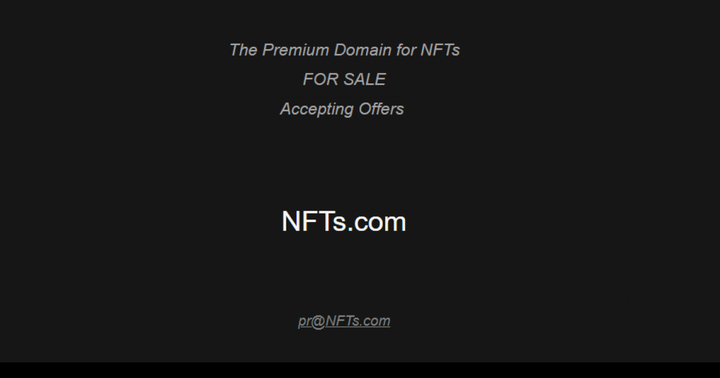 The owners of the website NFTS.com are offering to sell the domain — apparently for $31 million.

What Happened: The news comes from Alexandre Dreyfus, the founder and CEO of Chiliz blockchain, who said on Twitter that the owners of the website had offered to sell him the domain.

I receive an email from the owners of https://t.co/uowfwbbAHj. They want to sell it for $31M. If you are interested.

The domain still appears to be for sale, a week after Dreyfus' tweet, as the site itself says it is "accepting offers."

Why It Matters: Non-fungible tokens, or NFTs, have gathered steam over the past few weeks, with some digital collectibles and artwork selling for millions of dollars.

A user has offered over $1 million to buy one of Elon Musk’s tweets about an NFT song, and earlier this month, the artist known as Beeple sold an NFT of his digital artwork for a record $69 million.

Despite the fact that Google searches for NFTs have skyrocketed lately, many long-term crypto proponents have remained skeptical of the craze around the new asset class.

Robert Leshner, the founder of decentralized finance (DeFi) protocol Compound Finance, asked his Twitter followers if they were aware that NFTs were a bubble and what their “exit strategy” was.

“I see it more of the same of any asset class with market cycles,” commented one trader, adding that in his opinion, “There will be a bear market for NFTs followed by another NFT crazed bull market afterward.”

A leading sportswear company could be betting big on the growth of NFTs and the Metaverse, with several partnerships announced and hinted at over the last week. read more

Ross Ulbricht, the creator of the now-defunct dark web marketplace Silk Road, has caused a commotion on Twitter by announcing an auction of his series of non fungible tokens (NFT). read more