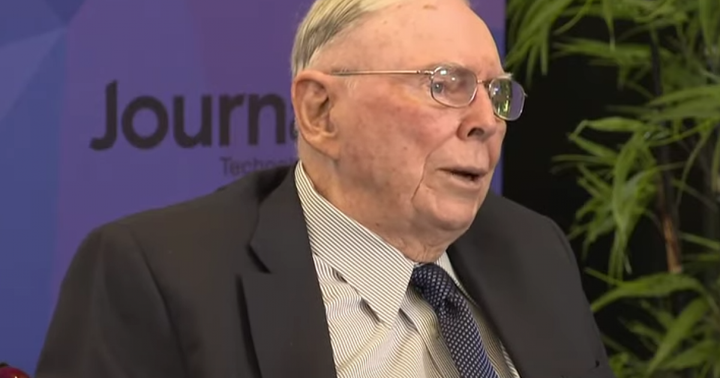 Munger fielded questions from investors on topics such as the psychological challenges of investing during a market frenzy, the explosion of new celebrity SPACs and the possibility of bitcoin being a long-term threat to big U.S. banks.

Ride It Out: Munger said crazy market booms such as the one happening on Wall Street in 2021 are nothing new, and investors just have to stick to their long-term plans.

“I’ve been around for a long time, and my policy has always been to just ride them out,” Munger said.

“A lot of [investors] crowd into buying stocks on frenzy, frequently on credit, because they see that they’re going up. And of course, that’s a very dangerous way to invest.”

Munger was also asked about the recent WallStreetBets-fueled short squeeze in GameStop Corp. (NYSE:GME) and other so-called meme stocks.

“That’s the kind of thing that can happen when you get a whole lot of people who are using liquid stock markets to gamble the way they would in betting on racehorses. And that’s what we have going in the stock market,” Munger said.

“I think you should try and make your money in this world by selling other people things that are good for them. If you’re selling them gambling services where you rake profits off the top like many of these new brokers that specialize in luring the gamblers in, I think it’s a dirty way to make money and I think we’re crazy to allow it.”

Dot-Com Bubble Parallels: Munger said he sees parallels between today’s market and the market during the dot-com bubble in the late 1990s.

“I think it must end badly, but I don’t know when,” Munger said.

He noted that he hasn’t participated at all in the wave of recent SPAC offerings being promoted by celebrities and online influencers.

“I think the world would be better off without them. I think this kind of crazy speculation in enterprises not even found or picked out yet is the sign of an irritating bubble. It’s just that the investment banking profession will sell shit as long as shit can be sold,” he said.

Bitcoin No Threat To Banks: Both the Daily Journal and Berkshire Hathaway have large investment positions in Bank of America Corp (NYSE:BAC) and other large banks, and Munger said he doesn't see Bitcoin (CRYPTO:BTC) and other cryptocurrencies as a long-term threat to U.S. banks.

“The central banks of the world like controlling their own banking system and their own money supplies, so I don’t think Bitcoin is going to end up the medium of exchange for the world,” He said.

Munger, who has previously called Bitcoin a “turd” and said trading cryptocurrencies is “just dementia,” said Bitcoin price is far too volatile to be a mainstream medium of exchange.