Cardano: The Latest 'Too Good To Be True' Crypto?

Today at Invest Diva we are going to look at one of the most promising projects in the New Year: Cardano. I’ll overview the fundamentals, and will also take a look at ADA’s price action versus the USD and BTC respectively.

Cardano is a platform for decentralized applications founded by Charles Hoskinson, who was also involved in the creation of Ethereum. The network is still controlled by a handful of developers, but that’s expected to change as Cardano starts to decentralize next year to become more like IOTA. But unlike Ethereum, Cardano uses a proof-of-stake consensus protocol and a different programming language to solve the big problems in smart contract technology. Also, Cardano is also planning a self-funded governance system, similar to Dash, where users will be able to vote on the next developments for the blockchain ecosystem.

But is that too good to be true? Crypto Briefing’s recently published its first research on Cardano in a Digital Asset Report and Evaluation, or DARE. Although our analysts were very impressed by the Cardano team’s scientific approach to solving blockchain problems, they did find a few things to make you think twice. You can read about that in the DARE report.

Meanwhile, Cardano’s ADA’s price action has been similar to that of many other cryptocurrencies like Bitcoin in the past year. It reached an all-time high in January 2018 and spent the rest of the year in the bear market. One interesting note is when you compare ADA’s price action versus the USD, to its value versus Bitcoin. There’s a slight difference between the two pairs.

Versus the USD, ADA’s value has already reached and surpassed below its previously held lowest price of 10 cents. In September 2018, it broke below this level and reached the all-time-low of three cents in December. With the most recent bullish wave, its price is attempting to recover, but it still has a hard Ichimoku cloud to cross over. 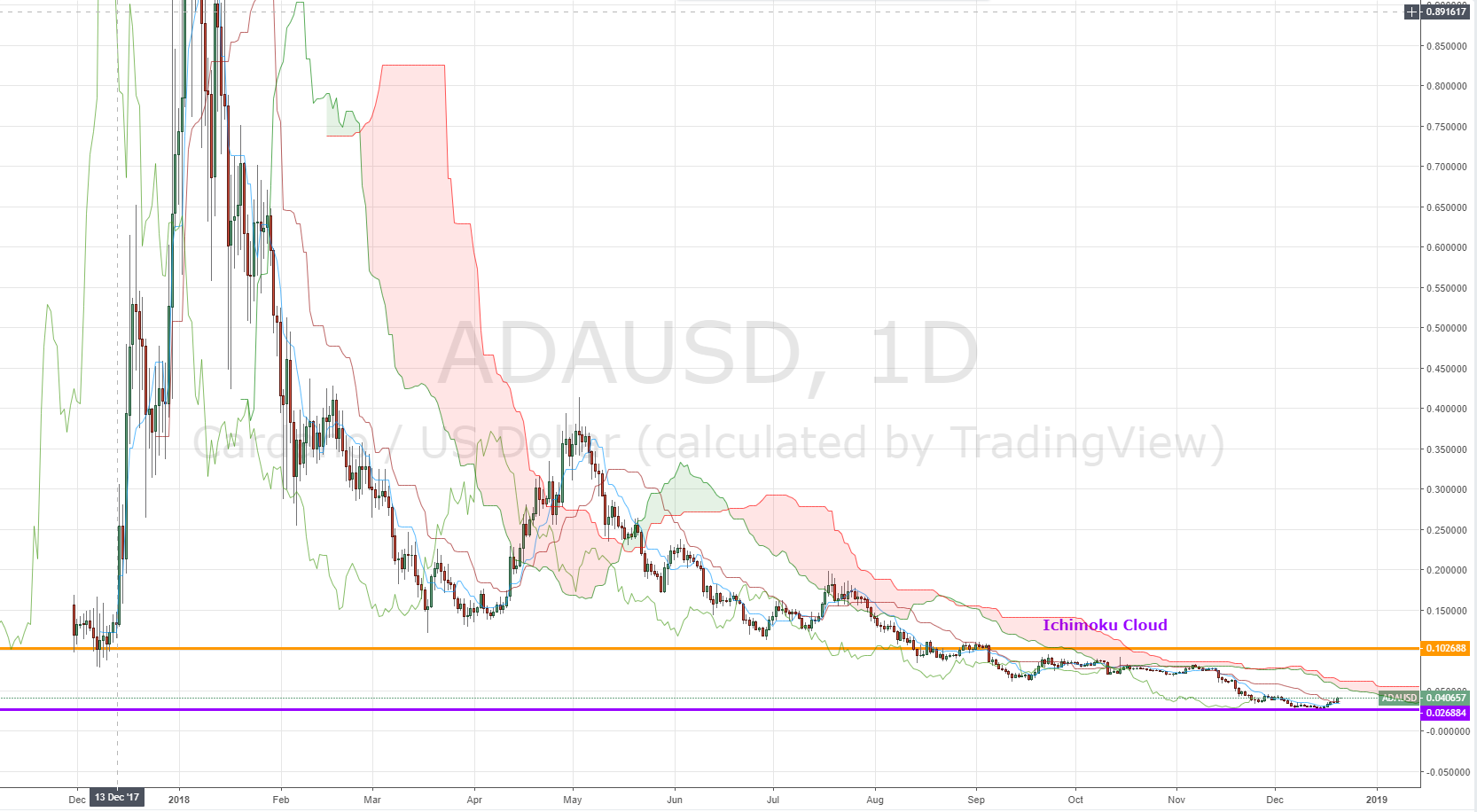 Versus Bitcoin, on the other hand, ADA’s value has yet to reach the all-time lows. Keep in mind that for the ADA/BTC pair to slip lower, Bitcoin needs to get stronger. So this comparison basically means that Bitcoin has dropped more than the US dollar’s median value. Learn about how currency pairs work here. 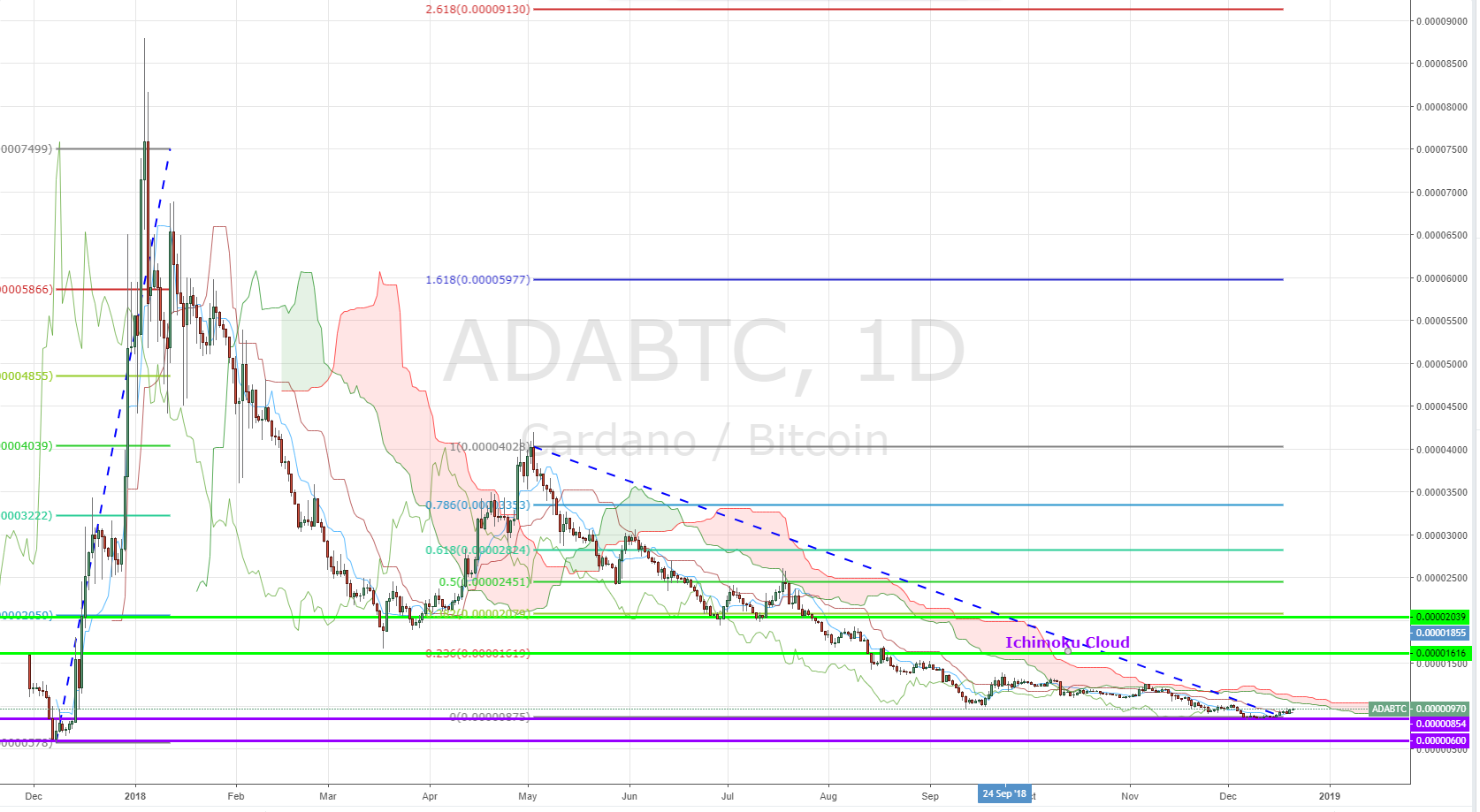 But since Cardano’s value is strongly correlated to Bitcoin, at least for now, any significant shifts in its sentiment depends on the general market direction.

A Look At Holiday Cheer In Cypto: How Long Will It Last?

The Great Financial Reset: American Capitalism Is In Crisis Again. Crypto Can Save It... If America Is Smart Enough To Embrace It

If You Invested $1,000 In Bitcoin, Ethereum, Dogecoin And Other Cryptos 5 Years Ago, Here's How Much You'd Have Now

It’s been a great time to invest over the past five years. Virtually anything investors have touched has turned to gold since 2016, and the SPDR S&P 500 ETF (NYSE: SPY) total return over that stretch has been 120.1%. read more