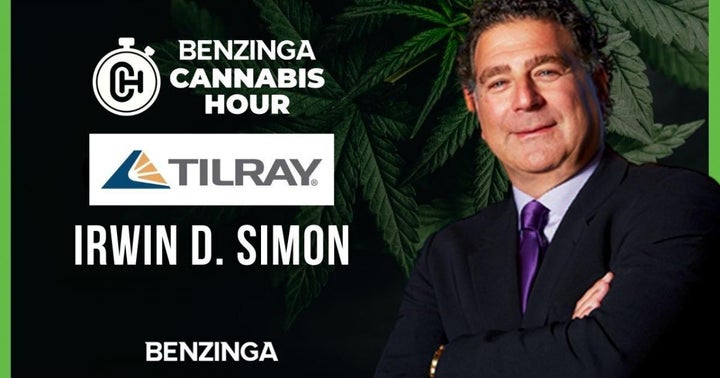 Tilray Inc (NASDAQ:TLRY) CEO Irwin Simon spoke with Javier Hasse and Patrick Lane on Wednesday’s "Cannabis Hour" following the release of the company’s May quarter earnings report, after which Tilray’s shares were up roughly 25%.

Simon began the interview by noting that 2020 was a year to remember for various reasons, including COVID and his own company’s rise to the top of the cannabis food chain.

How and why has Tilray’s growth been so outstanding?

It’s not the first time Simon has said this but it bears repeating: cannabis is here to stay.

“The demand for cannabis and the companies who build brands continue to grow, ” Simon said.

Asked about the company’s internal and very ambitious plan that involves the no small goal of becoming a $4 billion company in the coming two years, Simon laid out his plans and how Tilray intends to carry them out.

The first on the list was basic: get bigger, which would entail acquisitions. Which U.S. MSOs might Tilray might be looking to acquire? No details on that score but he said which states they’ll be looking at: the biggest ones – California, New York and Florida for starters, Simon told Hasse and Elliot.

2. Products and more products: Tilray is already on the beer and beverage train but Simon likes the idea of consumption goods, mostly in the edibles, drinks and snack area.

3. Geographical growth: Simon mentioned gaining sales in U.S. states and Canada. Then there’s Europe where Tilray already dominates the largest market, Germany, and is looking at Portugal and Poland with Israel being an important market as well. In terms of distribution in Europe, Tilray already has CC Pharma in place and sees legal adult-use markets growing across Europe in the near future.

In terms of growth, “Our edge is our experience” Simon added.

While all of the above is happening, Tilray will “ensure low-cost production and good value for consumers,” Simon noted.

While Simon is clearly optimistic that legalization in the U.S. is in the cards, and soon, he called his $4 billion goal “aspirational.”

“My aspirations are built on legalization in the United States.”

Asked what it felt like to be on top, Simon’s confidence was mixed with a dose of caution.

“Nimble, flexible, entrepreneurial…but you have to be aware of who will soon be nibbling at your heels.”

Tilray Stockholders Approve Increase In Number Of Shares To Help Drive $4B In Revenue, Stock Trades Down

Shares of cannabis giant Tilray Inc. (NASDAQ: TLRY) (TSX: TLRY) are trading down on Friday afternoon, after the company reported that its stockholders have approved an increase in the number of authorized shares of its common stock. read more

This Cannabis Company Has A Better 1-Year Return Than Tesla, Facebook, GE And Ford

Investors that added Tilray Inc (NASDAQ: TLRY) to their portfolio one year ago are truly living the high life. read more