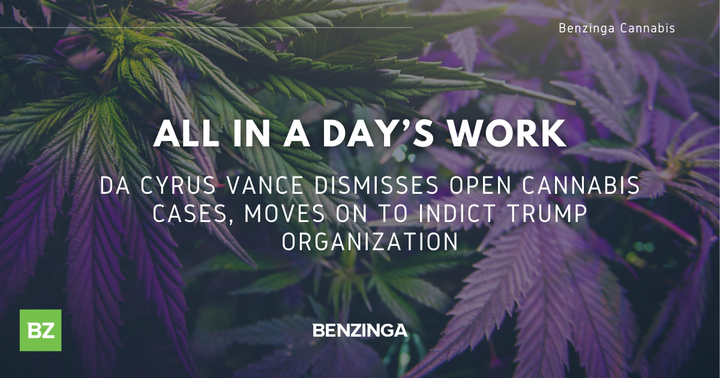 Not A Moment Too Soon

New York City, which is poised to become one of the largest cannabis markets in the country, actually the world, had also been known for its sky-high arrest rates for simple weed possession, impacting Black and brown New Yorkers the most. NYPD’s own 2020 data showed that 94% of all weed-related arrests impacted people of color throughout the city’s five boroughs.

"It would not be logical to keep these open cases on the books, make them go through the judicial process only to expunge them under the MRTA.

“But the most important consideration is that getting rid of these open cases prevents unnecessary future harm to those who have been previously arrested,” Holland told Benzinga. “Also, it will save the taxpayers the large amounts of money it would cost to try the cases.”

All In A Day’s Work

After dealing with the Big Apple’s cannabis issues, DA Vance and his team packed up their briefcases and moved on to their next task at hand: indicting a former president.
Actually, the former president was not indicted but the charges still threaten him, writes the New York Times.

Vance has said that “the work continues” and Trump will remain the focus of the investigation as prosecutors pressure the Trump Organization’s longtime CFO, Allen Weisselberg, who was indicted on 15-counts, including scheming to defraud, tax fraud, falsifying records and running a 15-year scheme to help its executives evade taxes.

It makes you wonder what Cyrus Vance will do next.