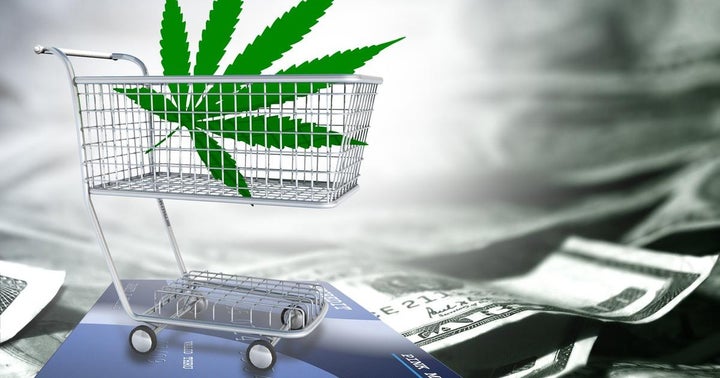 This article by Hugo Gray was originally published on The Green Fund, and appears here with permission.

Conversely, the Australian Cannabis Index underperformed again last week, as investors turned their attention towards the US cannabis market.

The US cannabis market reacted in jubilation last week, after the Secure and Fair Enforcement (SAFE) Banking Act—which would make it legal for insurers and banks to work with the cannabis industry—was successfully passed by the House of Representatives.

Meanwhile, the recent influx of states electing to legalize cannabis prompted analysts at the investment firm Cowen Inc to revise their annual market forecast for the US recreational market to $41 billion by 2025.

Montana businesses shouldn't have to operate in all cash—they should have a safe way to conduct business. My bipartisan bill will provide needed certainty for legal Montana cannabis businesses and give them the ability to freely use banks, credit unions and other financial institutions without the fear of punishment. This in turn will help increase public safety, reduce crime, support Montana small businesses, create jobs and boost local economies. A win-win for all.US Senator, Steve Daines

In an interview with The Street, Cowen Senior Analyst Vivien Azer stated that the company had also identified Green Thumb Industries (CSE:GTII) as its "top pick" for the North American sector.

"They are one of [only] ten cannabis license holders in New York, which is poised to be a multi-billion dollar market. We think that Green Thumb has a really nice geographic mix and an attractive profitability margin," Azer said.

"They are not the largest operator in the space in terms of the number of doors (places where the brand retails), but they do have a healthy geographic mix operating across a dozen states, and they have a solid EBITDA margin."

The news also marked the beginning of a rally for the Horizons Marijuana Life Sciences Index ETF' (HMMJ), which saw its stock reach 10.76 by close of trading Friday.

At the same time, the S&P 500 managed to record an increase of 20.63% on this six-month performance chart, while Australia's All Ordinaries saw a gain of 14.66%.

Conversely, the Australian Cannabis Index continued to underperform again last week—as investors directed their attention towards the booming US cannabis market—although it is still showing a 2.86% improvement on its November 2020 outlook.

Keeping this in mind, let's examine some of the ASX-listed shares that drove the market forward last week.

The Australian pharmaceutical developer Incannex Healthcare (ASX:IHL) also saw its share price climb last week, after the company announced that it will be assessing the potential of its IHL-675A formulation to be classified as a "multi-use drug".

The change was made in response to recommendations from the US Food and Drug Administration (FDA), which recently met with Incannex to discuss the regulatory pathway that IHL-675A will need to navigate to gain access to the American market.

The directors of Incannex are delighted with the positive feedback and encouragement from the FDA at the PIND meeting and will now move forward with conviction on our clinical programs to develop IHL-675A as a multi-use pharmaceutical.Incannex CEO and Managing Director, Joel Latham

The decision to pursue multi-use pharmaceutical drug status was spurred by Incannex's receipt of positive pre-clinical results from five distinct in vivo assessments that are applicable to a variety of different disorders caused by excessive inflammation.

As a result, the company hopes to have the drug certified as a treatment method for both Acute respiratory distress syndrome (ARDS) and sepsis-associated ARDS (SAARDS), as well as inflammatory bowel disease, rheumatoid arthritis, and pulmonary neutrophilia which is considered to be the "primary underlying cause" of COPD, asthma, and bronchitis.

Under advice from the FDA, Incannex have announced that it will be combining its ARDS/SAARDS and pulmonary neutrophilia development activities into a common project, thereby expanding the programs scope and economic potential.

The FDA also agreed that marketing applications for IHL-675A should be 505(b)(2) applications—which will contain full safety and effectiveness reports—while also allowing for some of the information required for NDA approval to originate from historical studies not conducted by the company.

This will result in an "accelerated and less-costly route to approval", especially when compared with a traditional development path towards Investigational New Drug status.

"The combined annual global market size of the indications being targeted by Incannex with IHL-675A is over US$125 billion so we consider the economic potential, as well as the benefit to patients over incumbent treatments, to be enormous," Incannex CEO and Managing Director Joel Latham said. 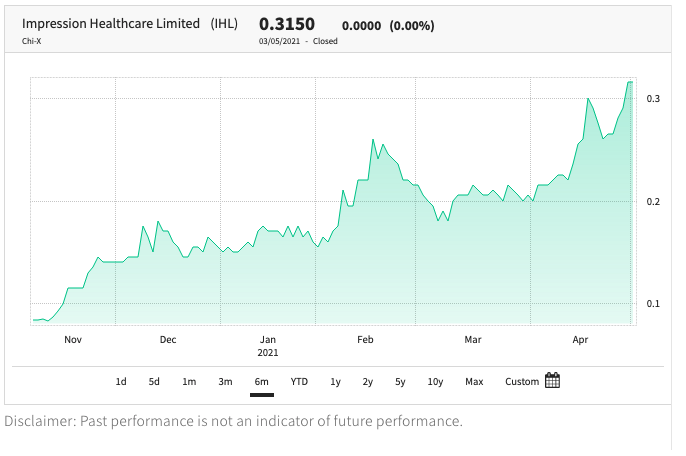 During this period, Bod also appointed a new executive and continued to engage in its ongoing R&D initiatives to build real world data that will support the efficacy of the company's medicinal cannabis.

The increase in total invoiced sales for the period is very pleasing and growth can be attributed to the completion of a number of binding purchase orders from H&H, which will result in Bod's products being sold in key markets across Europe and the UK. The continued upward trajectory in medicinal cannabis sales throughout Australia has also been a major factor in building our revenue profile.Bod Australia CEO, Jo Patterson

Bod's overall invoiced sales for this period manage to total an impressive $2,744,000, which represents a 188% increase on the previous quarter.

This growth in total invoiced sales was largely due to the delivery of Bod's CBD and hemp products to key markets in France, Italy, the UK, and The Netherlands, following the receipt of binding purchase orders from exclusive global partner Health and Happiness Group Limited.

This number was also strengthened by sales of the company's MediCabilis product, while the quarter ended with a yet-to-be fulfilled binding purchase orders valued at $350,000.

At the same time, Bod received an Australian Research and Development Tax Incentive for $760,000 to support the company's research and development activities. The company is also well positioned to pursue further expansion initiatives, after managing to retain a cash balance of over $9.2 million as of the quarter's close.

"We expect additional purchase orders to support our US market entry to be secured during the quarter, as well as the launch of our products to European consumers," Bod Australia CEO Jo Patterson said.

"We also anticipate that medicinal cannabis sales will continue to track upward in line with the growing number of users in Australia. Growth in MediCabilis™ sales will also be underpinned by uptake in the UK and the company's ability to execute on strategic R&D initiatives."

"The company remains in a strong financial position with over $9.2m in cash at bank and this leaves us very well placed to pursue a number of growth objectives." 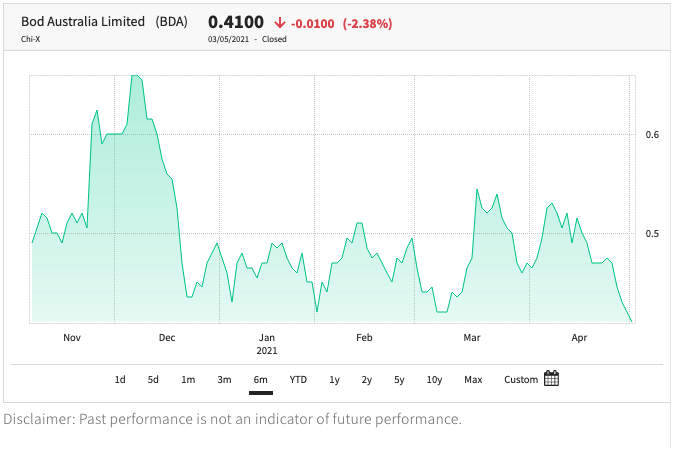 Under the terms of the agreement, Balancial will also be restricted from manufacturing or supplying similar medicinal cannabis oil or flower products until the company has purchased at least 20,000 units from Little Green Pharma.

LGP is pleased to announce another agreement for the distribution of LGP products into a prospective EU medicinal cannabis marketplace, and looks forward to collaborating with Balancial to help service our future Danish customers.Little Green Pharma Managing Director, Fleta Solomon

This was good news for investors, as the deal represents another key milestone in the company's plan to increase its European market share.

This announcement also comes hot on the heels of Little Green Pharma's previous entries into the German, UK, and French cannabis market, which has significantly expanded the company's overall distribution network.

The Danish market is also expected to be a profitable jurisdiction for LGP, as prescriptions are reimbursed by the government at a rate of 50%—constituting up to 10,000 kroner per year—while terminally ill patients are eligible for full reimbursements.

As a result, prescription volumes and patient levels have been growing rapidly since the Danish government elected to launch a four year medicinal cannabis pilot scheme in 2018.

Balancial will also be required to pre-pay 100% of the first shipment prior to its delivery and pre-pay 50% of each subsequent confirmed purchase order.

Additionally, while there is no minimum purchase quantity, each purchase order made by Balancial must be for at least 2,000 units of LGP's medicinal cannabis products each.

News of the deal caused Little Green Pharma's stock price to climb, reaching 0.70 per share by the week's close. 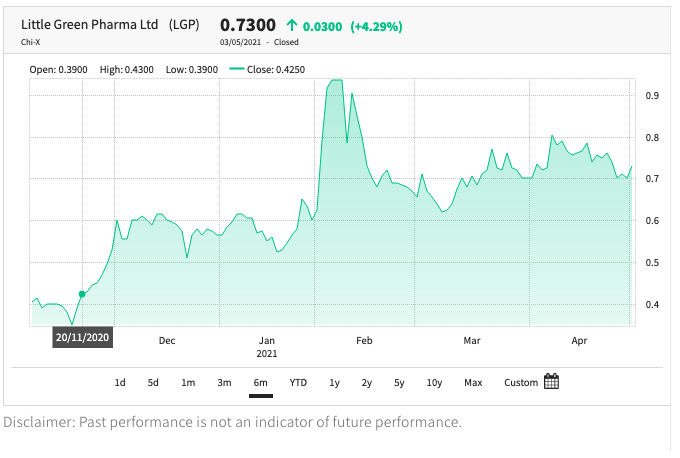 Read the original article on The Green Fund.