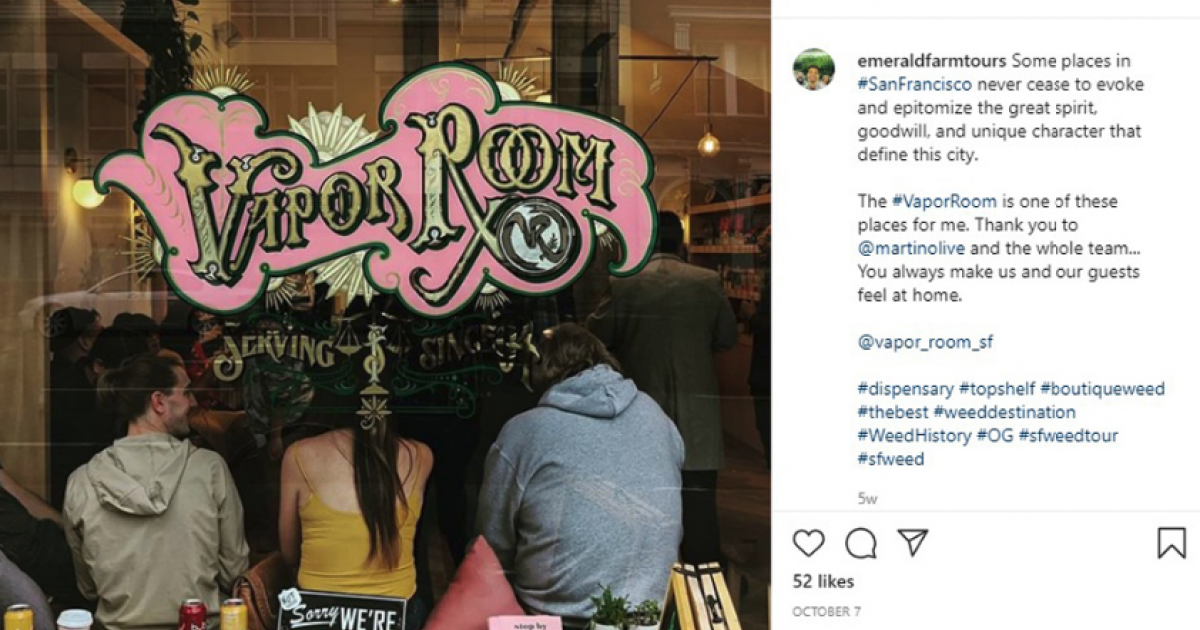 Coming into 2020, business was booming for Emerald Farm Tours with no signs of slowing.

The San Francisco-based company, which takes its guests to area cannabis businesses and cultural landmarks, experienced 200% month-over-month growth from September 2019 to February 2020 and was preparing for a “hiring blitz” as tour bookings spiked to around five per week, according to Victor Pinho, the company’s co-founder and CEO.

“And then it just stopped,” Pinho said.

He and his business, of course, weren’t alone.

The COVID-19 pandemic upended several industries, but perhaps none was more negatively impacted than tourism and subsets like cannabis tourism. Despite the economic damage suffered over the past nine months, Pinho and several others involved in the intersection of tourism and cannabis – a wide-spanning space that includes hospitality, entertainment and travel – are optimistic about the future.

They find encouragement in the overall cannabis industry’s ability to withstand crises – evidenced by consistently rising REC sales throughout the pandemic – and point to the present moment as an ideal time to reshape and rebuild. Travel in the U.S. last year was believed to have generated $2.6T to the U.S. economy, though it is unclear what portion of that came from cannabis-related tourism.

“The time is right now because the tourism and travel industry is being rethought,” said Brian Applegarth, founder of the California Cannabis Tourism Association (CCTA). “There was an immense collapse with COVID-19 and there’s been a shift in paradigm.”

Applegarth, who participated in a panel discussion Wednesday on canna-tourism presented by the National Cannabis Industry Association (NCIA), pointed to some recent trends that have him convinced canna-tourism can bounce back stronger than ever.

He recently helped conduct a national survey of American travelers in collaboration with MMGY Global, which provides market research and data to travel and tourism firms.

That survey, carried out prior to the COVID shutdowns, found that 29% of all active leisure travelers – about 18% of all Americans, according to the findings – were interested in cannabis-related activities while on vacation. About one-third of that group had not previously ever consumed cannabis.

It also found that 60% of respondents were more interested in consuming cannabis while on vacation if they were in a legal REC market with health and safety standards.

Applegarth suggested cannabis operators and others who rely on tourism, such as hoteliers, should join together to coordinate vacation experiences that would benefit them both. For instance, hotels should ensure that their concierges are knowledgeable about the local REC market and regulations so they can give proper advice to travelers.

He said a hotel concierge once directed him to a cannabis delivery service that allowed illicit operators, a move that could negatively impact a visitor’s health and also hurt the reputation of the hotel.

“Nobody has had a coordinated plan well enough and the visitors are waiting,” he said.

Amy Larson, an executive with Simplifya, a company that provides cannabis compliance software, said she has already seen those types of relationships improving in Colorado.

Before entering the cannabis industry, Larson spent more than 15 years working in the tourism and hospitality industries and is currently the chair of the NCIA’s marketing and advertising committee.

When Colorado launched its REC market in 2014, Larson said, the state’s tourism office wanted nothing to do with promoting cannabis businesses. The organization has since changed that stance, evidenced by it adding Wanda James, a well-known cannabis advocate and the first Black woman to own a dispensary in Colorado, to its board of directors.

“The fact that the tourism office here has broadened and accepted [a] view of cannabis as an essential economic stimulator is huge and I think it’s going to shift the way that we move things going forward,” Larson said.

Every market in play

Pinho, who was not part of the NCIA panel discussion, and Emerald Farm Tours began re-offering their treks around San Francisco in September.

The company offers a walking tour of San Francisco cannabis culture, a limousine version of that same tour, and a “seed-to-sale” package that takes clients on a four-hour trip to a farm, a manufacturing facility and then to dispensaries.

Pinho said he used some of the downtime this year to restructure some aspects of the business, like switching to smaller, private tours that are more amenable to social distancing.

Despite all the setbacks this year, he remains bullish. And not just in well-positioned markets like Northern California, which has a rich cultural history with cannabis.

Pinho said he believes “every single region, state and city in our country” presents opportunities for cannabis tourism, particularly since that term can mean different things to different people.

Much of Pinho’s tours focus on San Francisco’s local cannabis culture, but he said the concept isn’t exclusive.

“There’s places that have rich prohibition culture – there are stories and local legends and local activists,” he said. “By highlighting these things, you’ve in essence created an experience for your guests and you can easily drive business and sales to the local businesses and retailers that are building your local cannabis community.”

“Cannabis tourism should go hand in hand with turning on new [business] permits, always,” he added, suggesting the industry’s growth can be boosted by tourism. “That’s where the money is to be made – bringing people into the space, and being a good concierge, if you will, to their need to consume cannabis and learn about the plant in the process.”

Most importantly, she said, operators must figure out how they fit in their particular market. She said cannabis companies should look to other local attractions, like museums and restaurants, to potentially partner with for travel packages.

“Look to how you can be part of a bigger-ticket experience and that co-marketing, that co-promotion, is just going to dramatically expand your marketing dollars,” she said.

Many destinations draw their marketing funds from local hotel taxes, which are down this year due to pandemic restrictions. Cannabis tourism provides a great opportunity to make up some of those deficits, according to industry analysts.

Noting the collaborative nature of his own business, which partners with various cannabis operators around the San Francisco Bay Area, Pinho suggested canna-tourism can provide significant economic stimulus both inside and outside the industry – something he said is often discounted.

“It’s seen as like a silly thing, but whenever I talk to legislators or people who overlook this idea that cannabis tourism should exist in every market, I ask them what is their definition of cannabis tourism because I want to know why it shouldn’t exist here,” he said. “Their minds are broken open a little bit when I talk to them and explain it’s a lot more than just bringing someone to a weed farm. It’s a lot more than that.”

Endocannabinoid System: What Is It And Why Is ECS Important?

Cannabis May Be Banned For Tourists In Amsterdam