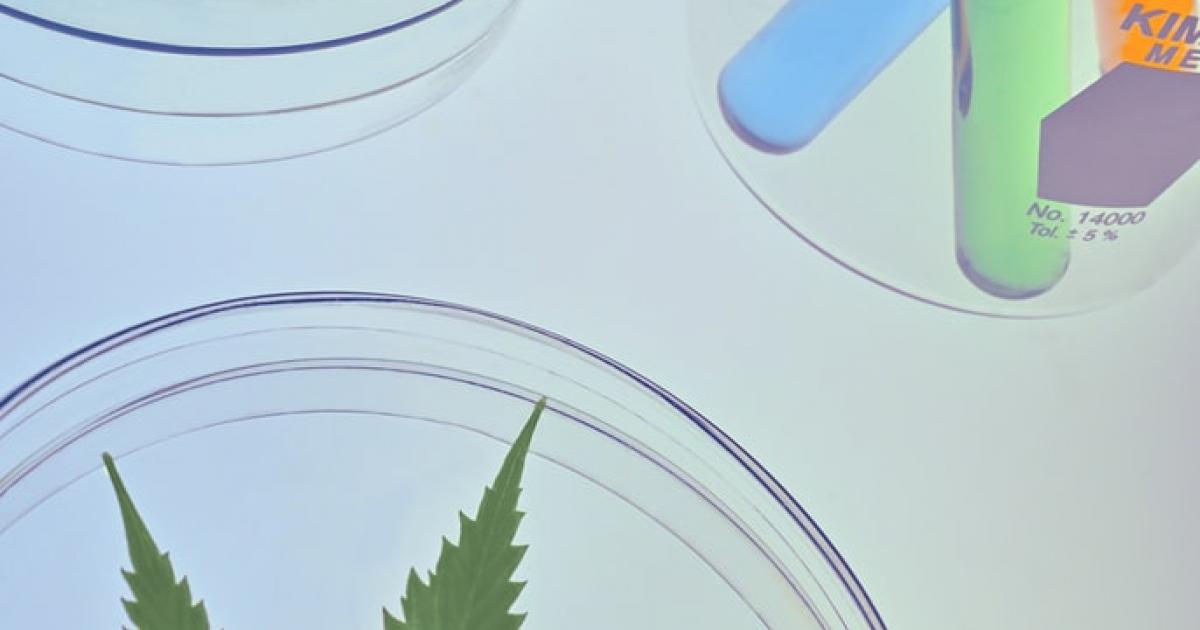 As you venture into the world of cannabis, you may hear references to a chemical process called ‘decarboxylation’. If you are feeling confused about what decarboxylation means or how to utilize it, you aren’t alone. Decarboxylation comes up most often as a method to make cannabis edibles’ psychoactive effects more potent, but it actually goes far beyond a simple cooking technique for edibles.

What does ‘decarboxylation’ mean? Well, it is a key reaction in the process of creating the cannabinoids that produce some of cannabis’ most medicinal effects. By understanding how this process works, you can better understand how to predict the effects of different cannabis options and thus use cannabis more effectively.

Curious to learn more about this key chemical reaction? Read on to discover the science behind decarboxylation and learn how to decarboxylate your own cannabis for optimal results. 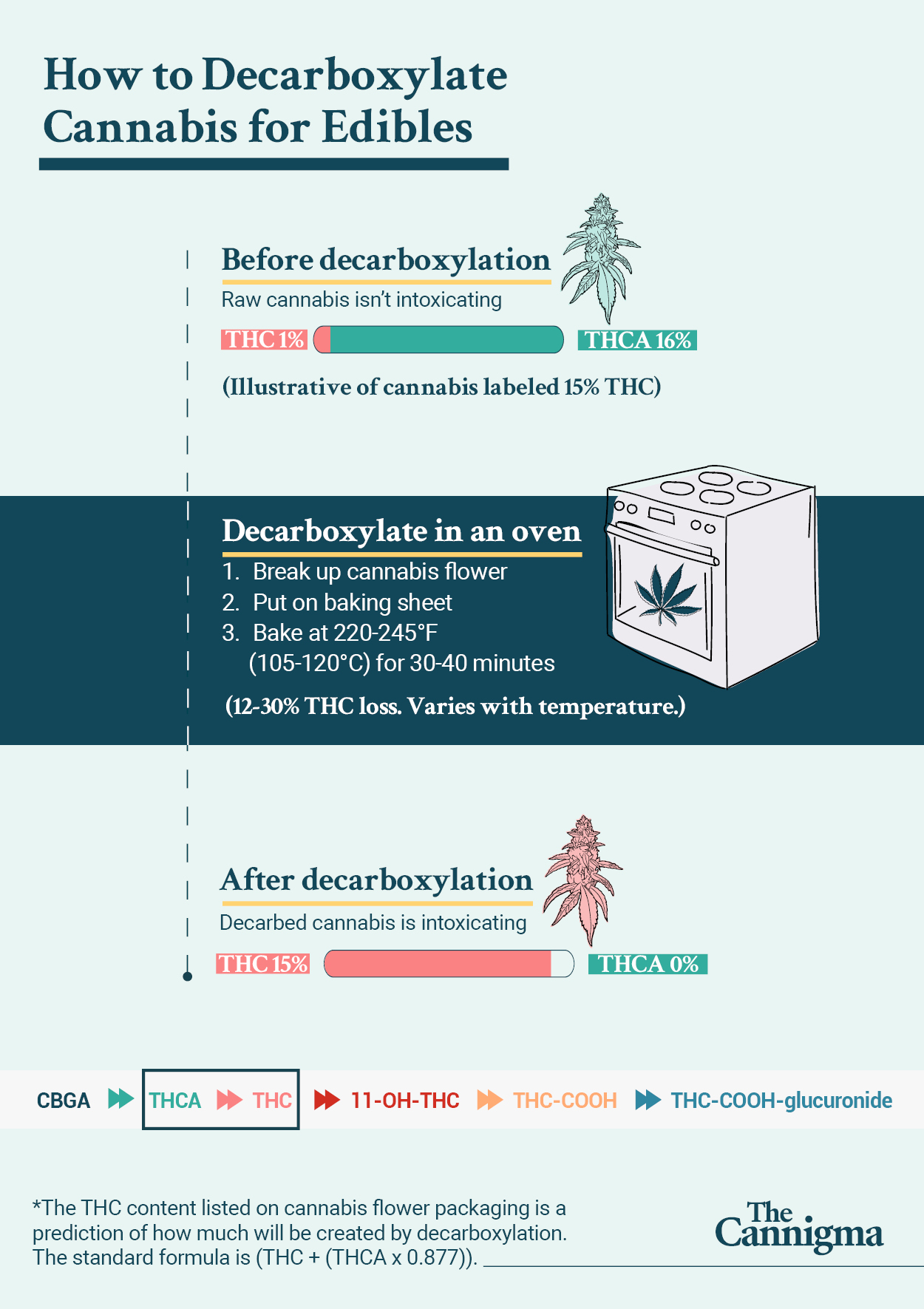 How cannabinoids develop and transform naturally

To understand decarboxylation, you first need to understand that cannabis is full of active chemicals which cause its many medicinal effects. In fact, there are over 500 different chemicals identified in the plant, and more than 144 of these chemicals are cannabinoids, the compounds that are mostly unique to cannabis. Understanding the process of decarboxylation requires understanding how cannabinoids form in the cannabis plant, in the first place.

CBGA: The mother of all cannabinoids

Interestingly, most acidic precursors in the cannabis plant also have their own acidic precursor. CBGA is a precursor for THCA, CBDA, and CBCA in addition to CBG. In the early stages of plant growth, the main cannabinoid present is CBGA, but as the plant grows and metabolizes, these shift into the other acidic precursors. For this reason, CBGA is often referred to as the “Mother of All Cannabinoids” — the first stop on all the other cannabinoids’ journey of transformation, which can produce almost any cannabinoid if the conditions are right.

Sometimes people refer to the entire class of CBG related cannabinoids this way. Others reserve the “Mother of All Cannabinoids” as a way to refer to CBGA, and refer to CBG in its neutral form as the “Princess of Pot.” She’s the only non-acidic cannabinoid to form directly from CBGA, so the title is a nice fit.

To get a better idea of how this process works, let’s look at an example. Take THC, for example, the most abundant and talked about cannabinoid in most types of cannabis. THC is the neutral form, but it starts out as CBGA and then transforms into THCA, the acidic form of this cannabinoid. When you purchase cannabis in its raw flower form, it won’t have very much THC present at all. It is the acidic form, THCA, that is actually present in large amounts. In this acidic form, THCA has some great medicinal benefits, but it isn’t psychotropic at all. THC, on the other hand, is extremely psychotropic.

To transform the THCA into THC, a decarboxylation reaction has to take place. This can occur from heat, light, or oxidation over time, but whatever the trigger, it transforms the cannabinoid from one chemical structure to another — the acidic form to the neutral form.

If you use inhaled methods of consuming cannabis, like vaporizing or smoking your cannabis, this process happens as you heat it to produce smoke or vapor. The heat from your flame or heating element will automatically convert your THCA into THC as the cannabinoids are heated and inhaled.

If you are eating your cannabis, on the other hand, you need to decarboxylate your medicine before consuming it. A common mistake in making edibles is forgetting to take this important step. The result is an edible that doesn’t provide the expected psychoactive effects.

Decarboxylation is usually talked about for THC and THCA, but the other cannabinoids have their own acidic precursors, as well and also only take on their neutral forms after something has caused a transformation. CBD comes from CBDA, CBC comes from CBCA, and CBG starts its life as its acidic precursor CBGA.

But the story doesn’t stop there. These neutral forms can continue to transform into what is called an “artifact” or “product of degradation.” To continue with THC for example, if it were to be exposed to heat, light or oxidation over time it would continue to transform and may turn into CBN or Delta-8 THC, THC’s “artifacts.” These artifacts are also medicinal cannabinoids, but with very different effects.

Understanding what form of a cannabinoid you will be consuming is an important part of understanding how a cannabis product will affect you.

What is a decarboxylation reaction?

Well, when plants are growing, they go through a process of photosynthesis, where they gain energy from the light of the sun. One part of this process is called “carboxylation” where CO2 is condensed into an organic molecule. From this, acidic cannabinoids are born. But these molecules are fairly unstable.

Later, during decarboxylation, the reverse happens. When exposed to light, heat, or oxidation over time, the carbon atom breaks away from the organic molecule, shifting its structure to the neutral form.

You might be wondering how to use this information in your daily experiences with cannabis. Decarboxylation is helpful to understand in a variety of different contexts with your medicine but there are two that come up often: choosing cannabis products, and cooking with cannabis.

There is a large variety of cannabis products to choose from these days, and one of the biggest factors you should be considering is what cannabinoids are present in your medicine. Depending on the blend of cannabinoids, you might experience a very different set of effects.

For example, a high THC product is going to be very different from a high THCA product. So, understanding what is in your cannabis is important, and test results are often available to tell you exactly what’s in the product.

But the role of decarboxylation can complicate this. Depending on how you are planning to use the product, you might end up consuming different cannabinoids than are present in the product when tested.

Consider, for example, the difference between getting a tincture that is high in THCA and a cannabis extract that is high in THCA. In the case of the tincture, you’d be ingesting it directly, so no decarboxylation will take place. This means that you should expect a non-psychotropic experience with lots of anti-inflammation effects.

In the case of the extract, you will likely be vaping or smoking it. As you heat the extract to consume it, all that THCA will be decarboxylated and converted into THC. This will provide a psychotropic high and a range of medicinal effects.

These are two very different experiences from products with the same active ingredients.

To heat or not to heat

Still, depending on the product, you might see test results with only THC, CBD or other neutral forms of cannabinoids. This can be a bit confusing because these neutral cannabinoid percentages actually refer to the amount of both the neutral form of the cannabinoid and the acidic precursor.

Most testing labs use high-performance liquid chromatography (HPLC) for their tests. This method does not use heat, so samples are not decarboxylated. Still, when working with HPLC, usually labs will predict the number of neutral cannabinoids that will be in the final product should it be decarboxylated completely. So for example, to find the amount of potential THC, labs would add the THC numbers with THCA numbers that had been multiplied by the conversion factor to account for the decarboxylation process. The total number will be reported as THC even though the majority of it is still THCA. If you see results with only the neutrals listed, and it’s not already in an edible, you should assume that the vast majority of the cannabinoids are actually still in their acidic form.

A note on terpenes

For products that you’ll be heating, you might also want to consider the effect decarboxylation has on the terpenes in your cannabis. These chemicals tend to have a lower evaporation temperature than cannabinoids. So if you are trying to preserve these, lower temperatures are better. If you are vaping, you should keep in mind that temperatures over 400°C can cause terpenes to degrade into chemicals with known carcinogenic properties, so it’s best to aim for lower temperatures.

How to decarboxylate for edibles

The other case where decarboxylation comes up often for cannabis users is when making edibles. Decarboxylation is not a necessary step for making cannabis edibles — but it is necessary if you want to get the effects of a neutral cannabinoid. As described above, if decarboxylation is skipped when making a THC edible, it will end up being a THCA edible without a strong high or the normal set of medicinal effects that THC provides. This is also the case with other neutral cannabinoids. If they aren’t decarboxylated, they won’t provide their expected effects.

To decarboxylate cannabis in preparation for use with edibles, most people use an oven to slowly heat their cannabis to the required temperature.

To do this, first, preheat your oven. Temperatures for this can vary depending on how long you’ll leave your cannabis in the oven and what cannabinoid you are hoping to decarboxylate. For shifting THCA into THC, a standard temperature is preheating your oven to 220-245°F (105-120°C).

Next, break up your cannabis into small pieces and place it on a baking sheet. When your oven is fully preheated, put the tray of cannabis in the oven and let it bake for 30-40 minutes.

CBD decarboxylates at a higher temperature, so if you are working with high-CBDA cannabis, set your oven to 280°F or 140°C and leave it in for 60-90 minutes.

Once you are finished baking your cannabis flower, it will be ready for use with edibles.