From Berner And Snoop To B-Real And Drake: A Timeline Of The Rappers With Their Own Weed Brands 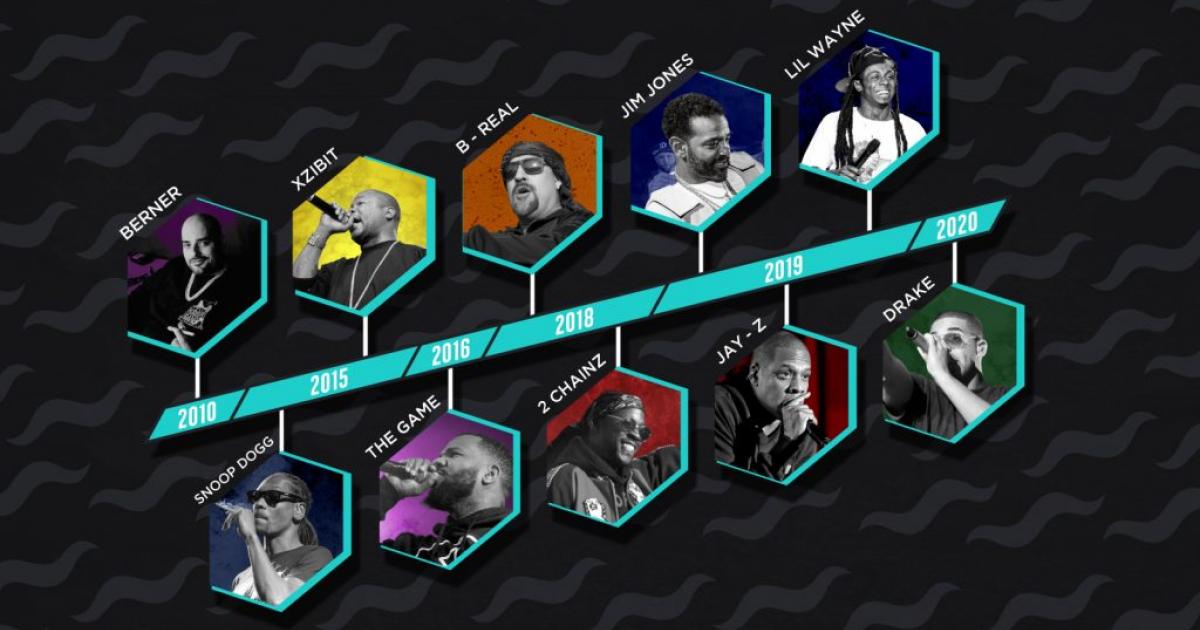 Whether it be Mike Tyson's foray into flower production, Tyson Ranch, or Martha Stewart's new Snoop Dogg-approved role as “America's Cool Weed Grandma,” celebrity involvement in the cannabis industry is at an all time high. However, it's important to remember that no mainstream genre has been more influential, or vocal, in weed's journey toward public acceptance than rappers.

From artists touting their involvement in the business of selling weed long before it was a legal business to be in, to the Snoop Doggs and Wiz Khalifas of the world, whose brands are as synonymous with being stoned as they are with making music, the link between rap and weed is not only clear, it's intrinsic. “Me, Snoop, B-Real, and Method Man, we're the forefathers of this,” the rapper Redman told Forbes in a recent interview preempting the launch of his own weed brand. “So why not make money off it the right way?”

While tons of rap stars have their own strains distributed through pre-existing brands, there's a big difference between, say, walking into a dispensary, picking out the most purple nug they have and naming it after yourself (which Riff Raff actually did at a California dispensary in 2015), and Berner who runs Cookies, a straight-up marijuana empire.

For the sake of time, space, and our sanity, the following chronological list covers only the rappers who actually have their own cannabrands, not those who have launched strains through pre-existing companies.

2010, Berner starts an empire with GSC No one kills it harder in the weed game than bay area rapper Berner, whose reputation as a cannabis mogul has all but eclipsed his success in music. It all began in 2010 when Berner, at the time an underground dealer, turned on Wiz Khalifa, then a little known rapper, to the now uber-famous strain GSC. Now, ten years later, and what started with a single GSC strain has now become Cookies, one of the biggest brands in cannabis. In addition to multiple dispensaries and a clothing/stoner merch line that's even sold at Zumiez, he's also launched a hemp-infused vitamin water called Hemp2o.

While it may seem that moon rocks, or nugs dipped in concentrate then rolled in kief, is a product type all its own, they were officially launched in 2014 by Kurupt, the former VP for Death Row Records and alumni of Snoop's Tha Dogg Pound. An accompanying 23 track mixtape featuring stars like Kendrick Lamar and, again, Wiz, helped to pop off this infamous invention. After years of pot advocacy rivaled only by the likes of Willy Nelson, 2015 saw Snoop legalize his status as the Dogg Father of weed. Preempting 2016's legality in California, Snoop launched the flower brand Leafs By Snoop out of Denver, Colorado, in November 2015, just two months after creating Merry Jane, a cannabis culture media platform still killing it to date. Founded in 2015 owned by Xzibit, the pedigree of vape brand Brass Knuckles should precede itself. While initially successful, a 2018 pesticide contamination lawsuit marred their public image. And while the case ended up being thrown out of court, three of the brand's investors have launched an additional lawsuit, this time against Xzibit (and Dr. Dre), seeking compensation for monetary damages and breach of contract. August 2016 saw LA rapper, The Game, become the first celebrity to own his own dispensary by becoming a partner in the Santa Ana pot shop, The Reserve. He's also launched Trees by Game, a canna-company that's part investment firm, part lifestyle brand, as well as G Drinks, which he launched in April 2016 with GFarmaLabs, a cannabis-infused line of lemonades.

Southern rap icon and near billionaire mogul Master P has done it all. From playing in the NBA and putting Southern hip-hop on the map, to launching an all-black TV network and even enjoying a somewhat-prolific acting career, it comes as no surprise that cannabis would be next. In 2016, Master P launched Master P's Trees, which according to its press release slated the brand as “a complete lifestyle,” including flower strains, edibles, and liquid gold vapes with Southern flavors like Sweet Tea and Peach Cobbler.

Unfortunately, the project was short-lived and never fully got off the ground due to the ongoing $25 million lawsuit between Master P and his business partner. B-Real, Cypress Hill frontman and one of rap's first stoner legends, formally got involved with the industry he helped shape by opening Dr. Greenthumb, a dispensary in Sylmar, California, named after one of Cypress Hill's biggest hits. Rapper extraordinaire 2 Chainz went legal with a line of pre-rolls and flower eighths called Gas Cannabis Co. Keeping it simple, prerolls and flower are available in three “octanes,” the affordable 87, the mid-ranged 89, and the super high-end 93. After a long history of incarceration for marijuana-related arrests, Dipset rapper Jim Jones finally went the legal route, launching Saucey Farms, a flower/vape line with friend and celebrity jeweler, Alex Todd. We were lucky enough to attend the brand's launch party over the summer, and if the opulence displayed at that rap-star-studded Beverly Hills mansion soiree was any indicator, they're doing just fine. While Jay Z didn't build the canna-brand Caliva from the ground up, he was brought on board as chief brand strategist in July of 2019. Months later, Caliva opened its first SoCal store in Bellflower, California, which was designed to mirror the experience of a retro deli in NYC, the rapper's home city. Never one to hide his love for weed, skateboarding, and really all things counterculture, Lil Wayne has taken his obsession to the next (legal) level by launching GKUA Ultra Premium, a one-stop-shop for all your Tunechi-related smoking products, from flowers and concentrates to a line of vapes, all named by the master wordsmith himself.