Cannabinoid Activation And The Metabolism: What Cannabis Consumers Need To Know

The use of cannabis for medical or recreational purposes is becoming a widespread phenomenon, as more and more countries throughout the world legalize its use. That makes sense. Simply trying cannabis once is enough to convince many people of its ability to make an impact on pain, sleep, mood, hunger and an array of other bodily functions. Still, even among cannabis consumers, few understand exactly how or why this plant can produce such a large variety of different effects. But while this may remain a mystery to many, scientists do have a strong understanding of how cannabis interacts with our bodies.

So, in this piece, we’ll walk you through the ways that cannabis activates these varying functions and how some of its active chemicals, a class of molecules called cannabinoids, are metabolized in the human body.

To fully understand this story, let’s start at the beginning. In ancient times, when humans were evolving into the kind of creatures that we are today, we were all hunter-gathers. We ate all kinds of different plants that we found while foraging. But many plants produced toxins, so our bodies had to be creative about how to gain nutrients and energy from these plants without being poisoned by them.

In order to survive feeding on so many toxic plants, we developed the ability to detoxify many otherwise dangerous substances and eliminate the plant-based toxins from our bodies.  This process of detoxification is pulled off by enzymes (primarily in our liver and GI tract).

But we rarely eat poisonous plants these days — we have discovered a variety of medications from these plants — so scientists usually refer to these important enzymes as “drug-metabolizing enzymes.” 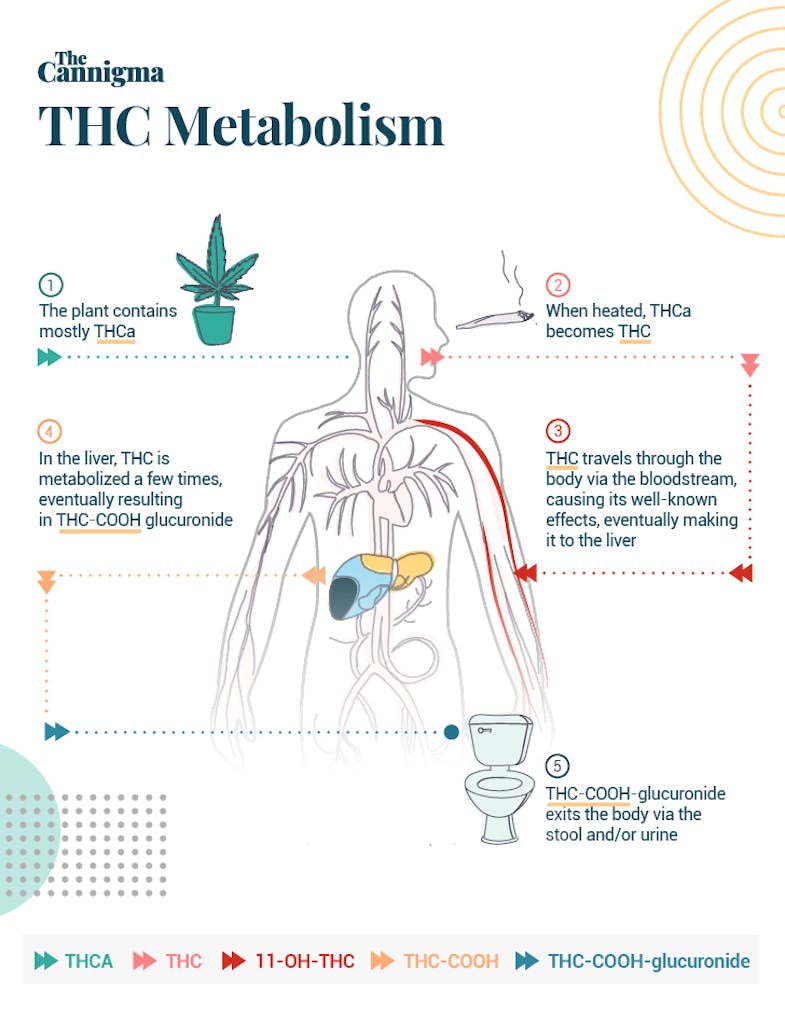 Drug metabolism simply refers to the way that drugs are transformed and converted from one chemical form to another via the chemical reactions in living organisms.

This process is generally considered a detoxification process — because without it many drugs would stay in our system and cause toxic reactions. Generally, the more quickly a drug can be eliminated from your system after it has played its intended role, the less adverse side effects can be expected, so this natural process of detoxification is vital to the safe and effective use of many medications.

Sometimes people talk about this metabolism process as “breaking down” chemicals in your body, but in most cases metabolism actually does the opposite — adding in more molecules to the chemical structure. As it turns out, often the larger the chemical becomes, the easier it is to eliminate it from your system.
So how does drug metabolism work? In general, drug metabolism primarily takes place in the liver, due to the presence of a large amount of different enzymes. But it doesn’t take place exclusively in the liver, and metabolization of drugs can take place in every biological tissue present in the human body. Still, these other sites are involved to a more limited extent in this process when compared to the liver.
The drug metabolism itself takes place in two different phases:
In phase 1, enzymes (usually from the cytochrome P450 group of enzymes) initiate a chemical reaction that adds an oxygen molecule to the drug. While phase 1 might also produce compounds that are easier to eliminate from the body, most of the chemicals created in phase 1 aren’t ready for elimination yet.  Therefore, they move on to undergo phase 2 reactions.
In phase 2, these modified chemical compounds undergo another round of chemical reactions where another larger molecule is linked to the drug. Catalysed by another class of enzymes called transferase enzymes or UTG’s, this transformation causes the chemicals to become soluble with water — and thus able to be eliminated from the body in urine.

To understand how cannabinoids metabolizes, we first need to understand how cannabinoids start out. You might be familiar with the two primary cannabinoids THC and CBD, but did you know that these two chemicals start out in a different form? Cannabinoids actually begin life in an acid form (in other words they have a carboxylic acid attached to their structure). So in raw cannabis flowers, like those used for smoking, vaping or making edibles, there isn’t much THC or CBD. Instead, we find THC-A and CBD-A — their acidic precursors.
While these precursors sometimes have active medicinal effects, they tend to be markedly different from their well-known neutral forms. Take THC-A, for example. It shares THC’s anti-inflammatory effects, but unlike THC, it produces no psychoactive high.
Given that THC-A is the main cannabinoid present in cannabis flower — where does THC come in? Well, THC becomes active when THC-A is transformed through a process called decarboxylation. Decarboxylation usually occurs with heat, so it happens naturally when you burn or heat cannabis to smoke or vaporize it. If you are eating cannabis, however, it’s a good idea to heat it first to decarboxylate it. If you eat cannabis without decarboxylating it, it will not give you the normal effects of THC (such as feeling high). CBD-A also needs to be decarboxylated to access the benefits of CBD, and the same goes for most of the minor cannabinoids.

Of course, it’s important to get good instructions for decarboxylation before you start cooking. Heat these cannabinoids too much and they will degrade — diminishing the dose of active cannabinoids significantly.

The Endocannabinoid System and Cannabis Activation

Once cannabinoids like THC and CBD have been consumed, absorbed into our bloodstream, and deposited into tissues throughout the body, they can begin to cause their famous effects. But how does this happen?

Cannabis’ effects all revolve around the way it interacts with the endocannabinoid system. This important system in the human body is responsible for maintaining homeostasis for many key functions like sleep, pain, memory, hunger, inflammation, and mood.

The natural activation of this system can affect us in many different ways, making us sleepy or energized, relaxed or anxious, hungry or without an appetite, in pain or without pain, and so on. But importantly, this system and the many ways it manifests can also be activated by the cannabinoids in cannabis. In fact, the endocannabinoids system was first discovered by researchers trying to understand how cannabis affects the human body.

At this point, you’ve activated and consumed the important cannabinoids and they should be circulating through your bloodstream. So how does our body react next? Well, this where drug-metabolization begins. First, your pumping heart will send blood to your liver, and the cannabinoids contained in your blood will be metabolized by your liver cells.

While the liver is the primary location that metabolic transformations take place (due to the high level of enzymes), cannabinoid metabolism can also take place in other tissues. For example, it’s been shown experimentally that THC can be metabolized in the brain.

These liver cells actually contain most of the drug-metabolizing enzymes that you need for the transformation process. The new molecule produced by this process is known as a metabolite.

While there are many different ways cannabinoid metabolism can happen, it commonly takes place in the following two phases — much like with other drugs.

Phase 1 metabolization is all about hydroxylation and oxidation. In this phase, particular enzymes in the cytochrome P450 family hydroxylate part of the cannabinoid, adding an oxygen and hydrogen molecule to its structure.

With THC this leads to the creation of 11-OH-THC, a very pharmacologically active metabolite, known for its sedative and psychoactive effects.

Interestingly, we see lower levels of 11-OH-THC in blood plasma when someone has smoked cannabis than we do when cannabis is eaten. This is primarily because THC is processed via the digestive system when eaten, and so much more of it is processed by the liver and converted to 11-OH-THC before making its way into the bloodstream.

Then, when 11-OH-THC is oxidized by the same cytochrome P450 family of enzymes, it produces THC-COOH, an inactive metabolite which is one of the main end products of cannabis use. By 30-45 minutes after smoking,  THC-COOH concentrations have usually gradually increased and are found in higher levels than THC concentrations. This indicates that the THC is being metabolized into these derivatives — which are no longer able to bind to cannabinoid receptors and so are without medicinal effects. Notably, THC-COOH is the biomarker commonly used in drug testing for cannabis to detect the presence of cannabis in urine.

Other cannabinoids, such as CBD, go through similar processes, undergoing metabolization into a variety of metabolites. Although notably, a large portion of any CBD dose passes through the system unchanged and is excreted in feces.

Interestingly, the enzymes responsible for phase 1 metabolization can vary from person to person, due to genetic factors. So some people metabolize THC and CBD differently from others. Some experience the psychotropic effects longer than others, or be more likely to fail a drug test due to a higher accumulation of cannabinoids in their system.

Phase 2:
In phase 2, the process is all about preparing the drug to exit the body. In this step, UGT enzymes are able to connect a glucuronide molecule to THC-COOH. This turns the chemical into a THC-COOH-glucuronide molecule, which is easy to excrete from the body in substances like urine and fecal matter. Once transformed into this metabolite, the drug is ready to be eliminated from the body.

In the last stage of this process, the metabolites of THC are eliminated from the body when the person urinates or has a bowel movement.

Within an average of 5 days, 80-90% of THC and (mostly) its metabolites will have been excreted, with more than 65% exiting via feces and 20% being eliminated via urine. But this isn’t the end of the story. Some of the THC (and its metabolites) will remain bound up in the tissue, and will be released more slowly. This is why THC’s metabolites can be detected weeks after use for some cannabis users.

As we can see, cannabis’ active components take a long journey from absorption to elimination — transforming from one chemical to another as they go. What starts out as THC when we first absorb it, will likely end up as a totally different chemical by the time it exits your body. Still, this incredible process enables cannabis to enter our system, provide its impressive array of effects, and then exit our system without building up — making medical cannabis use possible.