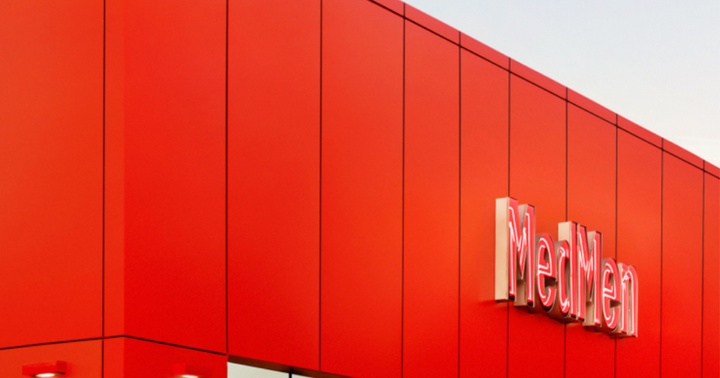 By Natan Ponieman and Javier Hasse.

Medmen Enterprises Inc. (OTC:MMNFF) has the premier brand and pre-eminent footprint in the U.S. cannabis industry, CEO Adam Bierman said in an interview with Benzinga.

The CEO acknowledges that MedMen was forced to lay off over 40% of its workforce during the last months of 2019, but emphasized the entering of a new chapter in the company’s history.

It's a chapter where profitability is king and the “growth-at-all-costs” mentality is a thing of the past, he said.

MedMen’s main strategy in securing the place it now has in consumer minds was “locking up the real estate,” Bierman said.

“Miami Beach, Las Vegas strip, Beverly Hills, Chicago … it's not just the city," he said. "It's the location within the city."

The thesis is that having a strong presence in well-known areas will lead to international awareness, and Bierman said it's being proven today via search engine metrics.

One example is MedMen’s presence in Nevada.

Google search interest for MedMen in Nevada is triple that of any other state, even though Nevada isn't the company's largest market by sales.

'They Want To Experience This Brand'

This is no accident, since part of the strategy that led MedMen to where it is today has to do with finding strategic locations that position the brand as a global leader, the CEO said.

MedMen is the closest dispensary to both Las Vegas’ McCarran Airport and Los Angeles International Airport, which is also one of the most searched terms accompanying “MedMen.”

“Airports are where the world interacts, and how the world gets exposed to new and other things. So the closest we can be to these airports, as you've seen where we put these stores, we think that's a big part of our strategy.”

Still Focusing On The US

Thanks to these and other strategies, like the launch of a viral ad campaign directed by Spike Jonze, MedMen is probably one of the most globally recognized cannabis brands in the world. Unlike MedMen, most cannabis brands do not enjoy global name recognition. .

"Today, it's all about focus, getting deeper, hunkering down on our financial performance, and the four-wall economics of the stores that we have and continuing to build that brand equity through the assets and locations we currently have in the U.S.," Bierman said.

MedMen is still considering expansion to other markets in the long-term, he said.

“At that point in time, our opportunities to monetize this brand are pretty limitless. I think the discipline here is to not jump the gun and get distracted even though those opportunities present themselves to us daily.”

MedMen over-the-counter shares were down 3.67% at 58 cents at the close Friday.