Can The Cannabis Industry Be Inclusive? This Weed Party Thinks So 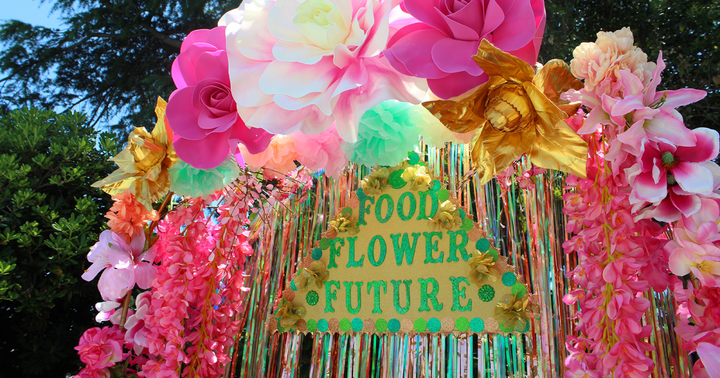 Weed Party @ is a column by Michelle Lhooq and Lindsay MaHarry, two self-described “weed party girls.” The goal of the column is simple: Determine whether the party was cool. On June 22, 2019, Lindsay went to Food Flower Future's weed brunch celebrating the women, queer, and diverse individuals making the cannabis industry more inclusive.

It's no secret that the cannabis industry, like mostly all industries before it, has been mostly represented by straight white men. And while there's still much work to do with regards to women, people of color, and LGBTQ people holding positions of leadership, the industry has seen an explosion of inclusivity and creativity in the past few years.

Lest we forget, the plant itself is female, and since weed's explosion onto the scene in the 1960s, LGBTQ activists have been among the most influential in the fight for legality.

On June 22, 2019, Food Flower Future and the hip, new cannabis brand Sonder threw a brunch celebrating the female, queer, and people of color's future of an industry, and proved with flying, rainbow colors that this wave of inclusivity is building toward a crest.

Down an idyllic street in Los Angeles' San Fernando Valley, past thriving green lawns, perfectly hedged roses, and the kind of sun-dappled silence that can only be found in the poshest pockets of suburbia, sat a nondescript, rather neutral home. Inside, however, was anything but. Guests of Food Flower Future sit in front of enlarged cannabis boxes of Sonder, which presented the June 22, 2019, event in a suburban Los Angeles home. (Photo by Camille Ochoa)

Walking into the brunch was like entering a kaleidoscopic 1970s San Fernando Valley party. Think that iconic pool party scene in “Boogie Nights” minus the sex, cocaine, and toxic testosterone. Instead, in the spirit of Pride, everything burst with rainbows.

Related Story: Want to Get a Medical Marijuana Card? Here's What You Need to Know

Ruby Dora Design created the bright, fun aesthetic, which played on the backyard pool area as woman- and queer-owned brands provided party favors dispensed from beautifully designed booths. 3Leaf Edibles made cocktails with THC gummies, Papa & Barkley offered dabs of its epic line of live resin concentrates, and Old Pal had a joint-rolling station. But it was newcomer Sonder, the event's main sponsor, that truly stole the show.

Sonder, the Mendocino County-based wife-and-wife team, recently launched a line of vape pens combining their respect of design and love for their family-run, Emerald Triangle-farmed cannabis into one fabulous product. “Women are pioneering a different relationship with cannabis that is wonderfully diverse, fiercely inclusive and unrelentingly joyful,” said co-founder Faun Chapin. “All of that is on display here today, the aesthetics and even the food were all conceptualized and executed by women.”

Social media influencers snapped photos inside a tinsel rainbow archway as tarot cards were read between giant Sonder blocks in lush flora. All of the guests and all relevant figures in cannabis space, including Merry Jane video producer Urs Mann, DJ/event producer in the LGBTQ community Irene U., public relations dynamos Thomas Giordonello and Alice Moon, and influencers like Tiara Kelly and Emily Eizen, generally sparkled. It wouldn't be a San Fernando Valley backyard party without a pool, where guests of the Food Flower Future gathered for a weed-fueled brunch at a private home on June 22, 2019. (Photo by Camille Ochoa)

At this point, I'd sampled most everything this wondrous place had to offer and thus had become quite stoned. The buffet, a colorful spread of vegan delicacies by Plant Base Collective and Grassfed Bakery, had thankfully just begun.

It was in the buffet line that I ran into the woman of the hour, Khara Pechtes, founder of Food Flower Future. In addition to throwing this vibrant, shimmering party together, Pechtes also partnered with APLA Health, a nonprofit health-care organization serving the LGBTQ and other communities to help individuals living with HIV and AIDS. The first cannabis event the organization has ever partnered with, guests were encouraged to donate personal hygiene products like toothbrushes, shampoos, soaps, and feminine products, and proceeds from the event were used to purchase more of these items for donation. “Food Flower Future events cater to women in an effort to bring women of all ages, nationalities, gender, and various socioeconomic backgrounds together,” Pechtes said “The focus and goal is to provide a safe space of inclusivity, featuring women-owned and -run brands, queer, POC, and those who identify as womxn. In cannabis and as women, we are coming to the table as equals, the barriers are broken down and we can more easily share the bond and admiration for this female plant that connects us to one another.” As the sun began to fade in the early summer sky and the party wound down to the gift bag hour, I found myself sitting with Mann, the aforementioned producer of cannabis video content. “APLA was at the event, which was great to see,” he said. “We got to meet some amazing queer brands we didn't know about, which is always exciting. It just felt great to be celebrated, knowing the cannabis industry is finally acknowledging us.”

Photographer, model, and weed influencer Emily Eizen, couldn't have agreed more: "The event was such a positive celebration of queer folks in the cannabis industry, from the brands that were represented, to the guests themselves. I felt so comfortable being around my community, having fun, eating amazing food, all for a great cause.

“APLA Health is such an important resource to LGBTQ+ folks. Having them involved really gave me hope for the future of our industry,” she added.

“Hopefully more event planners and brands took note of the success of this event. It wasn't just fun and getting high for the sake of it. We were all there to support one another and raise awareness. Queer people pioneered the cannabis revolution out of necessity, due to the AIDS epidemic. My hope is that we keep queer culture thriving in cannabis not just in the month of June, because it was queer people who got us to where we are now."