California Marks 1 Year Of Recreational Marijuana: How Much Cannabis Was Sold?

At the end of the first quarter of 2018, we spoke with GreenWave Advisors’ Matt Karnes, who said California cannabis sales could hit $2.5 billion in 2018, mostly in line with estimates out of BDS Analytics and Arcview Market Research.

Now that a year has passed since recreational marijuana sales commenced in the largest legal marijuana market in the world, we’ve decided to look back at the figures and how they compare with the estimates.

Total 2018 recreational sales in California were about $1.2 billion, according to the state, which recently reported its fourth-quarter recreational cannabis sales tax collections.

Implied revenues for recreational cannabis sales were down 5 percent sequentially, to $339 million.

Medical marijuana sales were excluded from these numbers, as they are not subject to sales tax.

Assuming that roughly 40 percent of total sales are medical — based upon GreenWave Advisors’ channel checks — total California marijuana revenue was approximately $2 billion in 2018.

The Cannabis Capital Conference is coming back to Toronto April 17-18!

“As the state works through its ‘growing pains’ with respect to licensing procedures and as final regulations are implemented, we expect an acceleration in revenue growth for 2019 and beyond to reach its full potential of $6.5 billion by 2022,” Karnes told Benzinga.

“This estimate is lower than our original forecast of $2.5 billion,” Karnes said, addding that the illicit market continues to thrive, putting pressure on legal cannabis sales and prices.

The Golden State had about 650 licensed retail locations in the fourth quarter, a notable improvement from approximately 450 in the third quarter. The overall market remains underpenetrated, Karnes said.

To put the numbers in perspective: Colorado had approximately 540 retail licenses with a population of 5.6 million.

Rufus Casey, CEO of the third-party seed-to-sale tracking and compliance software company GrowFlow, said that while the California recreational cannabis program has officially started, “we are not seeing the implications of it from a revenue standpoint."

"With the implementation of the state Track-and-Trace program, we are confident that the state will be successful in preventing diversion and collecting the taxes that they had hoped to see this year.”

Another company that shared its data exclusively with Benzinga is Jane Technologies, an online marketplace operator.

While many factors contributed to regional differences, from local regulations to the availability of products on the black market, the transactions on the e-commerce platform reveal some notable trends.

The tables below summarize the year for Jane's California business:

How Do Regulations And Taxes Come Into Play?

A commonly cited argument in favor of legalization is the tax revenue opportunity from the legal cannabis market. Given the popularity of legalization and the high demand for cannabis, sales of legal weed could result in a significant inflow to the state’s coffers.

In addition, cannabis businesses in the state face all sorts of fees that the state as well as local governments can levy.

Demand for cannabis was strong in California last year, but wholesale prices fell.

The wholesale price for cannabis in California opened 2018 at $1,455 per pound and closed at $1,196 per pound, averaging $1,197 per pound for the year, according to Cannabis Benchmarks.

The chart below shows the trailing four-week averages of the U.S. Spot Index, as well as those for the “Big Four” markets of California, Colorado, Oregon and Washington. 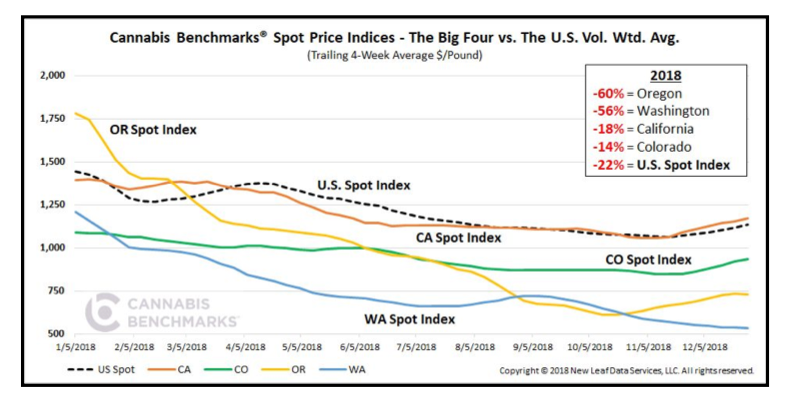 “Despite similar seasonal growing patterns in the West Coast states, the behavior of supply side rates was unique in each of those markets. Expanding and increasingly competitive markets on the West Coast, along with good outdoor growing conditions in 2018, provided ample opportunity for wholesale price erosion," Rubin said.

Why Banning 'Marijuana' From The Cannabis Industry Doesn't Work