It’s the last week before the Benzinga Cannabis Capital Conference, the premier gathering of cannabis entrepreneurs and investors in North America, which will take place in Toronto next Thursday and Friday.

El Grupo Daabon, the largest organic agriculture company in South America, entered into joint venture with Canada-based Avicanna to cultivate and process cannabis. Daabon is now the largest agro company in the world with an active participation in the marijuana industry.

On the earnings front, we saw multiple companies report results, including GW Pharmaceuticals and Insys Therapeutics.

“It wasn't the numbers that stood out but their other comments in these reports,” Debra Borchardt, CEO of Green Market Report told Benzinga. “For GW Pharmaceuticals, that company insisted that cannabis will be rescheduled in order for its drug Epidiolex to be launched. So far there has been no word from the FDA regarding a move like this. With Insys, it was their decision to settle with the DOJ for its kickback scheme to the tune of $150 million to be paid over the next five years.”

The other big news this week was the addition of chewing gum heir William Wrigley to the board of Surterra Wellness. “He also helped them raise $65 million,” Borchardt added.

MedMen recently completed its investment in The Hacienda Company, which owns Lowell Herb Co, marking its first outside investment. David Elias, CEO of Hacienda, told Benzinga that, “Given that MedMen is California's leading cannabis retailer, the fact that they choose Lowell as their first strategic brand investment is a huge honor and a big win for our company.”

Global cannabis brand Tikun Olam said it would be entering the Puerto Rican market through an exclusive licensing agreement with iaso Corporation.

“It is exciting to work with people who think deeply and creatively about the industry. Courage in its convictions, investing in turning ideas into tangible realities – that is iaso,” Bernard Sucher, CEO of Tikun Olam USA, told us.

“It was important to us not only help the creators monetize their efforts, but really to create a brand-safe environment for our industry. In their efforts to clean up their acts, much of the adtech community jumped to blacklisting advertisers as opposed to working with them to find the right opportunities for their brands. We want to cater to those brands, those legitimate enterprises looking for premium ad inventory, in a way that no social or publishing platforms can currently offer,” CEO Adam Levin told Benzinga.

Isodiol International Inc (OTC:ISOLD) entered into an agreement with ALTIS LLC to offer CBD products to Olympic athletes. Spokesman and former NFL Champ Marvin Washington highlighted the importance of educating “players, coaches, parents and fans on the value of using cannabis to help athletes with performance, recovery and sleep.”

Related Link: Football And Weed: Former NFL Players Weigh In On Why Many Are Getting Involved With CBD Companies

Benzinga writers Dustin Blitchok and Javier Hasse got previously undisclosed details about the cannabis brand that legendary musician David Crosby intends to launch soon. “Mighty Croz” is set to debut soon, and will be aimed at baby boomers… and their now-grown kids.

Axim Biotechnologies Inc (OTC:AXIM) announced positive results from stability and dissolution tests performed on its prime drug candidate, MedChew Rx® chewing gum. The results showed that the Active Pharmaceutical Ingredients (APIs) in the gum remained stable throughout the test and that the availability of the APIs were greater than 90 percent.

“This is great news especially for the company's current clinical trials using the drug for the treatment of pain and spasticity in Multiple Sclerosis (MS) patients, which effects mores than 2.3 million patients around the world,” the company said.

“While we knew our controlled-release chewing gum delivery system would deliver the molecules with increased bioavailability to the body, we needed to ensure that the molecules would remain stable and available in this format. Not only did we see this, but we measured an industry-leading stability in THC, which is a notoriously unstable molecule,” added George E. Anastassov, CEO of AXIM Biotech.

Cultivation products provider Growlife Inc (OTC:PHOT) announced financial results for the quarter. The company posted a 131.7 percent year-over-year increase in revenue. GrowLife CEO Marco Hegyi said, “During the second quarter, we sowed the seeds of leadership growth with functional, full-scale plant production in a licensed grow that is considered a game-changer by many customers.”

Kush Bottles, Inc. (OTC:KSHB) announced the launch of Kush Energy, “a new division focused on supplying the cannabis industry with tested, high quality solvents and hydrocarbons, which are essential in the extraction process for the production of products including oils, edibles and waxes.”

Terra Tech Corp. (OTC:TRTC) announced its second quarter financial results. Total revenues generated were about $8.7 million, an increase of 11 percent from $7.8 million in the same period in 2017.

“We're pleased with our quarterly results in light of all the heavy regulation that has come into California and other markets. The company is consistently experiencing double-digit revenue growth as the industry continues to expand and mature. The company is now putting most of its energy and resources into building a hundred thousand square feet cultivation and extraction facility to support its retail footprint.” CEO Derek Peterson told Benzinga.

Find out more about these news and others on Arena Pharmaceuticals, Inc. (NASDAQ:ARNA), General Cannabis Corp (OTC:CANN), Sugarmade Inc (OTC:SGMD) and Mentor Capital Inc (OTC:MNTR) with our friends at Marijuana Money, who make a weekly video summary of the top financial and business news in the cannabis industry.

Over the week, Benzinga’s Elizabeth Balboa reported that:

Aurora Cannabis signed a letter of intent to buy the cannabis business of HotHouse Consulting Inc., which supports about 50 customers globally; Khiron Life Sciences Corp (OTC:KHRNF) entered into a letter of intent to acquire the Latin American Institute of Neurology and the Nervous System, based in Colombia; and GrowForce Holdings Inc. closed a $29 million capital raise.

Hannah Genig took a look at hemp farming and whether or not it could save the bees.

And Tahira Rehmatullah, CFO at MTech Acquisition Corp (NASDAQ:MTEC) and Managing Director of Hypur Ventures was featured in out Wonder Women of Weed video series.

A study from the University of New Mexico (UNM) in partnership with Releaf App and Athletes For Care titled “Effectiveness of Raw, Natural Medical Cannabis Flower for Treating Insomnia Under Naturalistic Conditions,” was recently published in the Medicines journal. The report concluded that medical cannabis flower is with significant improvements in perceived insomnia. Read all about it here. 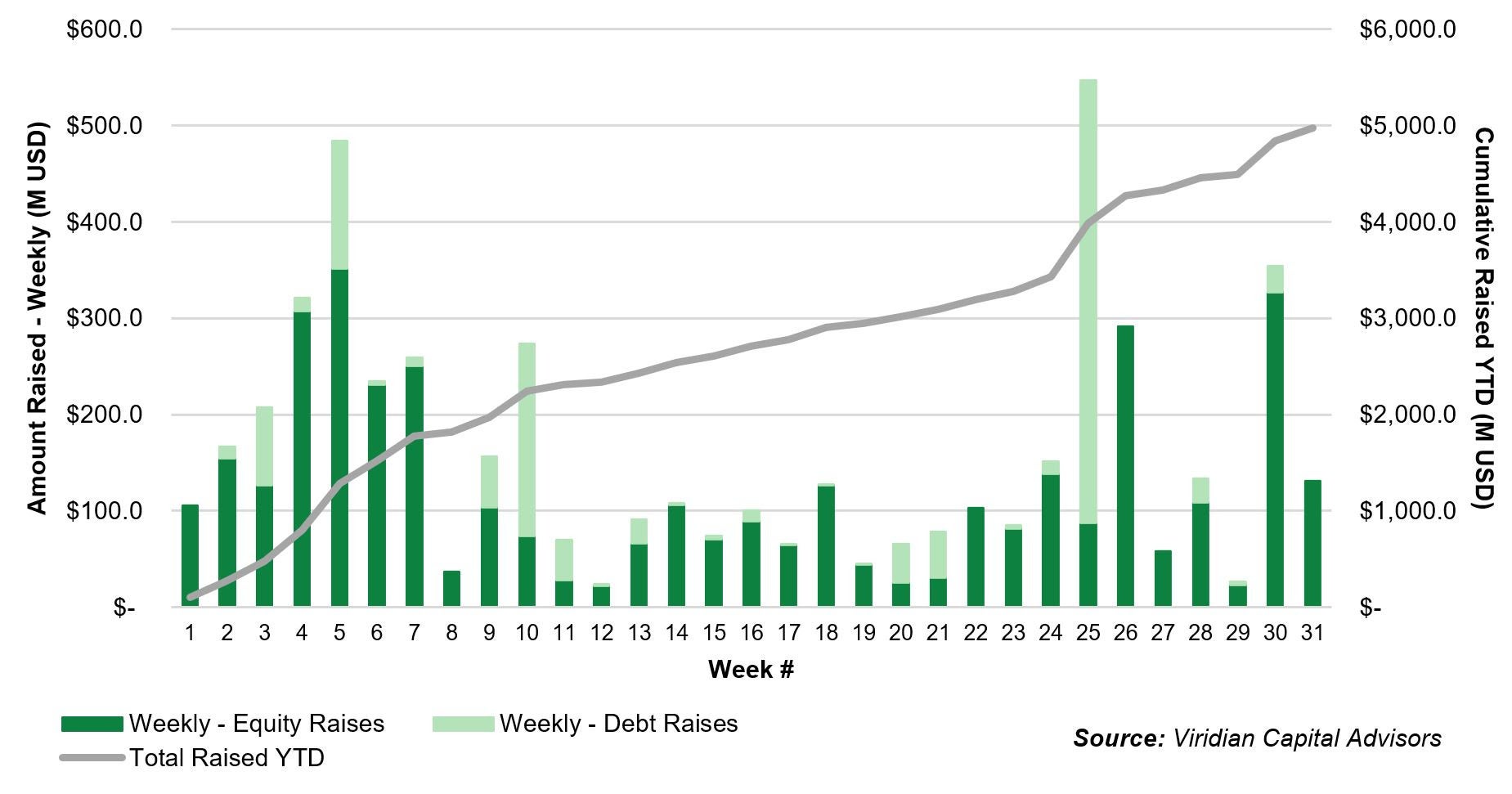 August 6-19: Thinking of a career change? Be sure to tune into Green Flower’s free Cannabis Career Summit here.

August 16: Famed cannabis lawyer Amy Margolis' cannabis-friendly co-working space The Commune will host an industry open-house in Old Town Portland, Oregon. "Attendees can learn more about the ongoing programming, space rental, and incubation opportunities available at The Commune along with an insider’s look at the application process for acceptance into The Initiative, the world's first accelerator program specifically for women cannabis entrepreneurs and executives, open to applicants worldwide."

August 22: Leafwire is hosting “The Future of Cannabis Pitch Competition” in Santa Monica, California. The prize also includes a $10,000 PR distribution from AxisWire and tickets to the High Times Cannabis Cup.

August 30: Grassposts.com is hosting the second even in its GP Connect Series at The Majestic in Los Angeles.

September 7-9: Oklahoma is getting its first Hempfest ever: the Hempfest Oklahoma.

September 14: New York City will see the “Green Market Summit – The Advanced Economic State Of Cannabis,” the first of a series of conferences titled Green Market Summit. This event hosted by Green Market Report will be held in partnership with The Street at One World Trade Center. The keynote speaker is CNBC and TheStreet’s Jim Cramer, who will interview Kevin Murphy CEO of Acreage Holdings. Tickets can be purchased on this website.

September 21-22: Anaheim, CA will get the CBD Expo West 2018.  Powered by CBD Health and Wellness Magazine, the CBD-focused event will feature 75 exhibitors, along with a large lineup of presentations and panel discussions from experts in the production, distribution and sale of CBD products. Tickets and can be purchased online; check out cbdexpo.net for more detail.