Tilray Inc (NASDAQ:TLRY) shot up over 25% on Wednesday following the release of the cannabis giant’s record fourth-quarter 2021 results and a bullish conference call where CEO Irwin Simon projected 2024 revenues of $4 billion. The stock made most of its gains in the first half-hour of the trading session, gapping up 11% and running another 11% higher by 10 a.m.

What Happened: Cantor Fitzgerald analyst Pablo Zuanic watched the move and issued a note in which he attributed Tilray’s price action to a short-squeeze and stated there was “too much noise to make a big deal about the qtr.” Zuanic complained that no pro forma sales numbers by division were included for the quarter, despite being included for previous quarters, and emphasized that Simon’s $4 billion revenue estimate is six times current levels.

Simon joined Javier Hasse and Patrick Lane on Wednesday’s "Cannabis Hour" to discuss Tilray’s quarter and his plan to grow the company. “I put a plan out there for $4 billion dollars by 2021. Some people might think I’m crazy or aspirational or whatever,” Simon said. He then went on to list how Tilray can increase its revenues to that level. He believes:

More and more consumers are going to buy cannabis

Tilray will have a good footprint in the U.S.

Tilray will complete acquisitions within its food and beer business.

Why It Matters: There was reason for investors to become excited by Tilray’s earnings print and buy the stock, which may have caused those who were holding a short position to cover. The number of shares held short on Tilray’s stock has increased slightly from June. Of Tilray’s 427.93 million share float 31.86 million shares are held short compared to 29.7 in June. This is down from May when 34.81 million shares were held short but up massively from 22.25 in April.

Zuanic's attempt to downplay Tilray’s bullish action as a short squeeze ignores the fact that for a short squeeze to happen traders and investors need to actively come in and buy the stock. And, Wednesday’s action certainly shows there were buyers.

The Tilray Chart: In the premarket on Thursday Tilray’s stock popped up over the 200-day simple moving average (SMA). The 200-day SMA is an important indicator because it demonstrates whether overall sentiment in a stock is bullish or bearish. Tilray’s stock has been trading below the SMA and on Wednesday’s big bullish move the stock rejected and wicked from the level. If Tilray is able to regain the level and make the 200-day SMA support it will be a great sign for the bulls going forward.

Both bulls and bears will want to watch Thursday’s volume to see what direction is coming next. Continued big bullish volume to drive the stock up or low consolidation volume and sideways action is a good sign for the bulls. The bears want to see large exiting volume before considering a position. 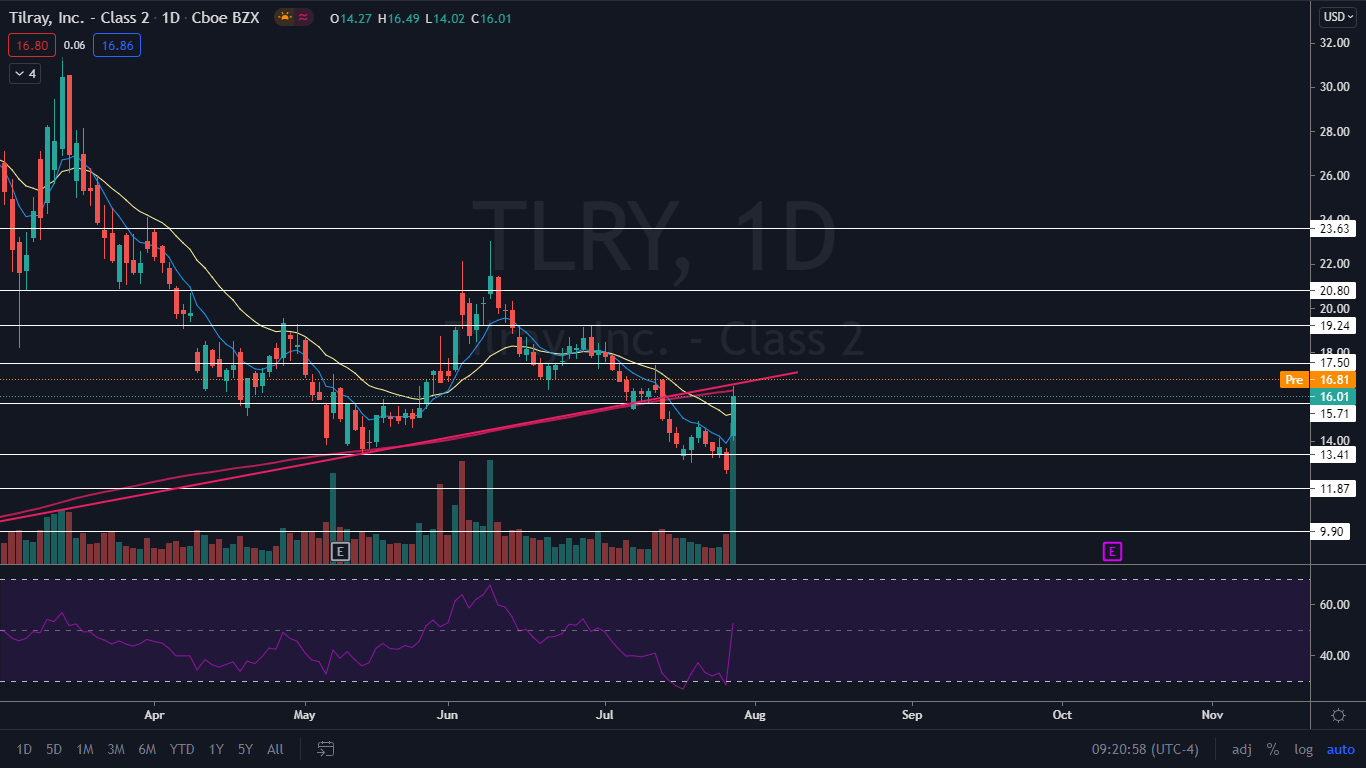 As COVID-related restrictions begin to ease across the globe, some industries are feeling the benefits more than others. When it comes to Canadian recreational cannabis sales, new Hifyre scanner data reveals a 10% improvement sequentially, noted Cantor Fitzgerald’s Pablo Zuanic in his latest industry report. read more

MedMen Enterprises Inc. (OTCQX: MMNFF) revealed Tuesday that it has secured $100 million in financing via a private sale of its units in a deal led by Serruya Private Equity. read more