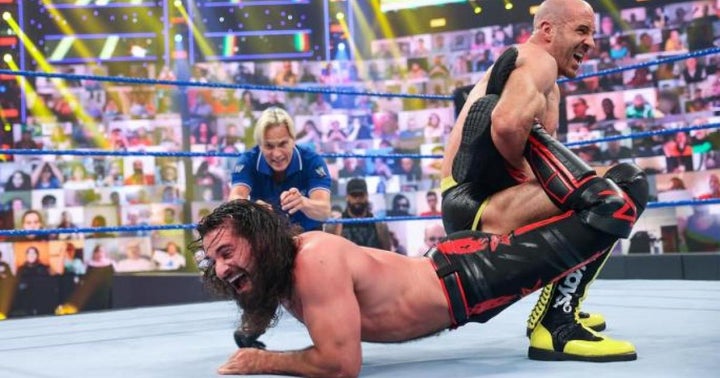 Hulk Hogan's signature move might have been the Leg Drop and John Cena may have perfected the Attitude Adjustment, but Needham senior analyst Laura Martin may someday be credited with the Financial Kneecap Whack thanks to a note that proclaims World Wrestling Entertainment, Inc. (NYSE:WWE) is a prime candidate for acquisition.

What Happened: Although speculation over a possible WWE sale has percolated before, it was mostly dismissed as social media rumors. But Martin, offering some of the most withering audacity this side of Piper's Pit, opined the company is on the way to being sold after licensing its U.S. OTT network rights to Comcast Corporation (NASDAQ:CMCSA) Peacock while shopping for a buyer of its international OTT network rights.

"The US OTT rights fees alone generated over 100% of 2020's total OTT Network's revs, so international fees are just gravy, and cutting out all OTT Network costs implies that this new
strategy has much higher ROICs than running a direct to consumer (DTC) business," she wrote in a note.

As a result of this situation, Martin theorized, there will be a price tag hanging from the squared circle.

"WWE's large long-term deals clarify for investors the most likely potential acquirers for WWE when it is sold some day, since we believe that WWE is too small to ‘go it alone' in today's streaming industry populated by giant companies," she wrote.

See Also: Every Wrestler WWE Has Released Coming Out Of Its Most Profitable Year Ever

What Else: Complicating matters for investors, Martin continued, were the corybantic bunch over at Reddit who drove up WWE shares during the week of June 7. Share prices went back to their previous level after a week in ascension. Martin berated the "pump and dump" game played by Reddit buyers and warned it would work against WWE.

"If an owner of WWE shares has the stomach to hold through the volatility, there is no long-term damage, but near-term confusion can drive some institutional holders to sell into strength and some don't reenter again after shares return to fundamentals-based levels," she wrote.

Martin maintained a Buy rating on WWE and a price target of $65.

Comcast Corporation (NASDAQ: CMCSA) is composed of a "collection of good businesses" but management has to take action to unlock value before investors can buy the stock, according to Wells Fargo. read more

Comcast Corporation (NASDAQ: CMCSA) is "ready to breakout" in 2021 after COVID-19 headwinds impacted its performance in 2020, according to BofA Securities. read more

Roku Gets Peacock Ahead Of Rivals And Gains Streaming Leverage