A bullish case can now be made for Baker Hughes A GE Co (NYSE:BHGE), while the bullish case for Weatherford International plc (NYSE:WFT) no longer applies, according to PiperJaffray.

The bullish case for Baker Hughes' stock is based on a combination of factors, Herbert said in the upgrade note.

The stock is trading at 12.4x the analyst's 2020 EPS estimate and 11.8x the Street's 2020 estimate. This represents a discount versus some of its peers, including Schlumberger Limited (NYSE:SLB), the analyst said.

Baker Hughes' balance sheet is "essentially best-in-class" among diversified service peers, with a net debt/cap of 6 percent and debt-to-EBITDA below 1x, the analyst said. The company's free cash flow generation is attractive and should generate $375 million in 2018, $1 billion in 2019 and $1.7 billion in 2020, according to PiperJaffray.

Weatherford's "prodigiously heavy" balance sheet is one reason for PiperJaffray's downgrade, Herbet said. The company holds $7 billion in net debt and about $580 million in annualized interest expense versus a market cap of $2 billion, the analyst said.

Any hopes of achieving a "satisfying resolution" to Weatherford's financial inflexibility are diminishing at a time when a business turnaround is taking longer than originally expected, Herbert said.

PiperJaffray's revised price target of $2.35 per share is based on 7.5x EV/2020E EBITDA, which represents a decrease from a prior multiple of 9x. This is justified given the company's unfavorable debt load and a slower pace of improvement in its  operational turnaround, Herbert said.

Shares of Baker Hughes were up 4.14 percent at the close Tuesday, while Weatherford shares were down 0.23 percent.

Baker Hughes, A Compelling Stock For The Conservative Investor 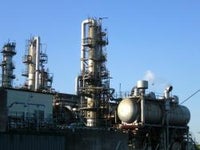 GE Will No Longer Be Baker Hughes Majority Owner