Mergermarket just released its global M&A report for the first three quarters of 2015. Here’s a breakdown of the key findings.

Through the end of Q3, the world has witnessed about $2.87 trillion in global M&A deals in 2015. That number represents a 21.1 percent increase over the first three quarters of 2014 and puts the world on track to break the all-time record for total annual M&A value this year, eclipsing 2007’s peak number of $3.66 trillion.

Despite the global boom in M&A activity, Central and South America have been left out of the party. Falling oil prices have weighed heavily on the economies of many countries in the region and total M&A values have fallen by an incredible 56.6 percent during the first three quarters of 2015. 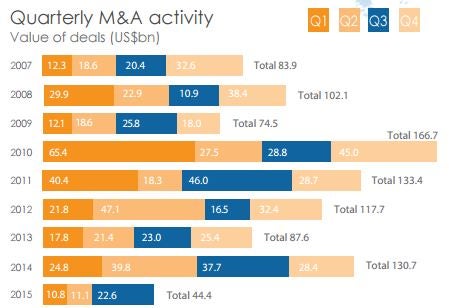 According to the report, the world has witnessed a record-paced number of $1 billion-plus mega-deals so far in 2015. The 43 mega-deals through the first three quarters of 2015 have been worth a combined $1.1 trillion. This year's total number of mega-deals falls only eight deals short of 2006’s record of 51.

Disclosure: The author holds no position in the stocks mentioned.

Why BG May Be Best Way To Play Shell Acquisition