Is The M&A Boom Over? We May Have An Answer Soon

In a report published Tuesday, JMP Securities analyst Devin Ryan pointed out that while the S&P 500 lost 6.3 percent in August, the losses occurred at a time of increased M&A announcements with total announced M&A volume exceeding $350 billion, marking a 20 percent increase from August 2014’s activity.

With that said, it is not certain of heightened M&A activity will continue into September and beyond.

Ryan pointed out that there exist three characteristics that are “prevalent” at an M&A cyclical top, including: 1) “steep” equity market declines, 2) a recessionary period to follow and 3) a “significant” deterioration in the credit landscape.

“Our conclusion is that the recent equity market decline increases the probability of a M&A market disruption, but one month alone generally has little impact,” Ryan wrote.

“Accordingly, we think the current upcycle remains intact as of now, but are watching equity markets particularly closely, as we believe performance in September is critical to whether the direction of M&A continues to move forward or begins to roll over.”

Ryan continued that a “flat-to-up” equity market performance in September would “likely keep” the M&A momentum going. On the other hand, if the equity markets lose “a few percent, or more” in September, this could “create headwinds” for future activity as sellers may become less interest in selling, while buyers likely have “diminished confidence” in potential acquisitions.

Companies with direct exposure to the M&A cycle (e.g., investment banks and advisory firms) have been hit “particularly hard” in the recent selloff, according to Ryan. The analyst pointed out that fluctuations at many firms have reflected “specific nuances” – as an example Lazard Ltd (NYSE: LAZ)’s assets under management have been negatively impacted from declines in emerging market valuations that weighed on the stock.

However, Ryan added that Lazard has experienced an “active pace” of deal closings and revenue recognition while its backlog is “still strong” with an estimated 106 deals at the start of July.

Other firms, such as Evercore Partners Inc. (NYSE: EVR) were “particularly active” in August with 18 announced deals. The analyst estimated the firm’s revenue backlog is now approximately $310 million, compared to $280 million at the beginning of July. On the other hand, August was a “relatively slow month” for Greenhill & Co., Inc. (NYSE: GHL) with two announced deals; September is “off to a similar start.”

Bottom line, if the equity markets stabilize, the entire group “represents compelling value” given little disruption to M&A activity. If equity markets “deteriorate” in September, it could lead to M&A “deterioration,” which could result in a headwind for advisory and investment banking firms, but this could create a long-term buying opportunity for investors with longer-term horizons. 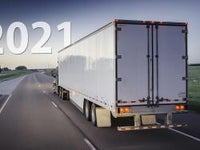 Several analysts have published transportation outlook reports for 2021 that are calling for continued strength in the trucking markets. Some are expecting the favorable truckload fundamentals that were in place in the back half of 2020 to continue unchanged though 2021. read more

UPDATE: Morgan Stanley Maintains Overweight On Evercore, Raises Target To $97 Notes 'EVR's 9x multiple is still well below peers at 12-16x, suggesting some skepticism on forward earnings growth. We disagree and look for 22% upside from here'